You are here: Home / Uncategorized / birthday trip to savannah – day 1

A few months ago, Mr PugRunner told me not to make any plans for my birthday weekend. He wouldn’t tell me what we were doing, but I was pretty excited.

About a week prior to our departure, he told me he was going to show me a picture a day for three days, so I would have a chance to guess our destination. It was a really sweet idea, except for the fact that he showed me a picture of Forsyth Park, and I guessed right away that we were heading to Savannah!

We have been twice before, but both times were quick stops, and we had little man with us, who had no interest in cemeteries, historical houses, architecture or the like. This was just going to be us for three days and two nights, doing whatever I wanted to do. I immediately started planning. I reached out to my friends on Facebook for advice on places to do and things to see, and then pulled things from the web. By the end of 24 hours, I had a rather complete and ambitious spreadsheet of plans.

We left on Thursday morning, after dropping little man at school (he was pretty thrilled to be spending the weekend with his grandparents). We hopped in the car, grabbed coffee and pastries from Starbucks and headed northward.

The first thing I wanted to do was tour the lighthouse at Tybee Island. I kind of love lighthouses, and I think it’s neat to visit them in other cities. Also, there was the lure of climbing 178 stairs. We arrived right around lunch time and I thought it would be wise to get all the heavy duty work out of the way before taking our meal. 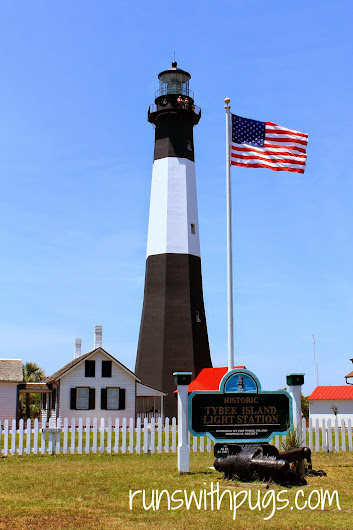 Our admission covered the lighthouse, and adjacent buildings (which were for the lighthouse keepers and their families, a turn-of-the century beach cottage and a replica military battery across the street). Everything is staffed by volunteers, who are happy to chat about the properties and answer questions.

I was ready to get started.

The 178 steps seemed to fly by – I was kind of surprised when we reached the top, and was excited to get outside. 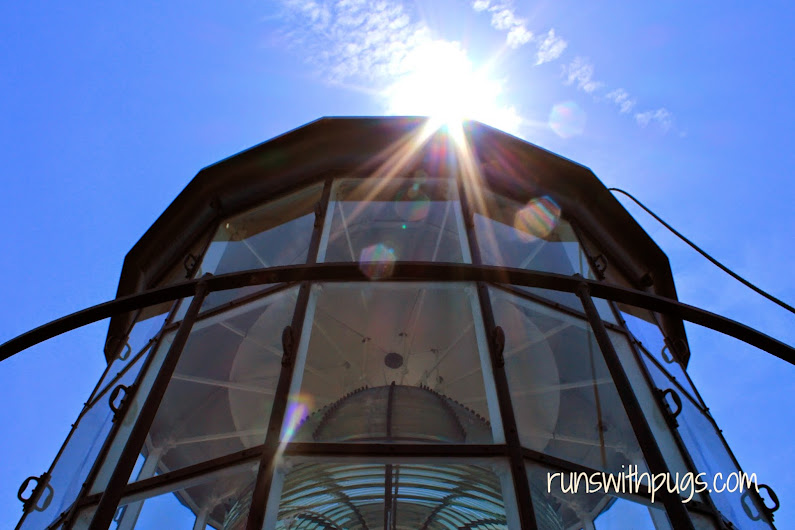 The view was breathtaking. Unfortunately, Mr PugRunner wasn’t able to join me to admire it. He’s been experiencing some anxiety about heights, and while he’s been outside of lighthouses before, on this day, he couldn’t do it. I felt bad for him but he told me to go and enjoy while he waited inside.

When we were back on the ground, we explored the rest of the site, before packing it in to go to lunch.

The Crab Shack had come very highly recommended, and it was going to be a little change of pace for me. I don’t normally do low country boils or peel-and-eat anything (I’m not really a fan of working for my food), but I was determined to be adventurous. 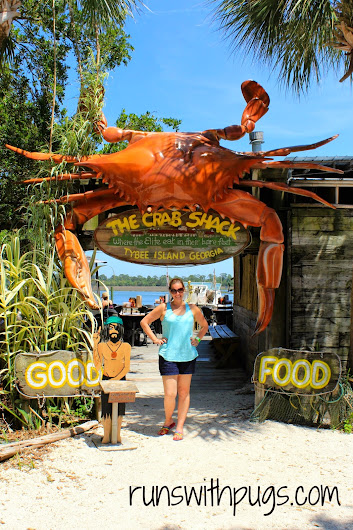 We ordered the Shack Specialty Platter for two with two kinds of crab, shrimp, mussels, sausage, potatoes and corn. It was supposed to come with crawfish but Mr PugRunner doesn’t care for them, so they let us sub in cole slaw instead. 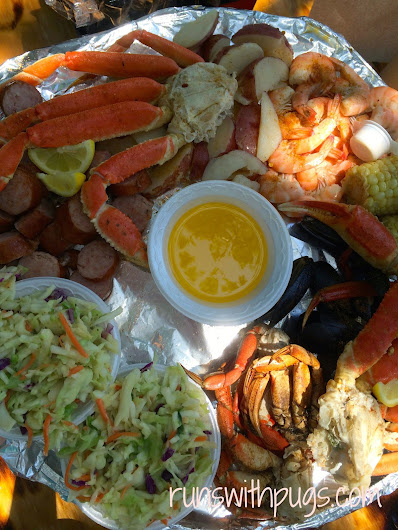 Messy? Yes. Delicious? You know it.

We enjoyed our fill, loving the view and the company. 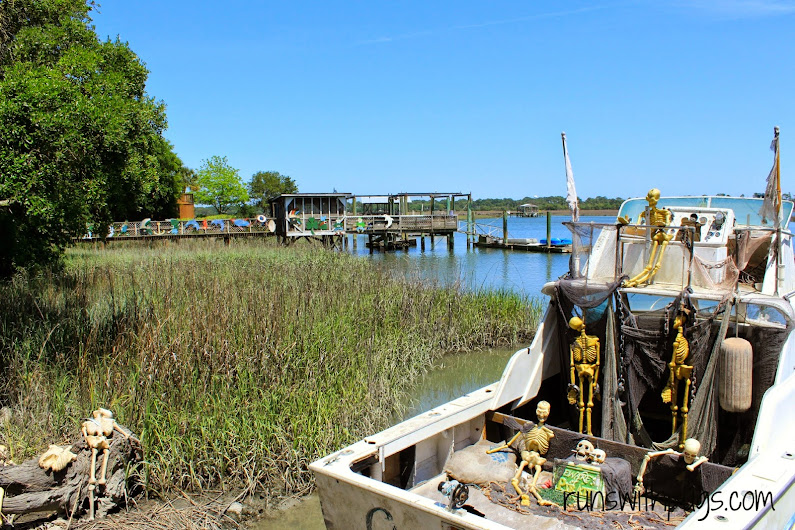 Everything was so peaceful and relaxed.

Now that our bellies were full, we were exhausted, so we decided to drive into the city and check in to our hotel. It took about 30-40 minutes to get to the Westin Savannah Harbor Golf Resort & Spa, and we were in our room shortly thereafter. Mr PugRunner wanted to go to the pool and I wanted to take a nap, so we split up. I don’t think  I got much sleep, but it was nice to get some rest.

For dinner, we wanted to visit The Olde Pink House. We had heard that it was a little on the touristy side, but that the food was excellent, so we took the ferry from the hotel to River Street and began walking.

The restaurant was located across from a beautiful square, and it was absolutely gorgeous in the setting sun.

We took seats in the bar in the back of the restaurant, with huge glass doors that opened onto the street. Our server was extremely helpful in directing our menu choices, and we settled on the Habersham Platter with Shrimp & Grits, Crabcake and Seared Scallops, a Fried Green Tomato on the side, and a salad of mixed greens with caramelized apples, pecans, a goat cheese fritter and champagne citrus vinaigrette. Everything was outrageously good (the Shrimp & Grits was among the best I’ve had and the salad was bright and creative). We will definitely be back.

Afterwards, we wandered for a bit, enjoying the beautiful cobbled streets and pretty buildings. 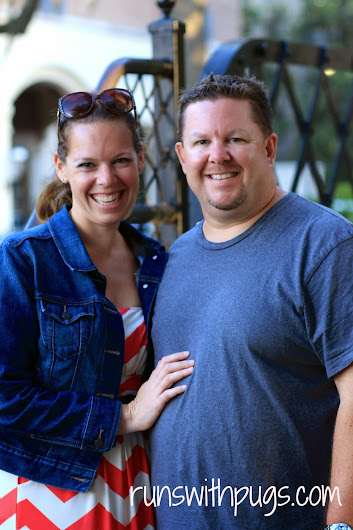 And then we found our way to Lulu’s Chocolate Bar for some sweets. I was completely overwhelmed by the extensive menu of desserts and treats, and I think it made it hard to enjoy. Mr PugRunner ordered a chocolate martini and the suspension cake, while I got a glass of pinot noir and a cappuccino brownie with cinnamon mascarpone and ganache. 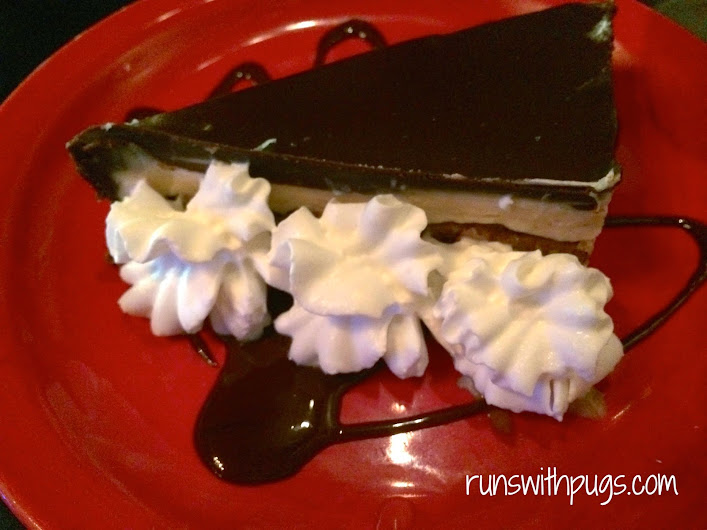 It was good and beautifully served, but I would have been happiest with just the brownie part (very rich and fudgy). Mr PugRunner cleared his plate, and declared that he wants suspension cake for his birthday. We loved the ambiance and the vibe, but I didn’t love it as much as I, an unapologetic chocoholic, expected.

Since it was getting late, and we were exhausted from all the fresh air and trekking around, we found our way back to River Street to wait for the ferry. 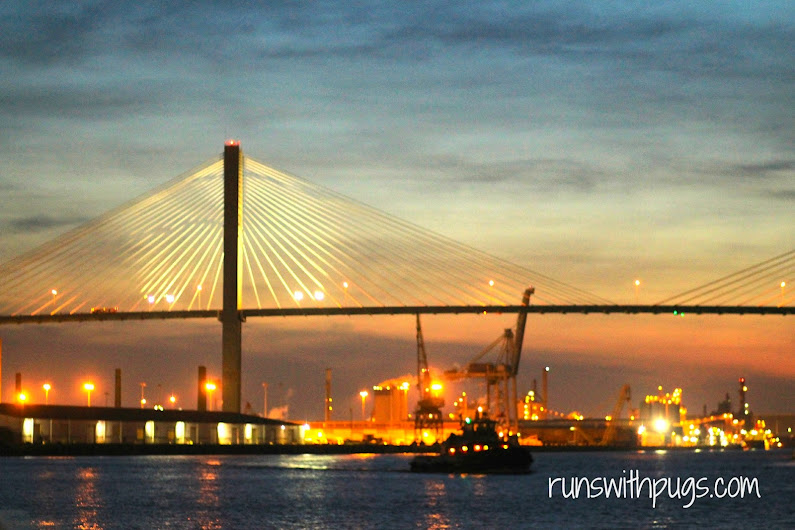 It was a glorious evening and it seemed a shame to call it a night, but I had huge plans for Friday and wanted to rest up. We’ll continue later this week!

Do you enjoy visiting historical cities?

Do you ever use vacations to step outside your comfort zone with eating and exploring?