For some reason, I’m not a huge fan of Tuesdays. What Monday is to most everyone else, Tuesday is to me.

So it should really have come as no surprise that Mr PugRunner chose yesterday, Tuesday, to approach me with this little gem.

Apparently, little man has a bike and Mr PugRunner has a bike, and what they think would be really special would be if MOMMY had a bike, so we could do family bike rides.

On the surface, that seems very lovely. Really. 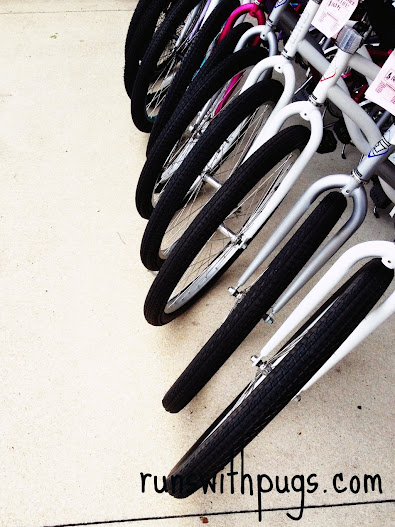 But the thing is, I’m a bad bike rider.

I read so many triathlon training blogs and I’m sad because I would never survive the riding portion. I can swim for days and I can run, but there is no way I could manage that two-wheeled apparatus without taking a tumble. When I hear about other athletes struggling with swimming, I try to point them to duathlons, which would eliminate their trouble spot. However, duathlons tend to lean towards running and biking, not running and swimming.

And what I cannot do well is bike. I wobble. I swerve. I get anxious when anyone rides too close to me (defined as within 52 feet), and I absolutely panic if there are cars around (defined as anywhere in the immediate county). I’m surprisingly uncoordinated, which makes it difficult to do things like brake and not fall. I don’t even want to discuss the helmet, which I know will throw me off balance.

Also? Bike seats make my butt look fat. But that only counts for about 14% of my concerns.

I looked at Mr PugRunner and did what any rational partner would do in the face of conflict. I offered up a reasonable, alternative solution.

“Maybe we could get a horse instead?” I mean, really. You can ride a horse at the same pace as a bike. And horses are much cuter and more loving than bicycles. Everyone wins.

Inexplicably, this idea was shot down almost instantly, as were my follow up suggestions: A) an adult-sized bike trailer in which I could ride or B) a magical unicorn.

It’s like the man refuses to work with me.

Mr PugRunner went on to present some more arguments. Biking together would be a great family activity. It wouldn’t be expensive, because we could find a secondhand, barely used bike. Little man needs the extra bike time because that’s the only way he’s going to get rid of his training wheels.

I pointed out that we could do awesome family activities, like go to the children’s opera and take tours of historic things in the city, and that bike practice is such a great daddy-son thing. I think it goes without saying that you don’t get your bike-riding deficient wife anything that may have questionable brakes and/or that isn’t pink and glittery. Am I right?

Of course, none of the above moved him, because clearly Mr PugRunner hates culture and history and unicorns. And apparently, there are tons of great bikes on Craiglist and swap sites looking for new homes (presumably purchased by husbands for their non-bike-riding wives which were assembled, taken out for a test drive, and then parked to rust in the garage after someone rode too close within the 52 inch space bubble, causing hyperventilation and tears).

So we’re at an impasse. 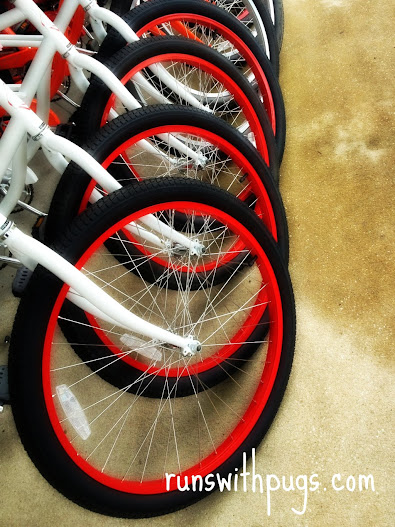 I really want to have this so-called “family time” but I also like being free of road rash and broken bones. So there’s that. I don’t want to spend time scouring Craigslist and garage sales, on the hunt for the right used-but-barely-used bicycle. And I don’t want to make a fool of myself in front of my entire neighborhood when I lose control if a car happens to pull out several blocks away.

Maybe if I tie some wheels to a horse, Mr PugRunner won’t notice.

Any thoughts on how I’m going to do this?

Do you love or loathe biking?

Be honest. Should I just get the horse now and beg forgiveness later?