Thursday was the day.

Little man’s school offers a staggered start for Kindergarteners, so we chose for his first day to be Thursday. That way, he would have two consecutive days before the weekend, to kind of get into the swing of things.

On Wednesday, I decided we would do our back-to-school pictures. I knew we would be rushing around like lunatics on Thursday, and I didn’t want to be stressed over it. I found a nice little pathway, and set little man up with a chalkboard sign and some apples. 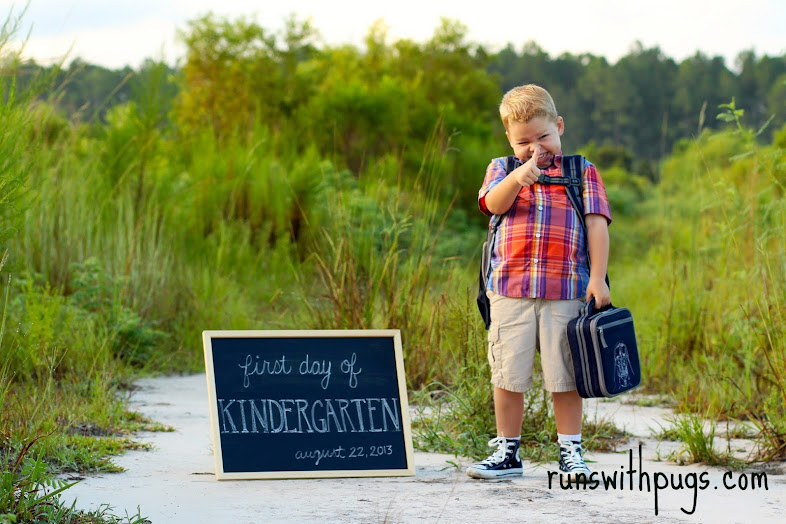 This kid was born ready for school. 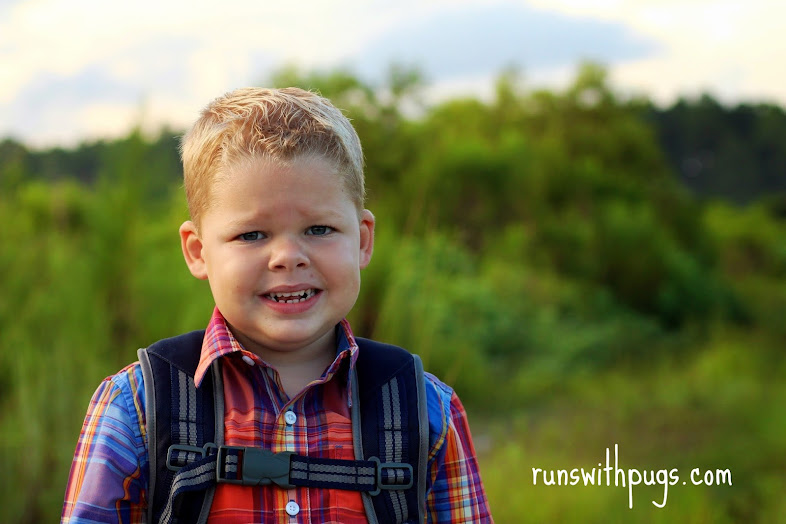 Of course, no photo shoot is complete without some silliness. The promise of getting to goof around is what keeps him focused for me.

Twenty-four hours later, it was the real thing.

We picked up his friend and headed off to school.

Fortunately, we were the first ones there, so we got to hang around for a few minutes to see him get settled in to his classroom and chat with his teacher.

Seriously. The thumbs ups are getting out of control.

So far, we love his teacher, and I am so excited to start my duties as Room Mom. I have a Pinterest addiction that needs direction, and I am pretty excited to put it to good use.

After little man got his belongings situated, he bounded over to us, gave us hugs and kisses and headed off to start his first day.

I didn’t cry. I was close, but I stayed strong.

Don’t get me wrong. It’s hard. Even though he’s been in preschool, it was so much smaller and less official. This, though. This is the real deal. But it’s also his time. He’s so independent and so proud and I just can’t be sad about that. Instead, I’m excited for him as he embarks on this new journey, and for all the opportunities it will bring.

In the meantime, Mr PugRunner and I went to breakfast. There is a place that recently came to my attention that specializes in biscuits: Maple Street Biscuit Company. And, quite frankly, I have yet to meet a biscuit I didn’t like.

Check out the size of this piece of chicken.

It was definitely a knife and fork kind of sandwich, and there was no way I could finish the whole thing. However, the chicken was perfectly fried, juicy but not greasy, and the bacon was crisp. The maple syrup added just a touch of sweetness, reminiscent of chicken and waffles. It was delicious.

We split an order of the breakfast potatoes: perfectly crisped potatoes with peppers and onions, cubed ham and cheddar cheese. I, personally, could have done without the ham, but it was yummy all the same.

We will definitely be back. Next time, I want to try it for lunch. 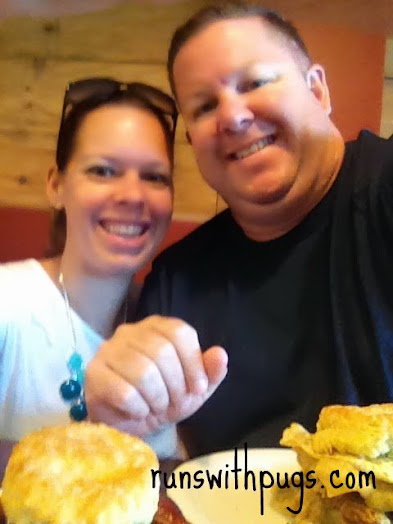 It was nice to have a little morning date. And it served as a bit of a distraction as I waited for the time to pick up little man.

At the appointed time, the bus rolled up and little man came down the stairs, pretty much grinning from ear to ear. The highlights, for him, were the bus ride and buying his lunch in the cafeteria (we reviewed the menu and he will be allowed to purchase once or twice a week, choosing his favorite meals). They got to tour the school, visit each of the different resources (like art, music and PE), and get instructions on their new routine. He met some new friends and played on the new playground.

In fact, the only negative was the fact that we had a tornado warning in the area, and during the day, the students had to head into the hallway and sit with their heads between their knees. He was a little nervous about that, but his teacher did a good job of making them feel secure and we talked about it before he went to bed, and it didn’t seem to bother him any more.

He was absolutely exhausted, but we were so happy to see him so excited.

I think it’s going to be an amazing school year.

If you have a little one, how was his or her first day back to school?

How about if you are a teacher?

What’s your favorite back to school memory?

26 Responses to first day of kindergarten