Posted on September 8, 2014 by runswithpugs

Week 11!  This week was supposed to be a bit of a break for my training, which is great, because my heart and my legs just weren’t in the game.  I did one race, one yoga class, and one other run. Not to say that I wasn’t busy, of course, but I just couldn’t get going with my running.

Sunday was kind of a lazy-ish day. We all stayed in bed kind of late, and then hung out in pajamas for a bit. We ended up running to the sporting goods store because little man needed new cleats for the start of baseball season (the child’s feet grew two sizes over the summer!!!!). Then, we went out to dinner with my mom and stepdad. It was lovely and much needed. Bedtime was early, because we had a race in the morning.

This was just a lovely 5K. For the first time ever, I spent the entire 3.1 miles running with someone, and I have to admit, I kind of liked it. It wasn’t a PR, but I felt pretty good. More on that with my race recap later this week. We registered little man for the mile fun run, too, and he had a blast. 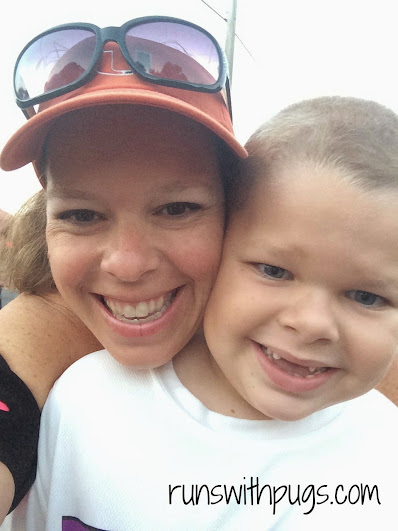 I met a friend for coffee and then helped with some envelope stuffing for a school fundraiser.

Oh, this was so needed. We went through so many flows that were heavenly for my hips lower back. By heavenly, I mean hurt like heck and left me feeling all wrung out. In a good way. You know how that is. The little alligator was back to swimming in the lake, and the sunrise was lovely.

After the practice, the instructor sliced up a dragon fruit she had brought for everyone to try. It was quite good – a bit like kiwi with the texture of a pear.

I had to get up and out early for a bunch of meetings at little man’s school. I am really enjoying the extra volunteer work I have going on there. I love being involved and I also love the things I am getting to do. It’s already such a great school year for both of us.

After all that, we had another meeting after dinner with little man’s baseball coach to discuss the new season and practice schedule. It was a late night, and I about fell into bed when we got home.

First, this happened (Could it BE any hotter out? I think not.)

And then this happened.

After school, Mr PugRunner took little man to his hitting lesson, karate class and out to dinner, while I watched The Other Woman with some friends. It was cute. I also just recorded About Time. I caught the last hour of it while I was cleaning the house and ugly cried my way though that, so now I need to see the whole thing. I’ll be sure to hydrate before hand.

I did intend to get up and run 3.1 miles, but I went to be super late on Friday night and it was kind of nice to not rush out of bed. We were thinking about taking little man to see Guardians of the Galaxy since the weather was so nasty, but decided to skip it and just meet up with the Hurricanes Club to watch the UM vs FAMU game. We even had some special people show up to help us cheer on the Canes!

Little man ended up with a new friend, too.

Even better? The Hurricanes won! Yay!

And that was it. I think my legs appreciated the bit of a break. It was good to have that race in there and it was also good to just get some extra morning sleep.

This week will involve some 3 milers and a long run of 15 miles. Officially, that will be my longest run, which is pretty terrifying. It will also put me over the halfway mark towards my marathon goal. (OMG!)

Of course, now my priorities are shifting, and I am starting to think of marathon race day outfits. You know, because that’s important.

Are you glad that football season is back? What games did you watch this weekend?

Costume or no costume for marathon day?