it’s great. to be. a miami hurricane.

Posted on October 1, 2014 by runswithpugs

Few things bring this family closer together than college football season. I am a University of Miami alum, Mr. PugRunner is a huge fan, and we are raising little man in this great tradition of The U.

Unfortunately, we live pretty far away from Sun Life Stadium, where the Hurricanes play. And of course, with school, sports, extra-curriculars and racing, it’s challenging to get a weekend away to go see them. Insert all the sad faces. Football weekends are such a pivotal part of autumn, and it’s tough not being part of the action.

However, little man had been asking about seeing his favorite college team play, so we consulted the schedule, found a free weekend and found a team that wasn’t much of a rival, where crowds would be low and emotions wouldn’t be raging: Arkansas State. Mr PugRunner got some great seats through our local Hurricane Club and we planned to stay with some friends near the stadium.

Kickoff was at 3:30 PM, so we planned to meet our friends a little after noon to tailgate for a while. The weather was less than promising, but at least there was a very cool breeze and humidity was low. 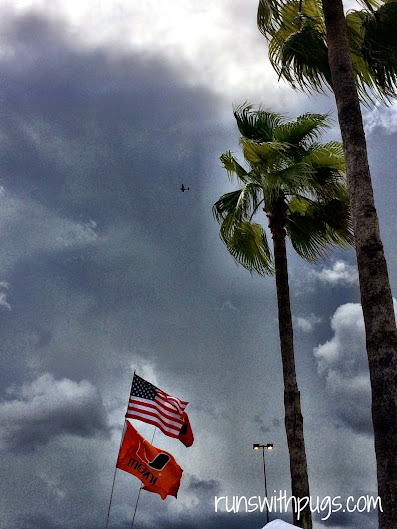 At around 1:30, Mr PugRunner took off with little man to see the “Hurricane Walk.” This is when the Hurricanes’ busses pull up and around the stadium, allowing the players to walk into the locker room to suit up through a crowd of chanting, cheering fans.

Little man got his picture taken with Sebastian afterwards. 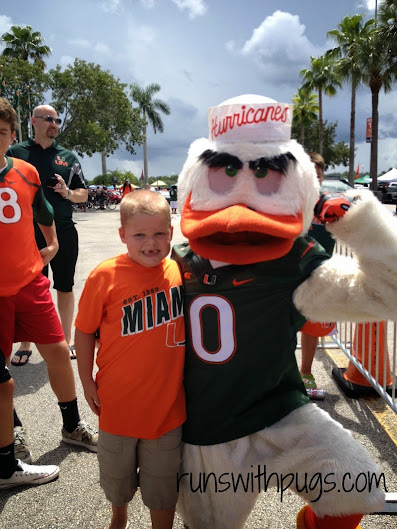 We had a nice crowd for the tailgate, along with some delicious food: I had brought meatballs and iced cookies, and our friends had ordered wings from Bru’s Room (simply the best wings ever). Of course, there was beer and chips and all kinds of yummy football treats.

Finally, it was time to pack up and head inside. We arrived at our section just in time to see the Miami Hurricanes charge through their signature smoke. Little man loved it! 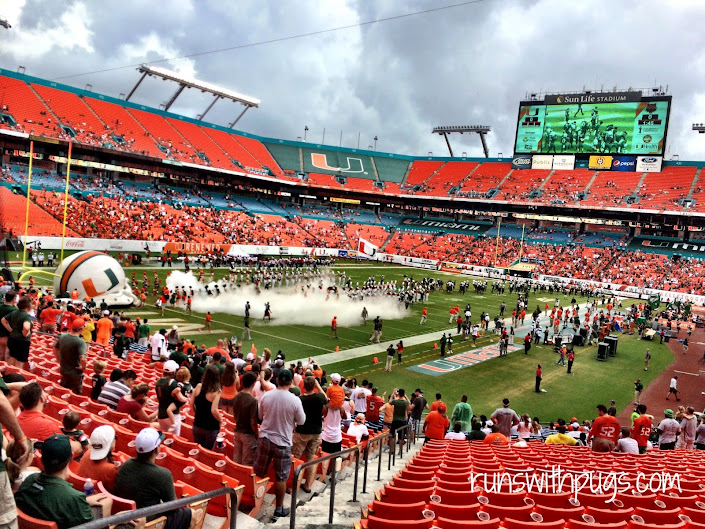 Our seats were in the end zone, right next to the student section. We had a great vantage point and little man was pretty involved in the action. I loved watching him cheer and sing all the Miami songs. It’s hard to capture that kind of enthusiasm when we’re watching the games on TV, especially with a child, but here in those orange seats, he was riveted.

The rains came at halftime, but we stayed dry in the concourse, getting our last drinks and snacks, while visiting with our friends (who had seats in a different section). We had ponchos, but torrential downpours are never fun, so my girlfriend and I stayed behind until the storm cloud passed (just a few minutes into the third quarter).

It also gave me time to snag one of my South Florida favorites: an arepa.

For some reason, this lovely bit of melted mozzarella cheese sandwiched between sweet grilled corn cakes never tasted quite as good as it did in the old Orange Bowl, but it’s still something I never get to have, so I enjoyed the heck out of a few bites.

Hurricane favorites Brad Kayaa, Duke Johnson and Phillip Dorsett did a fine job at pulling out a 41-20 victory over the Arkansas State Red Wolves. Of course, they had a little fourth quarter encouragement from a special fan.

It was such a special day for all of us. I only wish we could do it more frequently.

While it was a long and exhausting weekend (I think I’m still trying to catch up on sleep!), it was so very worth it.

What are your favorite traditions to share with your family?

Do you have a stadium/fair/concession treat that you can’t resist? Tell me about it!

13 Responses to it’s great. to be. a miami hurricane.