So far, I am loving December!

Things are clicking and falling together, and it’s just so nice to feel like all the hard work is paying off.

Angie and I were up before the sun so she could experience her first official 5K race. Even though it was freezing, I am so glad this was the one she got to run. And I’m also so excited that I could share it with her. Race report to come, but it was a fabulous day!

After house guests and entertaining, Monday was a day of nothingness. Sure, I squeezed in some food shopping and laundry, but that was it. Hard as it is for me to stop and do nothing, it was needed.

Temperatures dropped again, and for some reason, this week, I couldn’t get warm. I decided that the only thing I wanted to do was take hot showers and eat soup. I ended up making a delicious pot of chicken soup with dumplings, loaded with lots of veggies. Delicious. Sometimes, it’s the little things.

I cannot begin to tell you how scared I was for this run. Eighteen miles. What kind of reasonable human being does such a thing? On a Wednesday, no less? But, it needed to get done. I downloaded some new music (including two of my favorite pieces from the Rudy soundtrack) and three episodes of the Serial Podcasts, took some deep breaths and set out.

Because the temperature was super low, I didn’t need to leave at the crack of dawn. By the time I got out the door, it was close to 6:30 and that was fine by me. For a while I felt like I couldn’t get warm, despite my gloves, capris and long sleeves. I churned out eight miles and that’s about when I started warming up. I swung by the house to hit the restroom, change into lighter clothes and compression socks and have a drink, and then I got back out there.

The new material on my iPod helped. The music was incredibly motivating and the Serial Podcast is riveting. I don’t know what I’m going to do when I finish listening to it. I never thought I would be able to actually run to speaking rather than singing, but the miles melted away as I followed the first few installments.  My run wasn’t over by the time my episodes were up, but I was ready for some tunes by then, and switched back over.

Mr PugRunner was also awesome. He texted me a few times to ask me if I needed anything. I was hanging on fine, but with three miles to go, I did need some more Gatorade and I asked him if he would meet me with a cold bottle and some pretzels. He sped to the rescue, and I was so grateful that he was able to do that for me. We chatted for a minute through the car window while he refilled my handheld, and then I was back at it.

Finally, it was over. And to be honest? I felt darn good. There was a little bit of soreness, but it went away after some stretching and a hot shower.

I never thought I would be able to complete 18 miles. It was an amazing feeling.

After school dropoff,  I had to pick up some craft supplies and wrapping materials and then it was time for our PTA holiday party. It was a lot of fun with some yummy food and drinks, and I loved spending time with some of the amazing women who do so much for the school. We did a white elephant gift exchange, and while I am not the biggest 50 Shades of Gray fan, I think this gift was pretty fabulous. 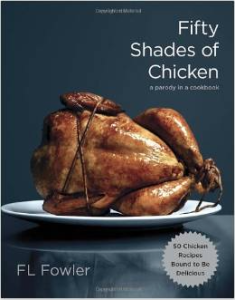 Fifty Shades of Chicken: a parody in a cookbook

Some of the recipes looked rather delicious, too.

I opened up “Santa’s Workshop” and started wrapping presents, and when little man got home from school, we worked on his Christmas gifts. After he went to bed, I added the final touches and… started packing! We were going on a surprise vacation!

The day had finally come! We would be leaving after school for our family trip to Universal Studios! Little man had NO idea we were going, and it was a special reward for him. Even more awesome was that his grandparents would be joining us. I knew he would flip!

We picked him up from school and we had to break the news when he saw the suitcases in the back of the car. His face lit up like a Christmas tree and he couldn’t stop saying thank you. Heart? Melted.

It didn’t take us too long to make the drive and we checked into the Cabana Bay Beach Resort in time to freshen up and grab dinner.

We had hoped to enjoy a yummy meal (we did) and then go to Downtown Disney to see Santa, but the traffic was insane and parking was a nightmare. They are doing some serious construction in the area (I believe to expand the actual Downtown Disney parking), but by the time we found a spot and made the trek over, it would be time to leave, so we went back to CityWalk to wander around instead.

Little man was up at 5:00AM, bright-eyed and bushy-tailed and raring to go. Sometimes, you just can’t fight it, so I got up and got ready with him, and Mr PugRunner, who really thought we would be sleeping in a little (silly man), joined us. It was a long, long, LONG but amazing day, and I was so happy that we were all together to enjoy it. I’ll share the full details later in the week, but it was a fabulous vacation!

This was a great week. Twenty-miles and countless hours of awesome family time.

The marathon is less than a month away. Four weeks, I think. I also think I can fit in two more long runs. Those 26.2 miles are going to be scary no matter what, but after this week’s long run, I feel better and better about reaching my goal.

How was your week? What goals have you smashed recently?

What’s something you’ve done lately that just put a huge smile on your face?