Little man has been asking and asking and asking to run a 5K. I wasn’t opposed to the idea of it (he’s six and active with all the energy and stubbornness that goes along with the age), as long as the weather was reasonable and he was sure about it. When Mr PugRunner mentioned that he wanted to run the Gingerbread Man Dash 5K, I thought it would be the perfect opportunity. It was a small, extremely close and family (and pet) friendly run. I had friends who would be running for PRs and who would be walking with their kids. It would be a good environment for a first 5K, and I was excited when little man gave me two thumbs up and told me he would be on board.

Since I was signing up for the fun of it, I thought it would be neat to have costumes. I get a little silly that way. I planned to dress as a snowman, because I had a white Sparkle Athletic skirt sitting in my running drawer, and I really wanted to make little man a gingerbread man shirt. For some reason, finding a plain brown youth t-shirt proved to be an impossible task, so we decided he would be an elf instead.

Some felt and stabbed fingers later, with the addition of some festive hats and socks, we had our outfits!

Little man was so excited (he actually loves the shirt and wants to wear it and the socks as part of his regular wardrobe).

My parents met us on race morning – they were excited to see little man run his first 5K, and I think he was excited for the encouragement. The weather was ok – humid, but overcast and relatively cool. We wandered around the staging area. The one mile fun run and 10K race were scheduled to start before the 5K so we had time to meet up with some of our friends and visit some of the vendors and sponsors.

And pose for pictures 🙂 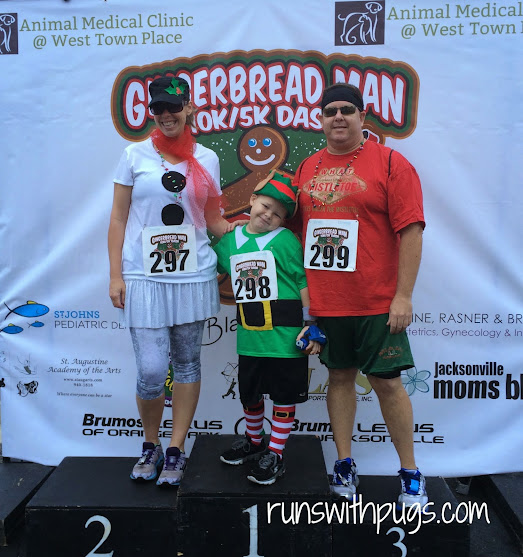 After a quick run to the portapotty, we lined up for the start of our race. Little man was incredibly excited – he wanted to wear my new Garmin, so I set up intervals of 1:00/1:00, thinking that would work perfectly for him. He is a big fan of sprinting and then walking – rudimentary intervals, if you will. When we lined up at the start, I reminded him that he could run a little ahead but that I needed him to stay in my eyesight – it was crowded and the course was open to cars on one side.

He did great for the first mile. In his excitement, he probably did go out a bit too fast, but he seemed to really like being around the people and I know for a fact that he loved seeing all the dogs on the course (I did, too). He loved the idea of the water stop, and we took a little break while he got a drink. We also had a handheld for him, just in case he needed something extra. Which he did.

Miles two and three were tough. He was a trooper though, and we were able to keep him going to the turnaround of the out and back course. After that, we worked on making it fun. The Garmin was annoying him so we turned it off, and I tried the idea of “let’s run for five light posts and then walk for five.” That kept his mind on counting and hitting a visual goal rather than on the run itself. He told me he didn’t like 5Ks and the he didn’t want to do another one until he is an adult. I told him that was fine, but that he was doing great and he was going to be so happy and proud when he crossed the finish line.

As we got closer to the end, we saw a few runners who had completed the race walking back with their medals. Several of them called out encouragement to him and told him that his medal was waiting for him in just a little while. That perked him up and he rallied like a champ.

Nothing beats a strong finish.

Well, maybe a themed medal and a gingerbread cookie.

We couldn’t have been more proud of this little elf. He pushed, even when he wanted to quit, and now has his very first 5K under his belt. Even though he said he didn’t love it, l have a feeling he is going to want another go at it. And we will be right there with him if he does.

Afterwards, we hopped in line for some of the post-race refreshments from Tropical Smoothie, Edible Arrangements and a few other local places, but we were pretty hungry and decided to just go get a full breakfast at the restaurant in the adjacent hotel.

It was a fabulous morning. The race was the perfect size and well organized, with lots of pre- and post- festivities. The volunteers were friendly and sweet, and of course, made the race complete. I wasn’t entirely comfortable with the open-to-traffic course, but there really wasn’t a way around it, so we just made the best of it.

The medals were adorable and the distribution of the gingerbread cookie to finishers was a tasty touch.

I think this face says it all! 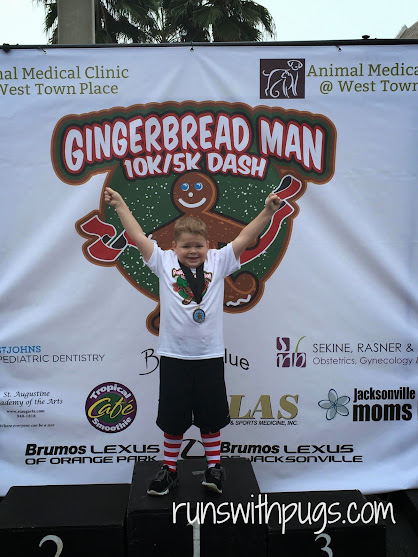 Did you run a holiday themed race this winter?

Do you ever race as a family?