I was stoked for the Gate River Run 15K. 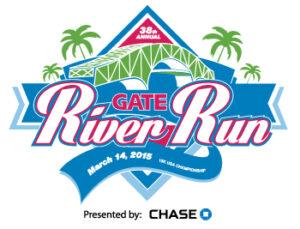 After last year’s misery, I had some unfinished business with this hometown race, and I was ready to take it on.

Let’s start with the expo.

On Friday, Mr PugRunner and I headed to pick up our packets and do some shopping at the Expo.

I was so excited to get to meet Anne, from Candy Crazed Run. We have become blog friends over the past few years, and it was great to finally put a face to an internet presence. We didn’t get to hang out for more than a few minutes, but I am sure our paths will cross again.

Incidentally, we bumped into a lot of friends at the Expo. Also incidentally, I had to buy us matching Green Monster shirts.

We checked into the Omni Jacksonville and started to make plans for dinner. The hotel restaurant was offering a few race specials for dinner, but we decided to stretch our legs with a walk across the street to Chicago Pizza at the Landing. We each had a glass of wine and we split a Chicago-style pizza.

We also checked out one of the two bridges that would be on the course the next day. So beautiful when you’re admiring from afar. 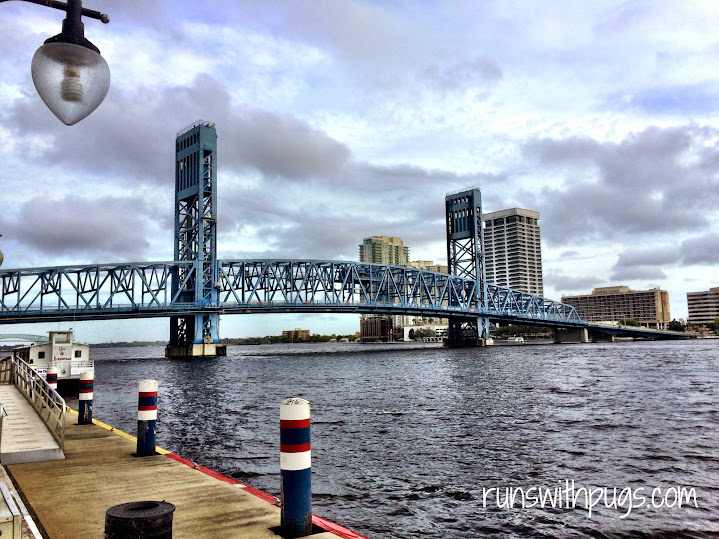 Back in the room, we got our race outfits and supplies ready and then kicked back with Taken 3, rented via the in-room cinema. 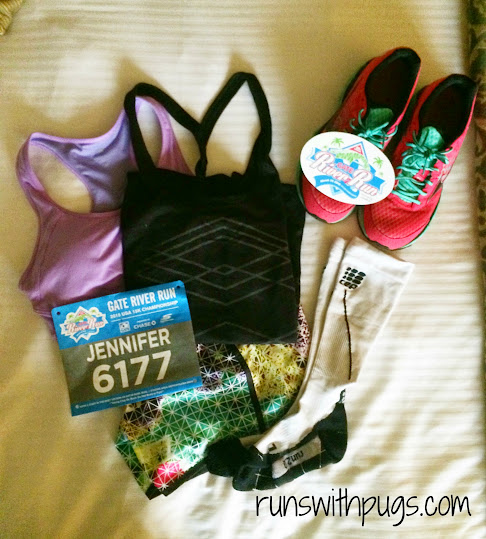 I was asleep minutes after the movie ended.

Even though we were only a few miles from the start line, I wanted to get up and over to the staging area to make sure we were able to get a parking spot. I’m a nut about parking.

We took our breakfast with us in the car and had a bit of a picnic as the sun rose.

Of course, I had to take a few little potty breaks, but what else is new?

As we waited for the 8:30 gun time, we met up with friends and got ourselves warmed up and situated.

After a few more bathroom runs, Mr PugRunner and I headed into our corral, where we finally met up with Kristin.

The day was already warming up quite a bit. An 8:30 start is nice for getting some extra sleep, but it can also be brutal in Florida. Those cooler minutes before sunrise absolutely count, and it would have been nice to have been running already.

Finally, it was time, and we started out. 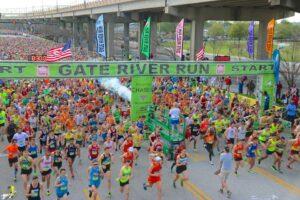 There are about 15,000 athletes in the Gate River Run 15K. Even with staggered starts for waves and corrals, it gets crowded. Really crowded.

Kristin and I got separated pretty soon after the start line, and I fell in with a pack of runners as we made our way through downtown Jacksonville and to the first of two bridges: Main Street.

Even with the metal grating and the wall-to-wall people, I like this bridge. It offers a beautiful view of the city and really isn’t too awful of a challenge, especially on fresh legs. 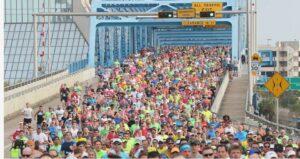 As we turned into the San Marco area, I was struggling with my pace. I was having a really hard time getting around other runners and the constant speeding up and holding back was starting to wear on me a bit. This, combined with the humidity and heat was starting to tire me out a bit more than I was hoping.

So, I tried to settle in and enjoy. The River Run is known for its crowd support, and I wanted to look around and take it all in: the cheering crowds, the bands, the signs… 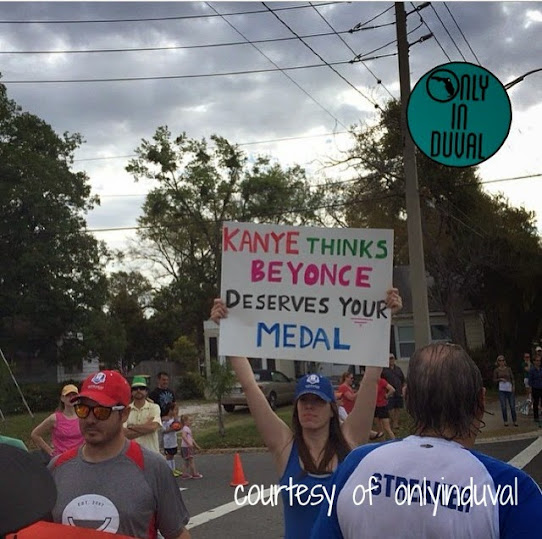 As usual, people were handing out all kinds of things along the route: donut holes, orange slices and cups of beer, to name just a few. Early on, I wasn’t really in the mood for anything, but as the race wore on, I started thinking about the otter pops that would surely be passed out in a few miles.

It was mostly overcast, but the sun did pop out from time time, unfortunately, in the areas where there was the least shade. I kept drinking Gatorade from my bottle, and pushing through. I may have stopped for a sip of mimosa, too. I couldn’t not.

I had a pineapple popsicle, before I got to mile 6, which is just a hard stretch of the run. The crowds diminish here, and the course runs along an overpass, so there’s really nothing scenic to distract from the heat and the sound of shoes slapping pavement.

By the time we reached the last road to the Hart Bridge (aka The Green Monster), I just wanted to be done. I took a salted caramel Gu to try to give myself an extra boost, but I was really looking forward to real food at the finish line.

I scored another otter pop at the base of the aptly named Hart-breaker and started up. To my surprise, Kristin popped up behind me and we kept each other company, and even got pictures at the top.

Finally, it was time for the descent. It’s a long downhill mile to the finish line, but it was so good to have an end in sight.

With a last burst of energy, we were over the finish line.

It wasn’t the race I wanted to have, but I got my PR!

We all reunited back at the car to celebrate! 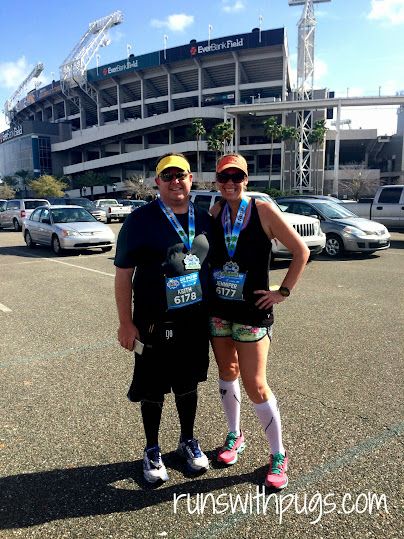 And at long last, I got a nice, cold, refreshing adult beverage. Ahhhh.

We hung out for a little while, and then it was time to check out of the hotel and head to a celebratory lunch at Hurricane’s with everyone. 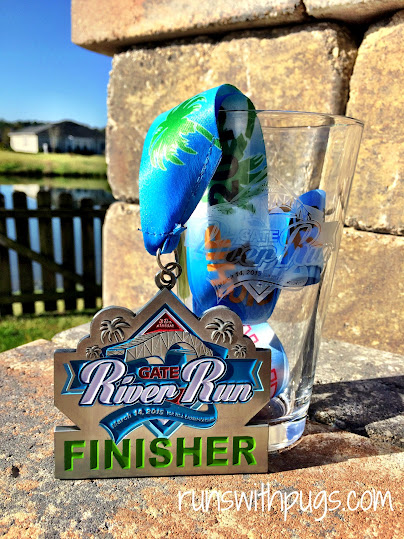 I love this race. It’s hard, with false flats and crowds and tight corners, but it’s home. The volunteers and spectators are so amazing, and make every step part of a wonderful experience.

I’m excited for next year!

Do you ever get to meet blog friends at events?