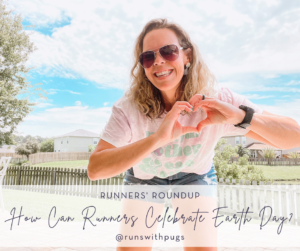 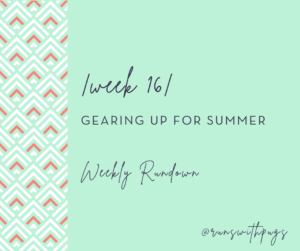 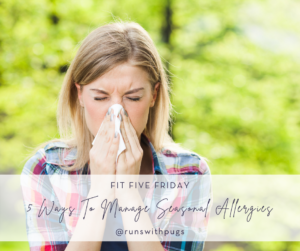 Another week has come and gone, and I can’t believe how much I was able to accomplish. My lovely coaches gave me a wee little bit of a break this week, too: instead of two days of body circuit, they only assigned me one, and I was able to swap out that for something just a little more fun.

I needed this run. Pink Up the Pace was fun, but hard, and it was nice to come back the very next day, feeling strong and in charge. 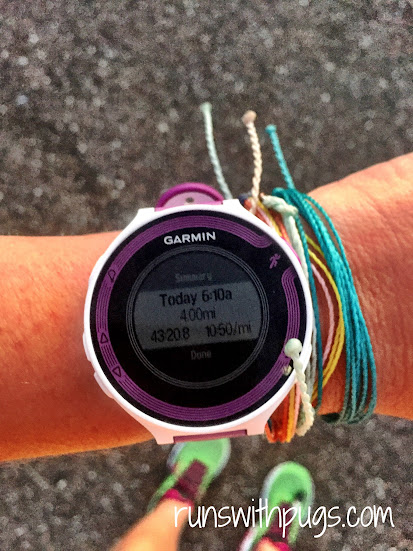 In fact, the only negative was that I had to go out even earlier than normal so that Mr PugRunner could fit in his run as well. It was nice to cross paths with him, though.

It was an easy day. Mr PugRunner and Papa Bear had plans in Orlando, and so little man and I hung out for a bit until Nana came over. I had dinner plans with a friend, and so Nana was kind enough to stay with little man so I could go.

I didn’t have body circuit, but I did have to surprise little man’s teacher with a pumpkin spice latte, so my morning started pretty early anyway. I also had to go in to work for a few hours: we are getting into busy season!

While I was gone, my parents came over and my mom did me a huge favor by sewing some felt pieces on to shirts for our upcoming race. I was so overwhelmed and she took a very big job off my plate with her help.

I got this workout done, a little out of order, but done all the same. I had to do my speed intervals at home, before joining up with my group run immediately after. It all worked out just fine.

After dinner, it was time to pack our bags. Wednesday was going to be a big and exciting day.

October 7 is National Walk To School Day, and we were happy to be a part of it. Our school had a huge group this year, and we all walked together from a central meeting place to the school. A breakfast of bagels and fruit was provided for participating parents and students, and we all enjoyed before walking little man to class, wishing him luck on his spelling test and giving big hugs and kisses goodbye. We hurried home, finished collecting our things, tossed the bags in the car and hit the road.

We were off to a wedding in Islamorada!

It took about six hours to make it to our hotel.

We checked in at the Cheeca Lodge & Spa and had just enough time to shower and change before heading to the welcome dinner at a waterfront restaurant.

It was a lovely evening, with lots of friends. When dinner ended, we opted to return to our hotel to enjoy the view and get some sleep. We were exhausted and we had another early wakeup call on the wedding day.

The bride and groom had invited the guests to a wedding day 5K at their hotel. The sun was just coming up

as we went to appointed meeting spot. The groom gave his race day instructions for the out and back course, and we were off. Mr PugRunner was having some knee pain, so I went on ahead.

It was a good run, even if it was incredibly humid.

We walked over to Bob’s Bunz to refuel,

and then went back to our hotel. I was supposed to spend some time in the hotel gym on Friday, but one of the amenities was complimentary stand up paddle boarding, so some of us decided to take advantage of that, instead.

After lunch and a nap, it was time for J & M’s  beautiful wedding and reception!

Look at us: all cleaned up and out of active wear!

Everything was so lovely and every moment was perfect. We were so honored to be a part of their special day.

Even though Mr PugRunner begged me not to, I set the alarm. No way was I missing the sunrise on our last morning in Islamorada!

We spent most of the day into the car. I did request that we drive by my alma mater, University of Miami, to just take a quick look, and so we did, stopping at our favorite fan store, All Canes, to pick up some gear for the whole family.

We also got an early lunch at The Big Cheese, one of the best pizza places in Miami (heck, in Florida).

It was every bit as delicious as I remember.

After deciding he didn’t like triathlons, little man had asked me about doing the mile fun run at The Great Candy Run. I’m always game for a new adventure, so I signed him up. I will post a recap, but we had the best time together!

I was pretty much done for the rest of the day. All the fresh ocean air, driving, and early mornings were starting to get to me.

Mr PugRunner ended up taking little man out to dinner and for dessert and I lounged around, before turning in a little after 8:00 so I could be up for ten miles on Sunday.

As you can imagine, it was great to have all of Saturday afternoon and evening to chill. After all the fun and friends and running around, I was ready for it.

How do you stay active on vacation? Do you head to the hotel gym or try something more creative?