the streets of philadelphia

For some reason, Philadelphia was never high on my list of cities to visit. I went once for a field trip, maybe in middle school. I remember seeing the Liberty Bell, and maybe Independence Hall. It just wasn’t on my radar to pursue further.

However, when I was looking at the Rock ‘n’ Roll race series calendar, and realized I had a running friend in Philly, I thought it might be cool to give the City of Brotherly Love a chance. 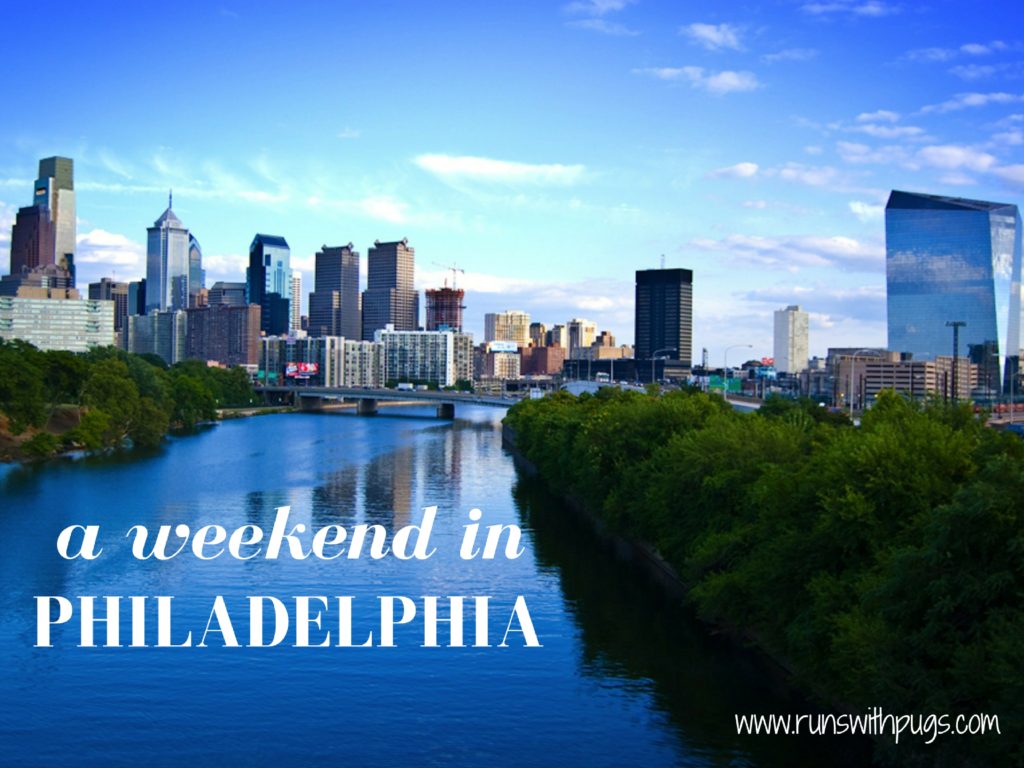 S seemed pretty excited to have me and things fell into place: from an incredibly inexpensive flight from a local airport to no other commitments that weekend – everything just worked out.

I flew in on a Friday morning. I’ve mentioned that I don’t love flying (can someone please invent a way to beam people to their destination?), and I was a little more nervous because I was taking a new (to me) airline from a new airport. Which was really kind of just a hangar. And that was it.

(In all seriousness, once I got over the fact that there was no jetway, Frontier was wonderful).

The view helped distract me from the trip.

I arrived in Philly on time and raring to go.

First order of business was lunch. We enjoyed burgers and whiskey cocktails at JJ Bootleggers. The weather was beautiful and we took advantage of the breeze near the open doors.

With full bellies, it was time to get down to business. S had secured tickets for the double decker sightseeing bus, which we agreed would be a  great way to get an overview of the city.

I was all for it and we rode through the streets, listening to the tour guide and taking in the gorgeous views. Personally, I was loving the break in the temperature and humidity. It was like fall for real.

I fell right in love with the architecture and the vibe. I couldn’t get enough.

And look at me, all needing a sweater!

We made a quick stop at S’ house (which was also incredible), and then we were right back out for a waterfront festival, complete with food trucks and craft beer and cider.

We decided to skip dinner and pick up traditional cheese steaks for later, but we did want to sit and admire the view.

PS – those cheesesteaks, taken out from a little hole in the wall place, were divine.

Even though we are both early risers, I had to beg for mercy on a crazy early alarm. There was a lot of sightseeing to be done, and I was anxious to get it all in, but I also needed just a wee bit of sleep.

Our first stop on Saturday morning was the Liberty Bell. When in Philly, right?

The venue was a lot different than I remember it – I seem to recall it being outside and part of a walk up display, but now it is housed in an building, surrounded by panels detailing all the historical facts about the bell.

We were able to walk right through the line and admire the artifact. And then it was time to turn our thoughts to breakfast.

S picked a place with a gorgeous outdoor garden seating area: Wedge + Fig. Since the weather was still cool and crisp, it was perfect.

I really tried to pace myself for the day, but it was tough. We started with a cheese plate

And I followed that with the Baked French Toast Casserole.

S also ordered some gluten-free peanut butter cookies to go, and they baked them for her on the spot. Amazing. Thus fortified, we headed out to explore on foot. We walked and wandered, wandered and walked. We totally forgot that we had (complimentary) tickets to see Independence Hall, but I was so busy absorbing all the sights and sounds that I didn’t mind too much.

We needed to pick up our race packets, and so we hit up the Reading Terminal Market, across from the convention center.

The sight of all the wares for sale was beyond overwhelming. I wished I was staying longer so I could browse and purchase some of the yummy looking fresh ingredients. The previous night’s bus tour guide had instructed us to pick up black and white cookies, but by the time we made it to the specified vendor, they were all sold out. Boo.

We finally emerged from the hustle and bustle and crossed the street to the convention center for the Rock ‘n’ Roll Philadelphia Half Marathon Expo. Whoo hoo!

We must have arrived right on time, because there weren’t any lines whatsoever, and we were able to move through packet pickup and the merchandise quickly.

The downside to our plan was that we lost track of time. By this point, it was too late to have a real lunch and still be able to have a solid dinner and get to bed at a reasonable hour. What are two gals to do?

Apparently, Philadelphia is home to one of the best gelato shops in the world (according to National Geographic, which is a pretty reliable source): Capogiro Gelato. I love ice cream more than any food, and I’ll obviously have to go back to Italy to be able to do a comparison taste test, but this was a perfect mid afternoon snack.

I got three scoops: pistachio, chocolate peanut butter and hazelnut. Because nuts are full of protein, and I was being smart about fueling for the next day’s half marathon. Or so I told myself.

While were downtown, we also checked into our hotel, the Logan, and dropped off our bags. 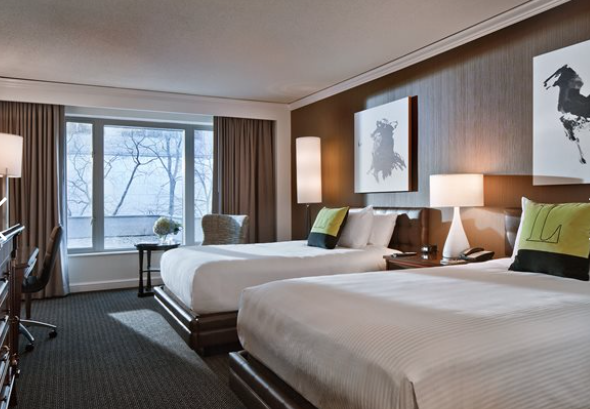 courtesy of The Logan Hotel.

We would be a healthy walk from the start and finish lines of race, which was nice so we didn’t have to contend with race morning traffic and parking. The hotel was gorgeous, and I would very much like to spend more time there on a future trip.

There was no time for resting, though! We still had to collect our overnight supplies and race gear from S’ house, and think about dinner. Usually, I like pasta before a big race, but S was singing the praises of Loco Pez. I love tacos, and figured I could supplement with a bowl of rice to get my carbs in. It was a good call. We shared chips and salsa, and I added two (plain, basic) street tacos to my rice. I didn’t want to upset my tummy by being too adventurous, but next time, I would love to try some of the specials (that night, they were serving octopus and duck based tacos).

We took an Uber back to our hotel, and I was absolutely in love with the skyline.

By the time we settled into bed with a glass of wine and college football, we had covered over 17,000 steps (almost seven miles) of wandering about the city! On top of almost 19,000 steps (eight miles) on Friday, I’m not sure we did a great job of resting our legs for the big day. Whoops.

You can read all about my Rock ‘n’ Roll Philadelphia Half Marathon experience in my race recap.

Needless to say, Sunday was bittersweet. S’ husband joined us at the finish line and after we showered, he hung with us for the rest of the day. We had brunch at a rooftop bar and grill (I was craving veggies, so I ordered a salad), and the rest of the day was spent relaxing before our big celebratory dinner at Fogo de Chao.

While I am not a huge meat lover, I had never experienced a Brazilian steakhouse and was game to try. Diners are seated and encouraged to sample the Market Table first. It’s a huge assortment of warm and cold offerings: fruits, vegetables, cheeses, antipastos, and all sorts of delicious things. Delicious puffs of bread (pao de queijo) are served at the table, as well as family style dishes of garlic mashed potatoes, carmelized bananas and polenta. The showstopper is the beef: servers circulate throughout the room, offering different cuts of beef, carved directly from what can only be called a sword. They only stop when you indicated you’ve had enough. Oh, there are chicken and sausage people, too, but they seemed to get turned away a lot. I was stuffed (and obviously too preoccupied by the swords to take pictures) by the time we left. As a once in a while treat, I would go again.

My flight out of Philadelphia was ridiculously early, so after a glass of wine, I said my goodbyes to the rest of S’ family and hit the hay. We are already talking about the next time I can visit, hopefully with Mr PugRunner and little man.

Have you ever visited Philadelphia?

Ever been to a Brazilian Steakhouse?

One Response to the streets of philadelphia