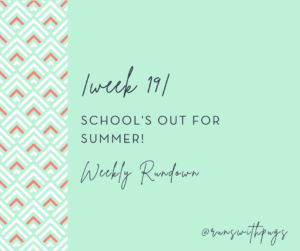 We started the week with Father’s Day and ended with an absolute slew of parties. In between, tons and tons of fun! Oh, and there was definitely some working out on the docket.

For Father’s Day, we left the shape of the day entirely up to Mr PugRunner. He loathes planning and feeling pressured to go places, so we decided to have breakfast and drinks at home. He got a Bloody Mary and I made myself a delicious “frose-mosa” with Frose sorbet and prosecco. Highly recommend.

He first wanted to go to the beach, but then changed his mind to the pool, so we headed there for a few hours, until the thunder started.

In lieu of a big dinner, he asked if we could all go to see The Incredibles 2 with popcorn and movie snacks, and then out for ice cream. Done and done. And by the way, it was a fabulous movie, even for grown ups.

We were up almost earlier than on a run day: two other families were joining little man and me for a trip to Ichetucknee Springs. Florida is known for its amazing natural springs, and so many of them are open for swimming, snorkeling, tubing, fishing and canoeing/kayaking. Ichetucknee is notorious for its low capacity and early closing (once the park hits 720 people, it is closed for the day), so the goal is to be there right when it opens and secure a spot.

The ten of us arrived right on time, got organized, and then took the shuttle to the top of the river for a three hour float to the bottom.

The water is always cold (72-74 degrees), but so clear and beautiful. The kids, for the most part, floated face down with the snorkel masks, looking at fish There were tons of turtles and birds, too.

After a picnic lunch, we drove to another point of the park and spent the afternoon at one of the swimming holes Again, it was freezing, but so stunningly beautiful. I can’t wait for our next Springs adventure!

Needless to say, after a two hour drive back, we were ready to shower, eat and sleep!

We were supposed to run, but when that alarm went off, I was also happy to get some more sleep. My arms were sore from hanging in the inner tube for a few hours in cold water, and all the fresh air and sun and left me pretty exhausted.

That being said, we did have a beach playdate, and we rallied enough to make that happen, even though we were late.

The kids had fun exploring, and we got to see plenty of dolphins and some sea turtle nests.

Right after lunch, I got stung by ANOTHER yellow fly. I couldn’t believe it. We packed up and went home, but not before grabbing ice cream to make me feel better.

I didn’t want to, but I felt really off after skipping Tuesday’s run, so off I went. It wasn’t a great run, but it wasn’t terrible either, and I felt back on track.

I was looking forward to a down day, but little man had plans with a friend down the street. They ended up playing outside and then selling lemonade and cookies in the neighborhood. It’s so cute to see them being so entrepreneurial

That evening, he had his first karate class at his new belt level. He came home, so excited to show of his moves!

Since my running schedule was so far behind this week, I wanted to get caught up Ideally, I planned to run four days straight, but that would not come to pass. Instead, I scored another four miles.

On the brighter side, Mr PugRunner had taken a day off! He has been so busy and distracted with work, and we have really not seen much of him this summer. It was awesome to get the day with him.

We celebrated with a new donut shop,

and then tried a beach we don’t often frequent. Once again, there were tons of dolphins and little man got in some great boogie boarding. Me? I stepped on a crab and got a nice pinch on the side of my foot. Boo.

We had pizza for lunch and then went out for some errands. We had a ton of birthday parties for the weekend and needed to stock up on presents!

Mr PugRunner dropped us off at the house so he could run one last errand, and no sooner had he left than a huge storm broke out. The wind knocked down patio chairs, and we lost power for a few hours! It was really freaky and I was very grateful when the power came back and things quieted down. Yikes.

Like I said. Running for four days straight wasn’t actually in the cards.

Today was my mom’s birthday. My mom is a huge carnivore, and so we decided to take her and my stepdad to a Brazilian steakhouse for a late lunch. We also had to celebrate a belated Father’s Day since the had both been out of town and Papa Bear missed the day with us.

Lunch was totally yummy, although it’s always way more food than I can eat. Next time, I’m just going the Market Table route for all the salads, charcuterie and fruits and veggies. I love some of the meat selections but I don’t need to have it all the time.

When we got home, I was perfectly content to nap it off. We didn’t really eat for the rest of the day, which didn’t work out so well for my Saturday long run.

While I was happy to log the seven miles in the morning, I was dehydrated, underfueled and I ended up feeling awful. It was my own fault and I will do better in the future. This weather has been no joke and I need to take it more seriously.

And as if that wasn’t enough, that evening, we headed to a community a bit up the street for a Star Party: one of the local astronomy clubs had brought out their members and their telescopes and as night fell, they shared their passion and knowledge with the guts. We all got amazing views of the moon, Vega, Venus and Jupiter plus three of its moons! It was incredible!

We were using it as a Cub Scout event, but little man loved it so much that we will be following this particular club and will attempt to attend more of their events. Unfortunately, I had to call an end to the fun because I was bone-tired. I hate being the fun burglar, but I couldn’t stay up any longer.

Even though my running was off to a slow start, I definitely made up for it by the end of the week. I’m not super discouraged, simply because we were so active on the other days, so I’m sure I more than made up for it.

Have you ever attended a star party?