When we made plans to spend our 4th of July week in Southport, NC, I immediately hopped online to find a race in the area. Even though we weren’t going to be there over a weekend, having Independence Day in the middle of the week ensured that someone in the North Carolina area would be hosting a celebratory run.

My search led me to two events: a small, low-key Turtle Trot on Bald Head Island on July 3, and a larger, themed 5k in Myrtle Beach on July 4. For a hot minute, I entertained the thought of doing both, but the 4th of July run would have left me unable to attend the Southport parade festivities with the family, so I tabled South Carolina until another time.

The BHIC Turtle Trot 5K it was!

It’s currently turtle nesting season along the Southeastern coast, so island and beach towns work hard at raising awareness for the cause. Sea turtles, using the moonlight to navigate, make their way up the beach in the middle of the night, lay their eggs in the dunes, and crawl back to sea. Scientists and local conservations groups mark the tracks and document the nests, and wait about 50 days for the babies to hatch. The babies make a mad dash for the water, trying to avoid seagulls and other predators, and hopefully find their way to the safety of the waves.

During this time, it’s extremely important to leave the nests undisturbed (unless with a biologist or park ranger, who will sometimes gently unearth the eggs to record data, and is usually more than happy to show the finds to passers-by), and it’s also crucial to keep light pollution to a bare minimum on the beach at night. The mothers rely on the moonlight and  light from streetlamps, houses, cars, or even flashlights, can confuse them and lead to false nests.

I have been very fortunate to see turtle tracks to new nests, eggs in the nest, and baby tracks, although I’ve yet to see the new hatchlings make their way back to the sea. Maybe one day. It’s just an incredible thing to witness.

The Turtle Trot 5K is actually a regular, weekday event. It’s probably a huge hit with guests of the island, and I think it’s fairly cool that it’s available to so many people. My brother-in-law volunteered to run with me, so we both registered.

This is a slightly more expensive 5K than I would normally run: $50 for off-islanders. The fee includes a bib, shirt, refreshments, and the $22 round trip ferry ticket and tram ride to the island and then venue. That being said, I know the funds go to turtles and conservation, so it’s money fairly well spent.

We received email race instructions prior to the morning of and were directed to take the 8:00 AM ferry. We would be greeted by a member of the Bald Head Island Conservancy, who would provide our tickets and escort us to transportation once we arrived on the island.

We were loaded onto a tram with other runners and walkers and took a 15 minute drive to the Conservancy. I confess that I was a little queasy from the boat ride and the bumpy roads – sometimes I’m a little more about the destination than the journey – and very grateful to reach the venue.

There was a great little clearing where everything was set up: I loved how the shirts and bibs were rolled up together, safety pins already attached to the bibs. It was a really nice touch and we were able to just snag our packets. There wasn’t an official gear check, but we were told that we could leave our belongings inside the conservancy, with the welcome desk. So nice.

We milled around, enjoying a snack and the beautiful scenery. Usually, by this point, I have run, showered and eaten, so I was doing my best to stay fueled. 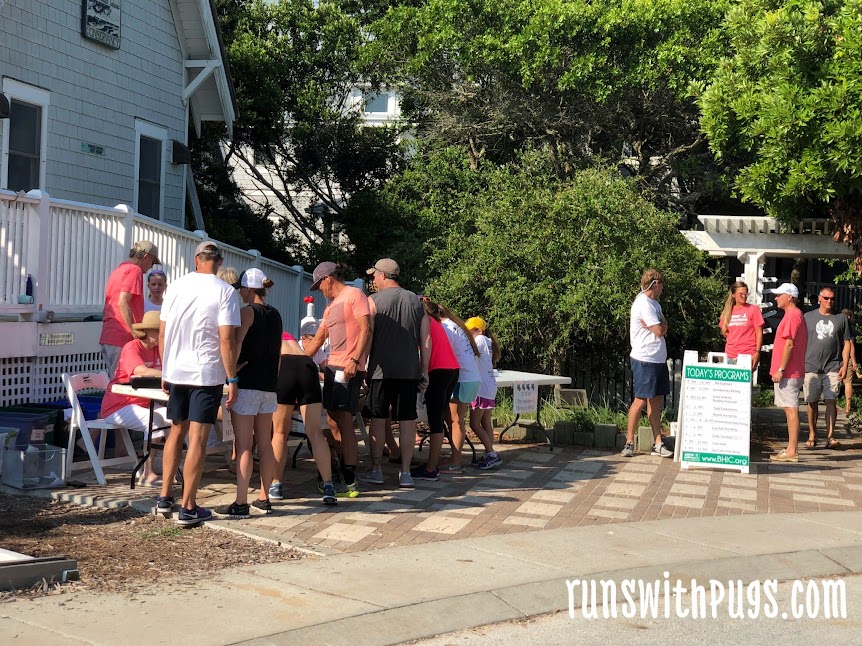 This race had a bit of a later start: 8:30 onsite registration and 9:30 gun time. I was hoping that the beach island air would make it more manageable, but there was no getting around the fact that it was hot hot hot.

At about 9:20, the race director made his speech. He informed us that unless it was our first 5K ever, it was NOT going to be a PR race. The course involved some paved roads, but also sand and hills, and because of the weather, the advice was to take it easy, hydrate at the three water stations and just enjoy the island. 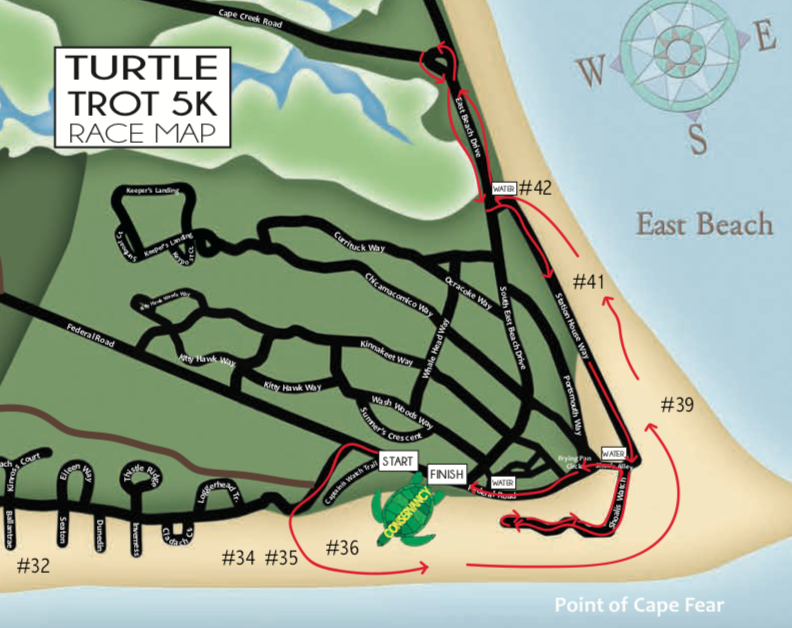 I didn’t need to be told twice.. I hadn’t really paid much attention to the course map, and that was probably for the best. Had I known what was to come, I might have reconsidered.

At 9:30, we set out. My brother-in-law wanted to stay with me, even though I encouraged him to go on ahead. He has a much faster pace than me and with the heat, humidity, unpacked sand and hills (which he is used to as he lives and trains in the DC area), I hated holding him back. He’s a great sport though and stuck it out, even when I started intervals at about 3/4 miles in.

We left the conservancy, ran down the street, over a bridge (read hill), and then looped to a beach entrance. This was rough. The sand was soft and dry, and there really weren’t any even, packed sections. The tide was high, too, so we spent the run looking for the flattest, most stable sections and trying to first avoid the creeping waves, and then staying clear of the tide pool that had formed after the turn at the Point of Cape Fear.  This section of the race was about a mile long, and while the view was gorgeous, I wasn’t sorry when we got back to the road.

The next two miles would through shaded streets past lovely rental homes. The tree cover cut the temperatures significantly, which was nice.

And then we reached the last half mile of the race. It was supposed to be a  u-turn, which would wind around and take us back to the conservancy. However, the actual turn was literally 1/4 mile straight up a crazy-steep hill. The view from the top? Beautiful! But gah, my endurance was shot!

K was absolutely gracious – he would run up the hills and wait for me to catch up, which was fine. I am always good for running downhill, so it balanced eventually. Finally, we crossed the finish line and I crossed off that next state.

The race had set out water, bananas and bagels,

but the snack shack was also open and a scoop of Italian Ice sounded like a much better choice.

I was probably delirious with dehydration and heat stroke, but it was pretty much the best Italian Ice I’ve ever had.

After the awards presentation (hats were presented to the winner of each of five age groups), we realized we needed a ride back to the ferry. One of the conservancy employees graciously offered to take us in her golf cart, and even treated us to the “beach” way, to give us the best views of the island along the drive.

The breeze of the ride was a great way to cool down a bit.

Really, the biggest hiccup of the day was that the next ferry didn’t until 12:30, so we had some time to wander. Had I realized that (and I had known we could have “checked” some gear), I would have brought  backpack with some wipes and snacks, so we could have maybe checked out the beach, looked for turtles nests and taken in some more of the sights. We did end up climbing the lighthouse and getting lunch, but I was desperate for a shower at that point and couldn’t wait to board the ferry back to the house.

I love that the Turtle Trot 5K is a frequent thing so visitors can take advantage no matter when they come to the island. It’s small (this particular one was under 100 people) and low key (no timing chip, no medals, no photos, etc), but definitely for a good cause. I might do it again if convenient, but would also be open to other options in the area, just because of the cost.

Have you ever had to take a ferry to a race?

Are you willing to spend more on a race if it’s for a good cause?