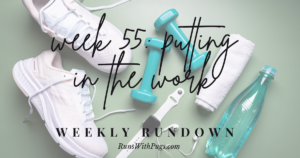 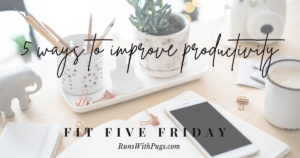 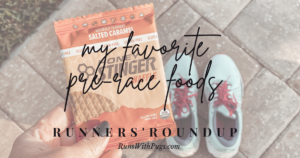 It’s maybe the ninth week of pandemic times, and I have lost all track of everything. Our days are so turned around upside down and I feel like we are in some bizarro limbo world. I have lost all sense of time, dates, and urgency. It’s probably a good thing for me, because I can be a little rigid, but it would be nice to have some normalcy again.

Tomorrow, Florida enters the end of its Phase I opening. That will give us gyms, salons, and greater capacity at restaurants. Also, professional sports are invited to start training again. I’m hopeful that things go well, but no one knows what to expect.

I ended up taking a complete rest day. The weather was awful, and some of the dads had planned a really sweet, socially distant Mother’s Day brunch for the moms in our culdesac. We got sprinkled on a few times, but we also had shots so it was ok.

My big request for the day was a photo with little man and the pugs. Hufflepuff the hedgehog was not interested in joining us.

Another Monday. Is anyone else feeling like groundhog day? It’s just wash, rinse, repeat. I got out for an extra nice walk to make up for Sunday.

Little man has been jonesing to make “pancake cereal” (thank you, TikTok), so I gave the ok. Our mornings have been a little chaotic with the puppy and trying to stay on top of everything, but he was so happy to give this a try.

He liked it, but said he preferred making (and eating) regular sized pancakes. So now we know.

I was super nervous about starting Week 4 of Couch to 5K. On Monday, I stepped in a hole in the front yard with my injured foot. I didn’t hurt myself, but I also wasn’t feeling great, either. I decided to just take my time and not worry.

It ended up going fine. Not great, but fine.

I was glad for that, and also very encouraged.

After a nice play session with the sweet puppy, I went out for my walk.

And then it was time for Luna’s first vet appointment. Our (amazing) vet is still doing curbside so we weren’t with her for her first exam, but they got a photo of her for me. They rock like that. Official diagnosis? Pawfect. Obviously.

We got home just in time to hear some of little man’s live school conferences. It seems that this was the last week of learning and graded assignments. This upcoming week will be completing anything outstanding and retaking any tests to bump up grades, if they so choose. It’s so sad the year is ending on this note.

Our local theater set themselves up as a drive-in establishment, so I suggested the boys have a night out while I stayed home with Luna. They got dinner and then parked for a showing of Sonic the Hedgehog.

They played the movie on the exterior wall of the theater, with an early, family movie and a later “mature” selection. Popcorn, candy and bottled drinks are available for purchase and it seems like a really solid idea for a night out.

We all slept just a wee bit later after staying up til after 11 the night before (think 6AM). I felt really good a after my run.

A friend of mine dropped off this adorable shirt she is selling, and which I am proud to wear.

And we celebrated Bentley’s “Gotcha Day.” We believe he has to be around 14 – he was about a year when he came to us, and then was with us several months before we moved to this house 13 years ago. He is such a good old man and we spoiled him with pizza crusts to celebrate.

This was the warmest morning we had in a while, and so I struggled with this walk a bit. It’s hard to get out much earlier right now, especially with a new puppy in the house.

Mr. PugRunner’s acupuncturist started taking appointments in a different location (farther away), but his allergies are out of control and we all needed this. The results of just one session after all this time were fairly miraculous.

Luna got a special delivery from her beagle cousin in South Florida: her first Bark Box (it’s a subscription dog box that comes with size-appropriate, themed toys and treats). Her reaction was pretty hilarious, and she spent quite a while attacking Scooby Doo (who is about as big as she is). She also shared her treats with her brother and sister.

It was Food Truck Friday in our neighborhood, so we walked up to the trucks. Fresh BBQ for dinner and even fresher mini donuts for breakfast the next day. Yes, please.

For some bizarre reason, the third day of each Couch to 5K week is always my hardest. I always want to end the week on a triumphant note, but it never feels quite like victory.

We had a super lazy day. It’s hard to really do anything because I’m not ready to leave Luna for very long quite yet. In the afternoon, I had a Zoom call with blogger friends, and that was fabulous.

Since it was a gorgeous night, we set up our projector to show a movie on the garage doors, and a couple of the kids tent-camped in the yard. I love that they are being so creative with ideas for things to do and at least having a little fun.

This week, I need to focus on PT exercises again. I’ve gotten a little lazy with them (they are so boring), and I don’t want to end up reinsured. Boo.

I also need to get my diet in check. With the puppy, I’ve been super lazy about mealtimes, and end up grabbing a bowl of cereal at 3PM, calling it brunch and having done with it. Mr PugRunner didn’t have much of an appetite this week either, so that made it easier to just slack in the kitchen. We meal-planned a bit and have some yummy options for the upcoming week so that should solve the problem.

Coming up this week we have our final school pickup/dropoff. The staff will open all the lockers, clean them out, bag the students’ belongings and we all go pick up that bag. It’s not how locker up should be, but there it is. Little man swears he didn’t leave anything questionable (and I have his PE clothes and lunchbox, so hoping nothing nasty is in there for teachers to find).

We are hoping to also get out on some kind of family excursion this week. Not sure what we can swing, but even if it’s an hour at the beach, it will be good for us.

What’s going on in your world? How is normalcy looking for you?