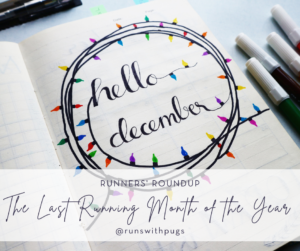 After all this time, we finally ventured out. We have been maintaining a lot of social distance, and being careful so far as unnecessary trips and gatherings, and we were so glad for the break. Especially me, seeing as I had been mostly homebound even before the pandemic began.

Despite the miserable weather, little man and I went out for a nice walk. Did it rain on us? Of course it did. Why wouldn’t it?

And then we settled in for another chill day. Mr PugRunner cooked on our Big Green Egg, and we just watched movies and hung out. After getting soaked, I was in zero mood to do much else.

There was no skipping Monday, and I felt great for this walk. I am still trying to run the rainbow, and wanted to show off the orange flower in my succulents along with my orange tank top.

This was the sort of run where if it could go wrong, it did. Little man joined me on the scooter, but he was not helpful about it. I accidentally hit the wrong button on the Cto5K app and it didn’t record my efforts. Ugh.

I did get to put my new SNAP ring to work for my post-run selfie, though. And, oh yeah. I did run for 28 minutes straight. And Luna got to attack my running socks.

I had a selfie to commemorate this solid walk, but clearly, this is much better than a picture of me.

We had a chill rest of day, packing and prepping the pugs for the sitter. It was off to bed early for a pre-dawn wakeup call.

My only exercise on Thursday was sitting in a car for eight hours en route to our socially distant cabin vacation. We planned this trip with friends sometime last year, and had been watching and waiting to see if it would be a go. Happily it was.

I will share all the fun details later this week, but it was just so good to get away.

Mistakes were made. Huge mistakes.

I (wrongly) assumed that mountain running would be ok. That I could just take my time and it would all work out. What I did not anticipate was an elevation gain of 500 feet in 1.5 miles. I came thisclose to calling for a ride but I stuck it out.

The fun didn’t stop there. While our plan was to spend time with friends and enjoy the amenities of the property were we rented our cabin, I wanted to go to the Mile High Swinging Bridge at Grandfather Mountain. The last time we were here, it was winter and the bridge was closed, but now, it was open to limited visitors, and I really felt I needed to take on the mental challenge.

Little man and I ended up crossing the span of the bridge (Mr PugRunner is afraid of heights), but I couldn’t comfortably scramble to the small summit just beyond. I was so proud for handling the bridge, and so disappointed in what I couldn’t do.

I was so absurdly sore after my run attempt on Friday that I took the day off from planned activity. Much as I hated to bail, I just couldn’t handle it.

That didn’t mean we weren’t active. We checked out a local farmer’s market, visited some of the great fields and activity areas, and paid a visit to an alpaca farm!

In the evening, we hoped to go to a concert at the local amphitheater, but the rain gods were not on our side, so it was back to the cabin for s’mores and wine and a long night of chit chat and mountain life.

While I am so happy to be spending time with some people I love very much in a fairly remote location, this was very hard for me on the fitness side of things. I have been very accepting of current limitations, but the last few days have been a straight up struggle.

Granted, I have zero abilities with elevation, but it’s so hard to admit defeat with hiking and getting around. Little man and his buddies climbed to a cave and I couldn’t join them because while hiking up might have been ok, there is no way I could have gotten down. I was disappointed that I couldn’t get to the summit on Grandfather Mountain, and sad that I have done zero running over the last few days because it’s so steep and high.

Of course, I’ll rally, but it stings.

In other news, I finally read The Hate U Give. It was a book I received at Christmas, but with all the medications from my surgery, I couldn’t focus on written words. I have seen the movie, but the book is even more powerful, and I highly recommend it.

How do you handle physical limitations?