You are here: Home / Uncategorized / tower of terror 10 miler: expo & checking in

So, Friday was the big day. The day we packed up the car with all our things and headed to Orlando for our big race weekend.

The drive was mostly uneventful. We got stuck in a little bit of rush hour traffic, but it wasn’t too horrible, and before long, we were pulling into the Wide World of Sports to hit up the Expo. 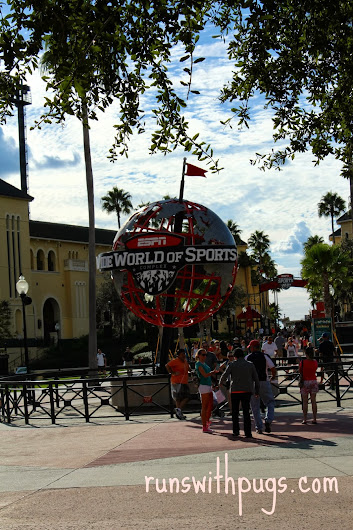 It was my very first race Expo, and it was an incredibly cool experience. The crowds were low, so we were able to pick up our bibs and packages without much wait.

After we had our bags with bibs, race info, and t-shirts, we wandered around a little. I wanted to check out some of the vendors and the official merchandise. Little man was honestly less than interested (it had been a long day at school and he refused to nap in the car, so he was over it), so when our friends, K (A Mom on the Run), A (Mr. AMOTR) and B (their son) showed up, it was a welcome distraction.

Mr AMOTR was planning to run the Tower of Terror 10 Miler, while B was going to run the 200 meter Kids’ Run with little man, so they went to collect their bibs and race goodies, while Mr PugRunner got little man a snack and K and I went to sign up for racer tracking. We got to catch a little bit of Jeff Galloway’s presentation (he was talking about running in the heat and humidity and how to stay safe)

and then Mr PugRunner and I posed in front of the infamous Tower of Terror elevator. Ooooh. Spooky.

I picked up a couple of little things at the Expo (an awesome Raw Threads tank for after the race and a little gift), and then we decided to get dinner and check into our hotel. Mr PugRunner had a 7:30 start time for the Happy Haunted 5K Trail Run, so we wanted to eat and get to sleep.

Mr AMOTR selected Giordano’s for the last big meal. We were thrilled –  we rarely get to enjoy Chicago-style pizza. He texted us the address and we drove off to meet up. It took maybe 10 minutes to arrive, and there was no wait. We requested a table for six and texted K that we had arrived. She responded that they were sitting to the right. The restaurant was nearly empty, but I went to the area by the right of the door and saw exactly no one. She then texted that A was by the hostess stand, looking for us. Which was bizarre, since there was no one at the hostess stand.

I asked our server if there was more than one location of the restaurant, and he said that yes, there were three. We were definitely at the correct address as it had been texted to us, but… there was no sign of anyone else.

Turns out, we were at two different establishments. How that happened, I will never know. It was so sad and so funny all at once, but there wasn’t much we could do. We were all absolutely starving so we decided to stay put, eat and regroup at the hotel.

We texted them a photo of us at the table so they could prop up their phone and feel like we were really there. They returned the favor. I couldn’t stop laughing every time I thought about the absurdity of it.

Mr PugRunner and I split a chopped salad and a small deep-dish. I could only eat one piece, but I wish I could have managed more. We headed to the adjacent Winn-Dixie to pick up some water and snacks, and then hopped in the car to find our hotel. (Please note, it is entirely possible that we went to the wrong hotel as well, but the good news was we were only about a mile from the correct one, so it all ended well).

K had stayed at this Holiday Inn Resort last year and loved it. It’s not on property, but it’s very close to Downtown Disney, so not at all a bad drive. Prices were amazing. We were in a regular room with two full beds for less than $100 a night. The AMOTR family had a suite for about $120.  The great feature was that the suites had a king-sized bed and then a section of the room was partitioned off with dropped walls and filled with a desk and two sets of bunk beds. Score. The plan was that little man would stay with B in the suite on the night we were at the race, with Mr AMOTR’s cousin doing babysitting duty while they slept. It was a brilliant idea.

Even more brilliant was K and her husband offering to let little man stay on Friday night, too. For one, I’m not sure exactly how they were going to pry him out after he saw the bunk bed area. For two, Mr PugRunner and I had to be up and out by 5;30 AM in order to get to his race on time, but little man and B had a 9:30 AM start. K said that he would be able to get a little more sleep and they would happily bring both boys over when it was time for their race.

Eternally grateful, we got him showered and in his PJs, packed up his running clothes and his toothbrush and brought him across the hall for his sleepover. The boys explored the bunks, watched some shows on the iPad and within 3 minutes, were asleep.

Honestly, it took me hours to fall asleep that night. The hotel was great, and we were having a wonderful time, but I just couldn’t doze off. I was so excited and keyed up for all the events to come, I guess.

Up next? The Happy Haunted 5K Trail Run, runDisney Kids’ Race, and how we spent the rest of Saturday leading up to the main event! I hope you’ll join us!

When you travel to races, do you ever go with other families?