It was definitely bittersweet to wake up that last day and know that we would be heading home in a few hours. Of course, we missed little man and the pugs, but we had been having loads of fun.

Much as I would have loved to go back to B Matthews Eatery for breakfast, Mr PugRunner needed to eat asap, so we thought we would check out the Westin’s restaurant, Aqua Star. They offered a buffet, as well as an a la carte menu. We both went for the a la carte – Mr PugRunner spotted eggs benedict, and I felt like the granola blueberry pancakes.

The plan was just to wander and explore. We spent some time perusing the River Street Market Place, 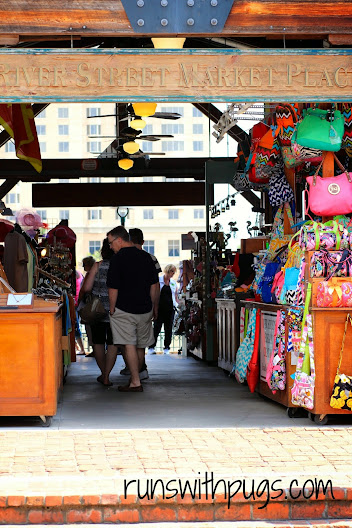 which is comprised of covered vendor stalls, set up along the river. There were some neat finds, from local artists and salespeople. Some things were super touristy, while others (like jewelry crafted out of Civil War ammunition) were kind of unique. We didn’t see anything that we liked enough to carry along with us, though.

We had been through City Market a few times already, but this time, we browsed through all the little shops. 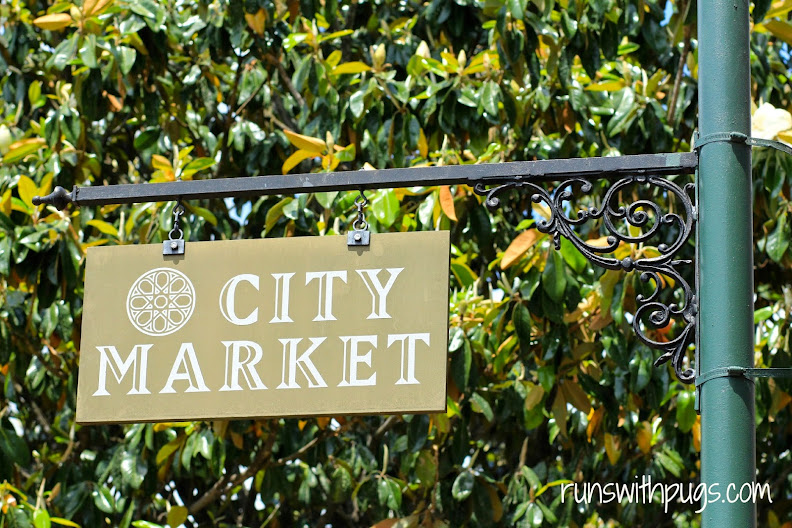 We watched the candy-making at Savannah’s Candy Kitchen and bought a few bottles of local wine at All Things Georgia.

All the walking meant we were ready for lunch, and we were so excited to try Vinnie Van GoGo’s Pizza.

Friends advised us to go here, grab a seat, order pizza by the slice (not by the pie, because the slices are twice-baked, and that’s where the magic happened), and be prepared to pay cash. So we did exactly that.

The menu was pretty simple – Pizza by the slice or in pie form, or calzones. I would have loved a calzone, but I had my eye on dessert later, so I got a slice with mushrooms, black olives and extra cheese.

As you can see, the slices were huge, and we couldn’t have attempted a second slice if we tried.

We were pretty loaded down with our wine and our full bellies, so we snagged a ride from one of the pedicabs and got a rather scenic ride back to the waterfront. We had to take the ferry back to the hotel, grab our car (we had already loaded up our luggage), and then make one more stop on our way out of town.

I am an ice cream fanatic. I would probably prefer an ice cream sundae to pretty much any other dessert. So when I heard about Leopold’s, with its retro soda fountain feel and handmade dairy treats, I had to have some.

Mr PugRunner was full, so he dropped me off in front of the shop, to wait in the rather impressive line. He drove around the block more than several times while he waited, but it was all worth it. 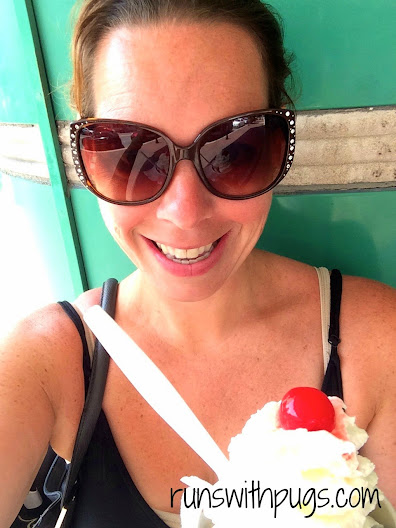 Best hot fudge sundae with mint chocolate chip ice cream. EVAR. It was such a great treat for the ride home

I was so glad we were able to get away. And I loved pretty much everything about the city. It’s been a long time since I’ve gotten to experience an “urban” area, and I really appreciated some specific things. In addition to the history, the architecture and the photo ops, I loved the artistic vibe and the inherent pride in the city. There was such a huge focus on supporting local: so many local shops and restaurants. Servers spoke of how all the foods offered on their menus were from the surrounding area, really taking advantage of the farm-to-table premise. Small vendors (like the pedicab drivers and artisans along the waterfront) didn’t have set prices for their services, but instead asked for “reasonable compensation.” Artists set up easels in the parks and along the waterfront, sketching and painting, while photographers roamed with cameras and tripods, seeking the perfect shots. It’s really the kind of thing I love.

I can’t thank Mr PugRunner enough for the weekend. It was just what we all needed, and it was a wonderful birthday surprise.

What are some things you love about your favorite city?

Are you an ice cream junkie like me, or do you have some other favorite dessert?