I think it’s safe to say that when a race has the name “Marine Corps” in it, it’s bound to be tough. 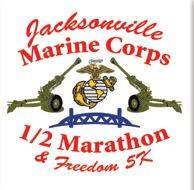 Everyone told me this race was a beast. And I believed them. But I felt it needed to be done. That doesn’t mean I wasn’t nervous. I felt reasonably well trained, but still. There was that fear of the unknown, colored by a lot of negativity. Major changes had been made to the course, as well, allegedly to remove some bridges, but since I had never run Marine Corps before, it made little difference to me. 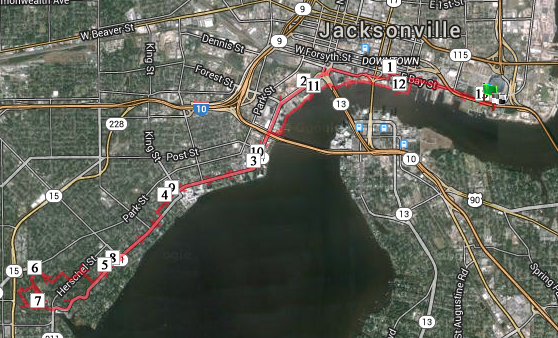 Packet pickup was on Friday, so I went to grab it. I loved the long sleeve shirt, and the little Marine rubber duck was super cute. 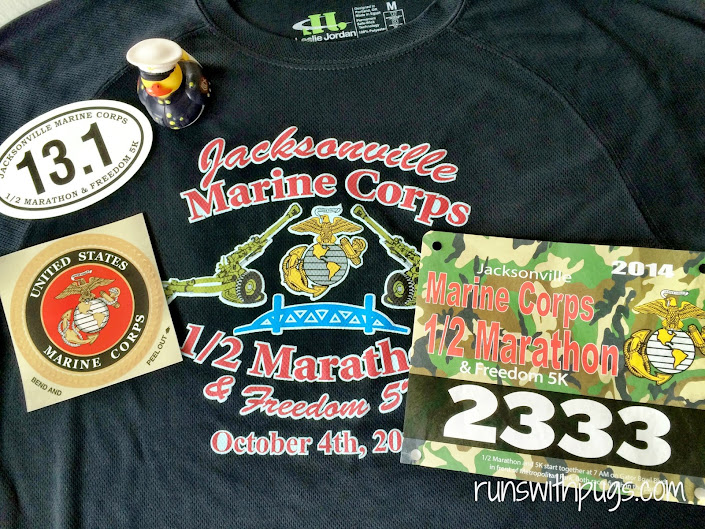 I also laid out my outfit. I had new socks and new Superfeet inserts in my shoes, so I felt extra supported and prepared (I don’t count these items under the “nothing new on race day” rules). I also definitely wanted to wear pink for Breast Cancer Awareness Month. 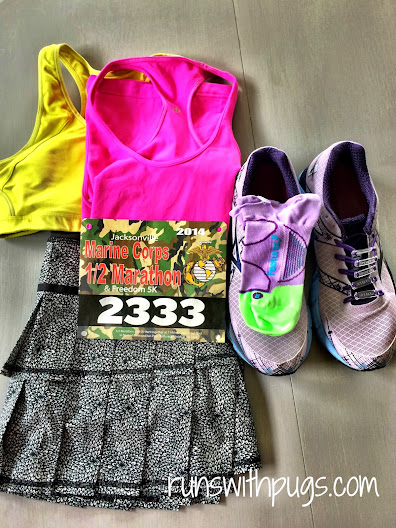 Saturday morning’s alarm rang at 4:30. I planned to meet my friend S at 5:15 and would ride with her, with our other friend T following behind. T and I were both under a bit of a time constraint because our boys had a baseball game at 10:00 AM – she was probably going to make some of it, but I didn’t have the highest hopes for myself.

We parked in the free lots at Everbank Field and hung around the car for a bit before heading to the bathroom (real ones, yay!). We suited up with bibs, water bottles and last minute gear checks back at the car, and thought we might meet up with some other friends near the start area by Metropolitan Park. As we were headed over, raindrops began to fall from the sky, and we scrambled under the protection of the overpass just in time for the heavens to open in a torrential downpour. Ugh!

S confessed that she was pretty much NOT down with running in that kind of rainstorm, and I hated that I felt the same way. I could think of nothing more miserable than slogging through the teeming rain. However, we were there, and well… it was kind of a long drive for nothing, so we huddled under that overpass, and even as they lowered the start line scaffolding, we kept our fingers crossed for clear skies.

Fortunately, we were rewarded, and as quickly as it had started, the rain stopped. 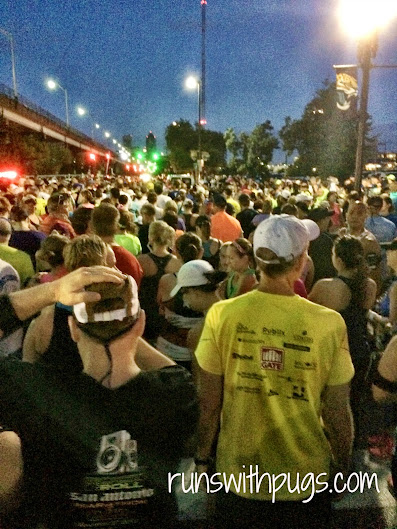 We lined up, but the 7:00 AM start time had been delayed. I actually had to go to the bathroom again, but I wasn’t sure how much time I would have to find one and get back in start position, so I decided to hold it and go on the course if need be. Not the most appealing decision, but I didn’t want to miss the start either.

The gun was practically a cannon – the group of people where I was standing was actually surprised by the blast of hot air that hit us. But it got us moving and we crossed the timing mats and entered into downtown Jacksonville.

My first five miles were pretty close to glorious. I completed them in about an hour and felt great. There was some nice cloud cover, and the route was great, despite some cobblestones and a steepish overpass to get over to the Riverside area. I am almost sure I was grinning.

And then things started to fall apart for me. Miles 6-9 wound through some neighborhoods by a park. There were lots of twists and turns and sharp corners (huge shout out to that family handing out Tootsie Rolls on the corner – they were a huge boost!), and what I have learned are called “false flats.” You know. Streets that look flat, but are really on just enough of an invisible incline that your legs wear out before you know it’s happening.

I would have shaken my fist at them, but I was too tired.

For a while, I was running next to a woman and two people who seemed to be coaching her on. She was tossing out one-liners and quips for a bit, but then got really quiet and said “I’m so tired I’m losing my personality.” I knew just what she meant.

I had a handheld of Gatorade with me, but made sure to stop at every water station for a cup of their Gatorade as well. At Mile 8, I started eating the mini Snickers I had carried as well. I was hoping for a burst. I even start singing Britney Spears songs from my playlist out loud in an attempt to get me going (and I do sincerely apologize to anyone who was in audio range of me at that time – I was clearly out of my head), but I was drained.

At Mile 9, I started to feel some unwelcome and familiar twinges in my calves: cramps. I had been hopeful that the salt in the Gatorade would be enough to replenish me and keep the cramps at bay, but nope. With my chances at any kind of PR slipping away, I slowed my pace and started taking little breaks along the course to stretch my legs on the curbs. Ugh.

We wound through the back of the Riverside Arts Market and along the river.

Then it was up the really steep pedestrian bridge and down the square, spiral ramp. I had run this before at the DONNA 5K, and I don’t mind it. It’s shaded and quick downhills can be kind of exhilarating. We headed to the Jacksonville Landing.

The miles were DRAAAAAAGGING. I didn’t think I had been weaving much, but my Garmin and the mile markers were not jiving in the least, which messed with me mentally. I started getting texts from S & T, and told them I would be along shortly, but it felt like I was just getting slower and slower. Ugh.

At the last water stop, I grabbed my Gatorade and then bent over the nearby guard rain to stretch one last time before the end of the race. One of the volunteers came over to me and asked if I was ok. I guess I looked sick or injured. I thanked her and told her I was just stretching and she asked me if I wanted her to get one of the cheering Marines standing next to the table to walk me the rest of the way in. On the one hand, how cool to have a Marine escort? On the other – I planned to finish strong if it broke me, and all the Marines were in fatigues and boots. I didn’t think it was right to ask one of them to run at the at point (although thinking about it, I’m sure that would have been nothing new), so I declined and got back out there.

People were lining the street between the Stadium and the Park and a man said to me that the finish line was just around the corner. The Garmin was reading 13.00 miles and there was no line in sight, so obviously, his idea and my idea of “around the corner” were very different. S suddenly jumped off the curb and started running with me (this meant the world to me – I was D.O.N.E. and was grateful for the distraction). She told me that the finish was after a bit of a winding path actually in the park.

It was through a field of mud.

I guess the sudden rain had turned the field into a sloppy, gross mess. At the start of the impromptu bog, S turned off and said she would wait for me, and I set one foot in the much. My shoe was almost sucked from my foot.

At this moment, I realized that I will never have that killer edge that makes a “racer.” Grossed out by the mud splatters, and cursing inwardly at the slop, I slowed out of what I hoped would be a reasonable power sprint and tip toed my way along the grassy patches to the last timing mat.

It resulted in what I will cherish as one of my most unflattering, hysterical race photos. I am making a face I usually reserve for Thanksgiving morning, when I am up to my elbows in the cavity of a raw turkey, an endeavor I find highly distasteful.

Splattered in mud from the knees down, humbled by the course and nursing stinging calves, I accepted my finisher’s medal from a Marine in full dress uniform, got my cold bottle of water and unexpected beer glass. S asked if I wanted to get a banana, but they were across another, larger stretch of mud so I passed. I did finally get to use the restroom, though. Thank goodness for small victories.

I would have liked to have stayed to check out the bustling after party, but we had to get going. I wasn’t going to make the baseball game after all, but I was able to shower (much needed) and meet up with the family for a very satisfying lunch. 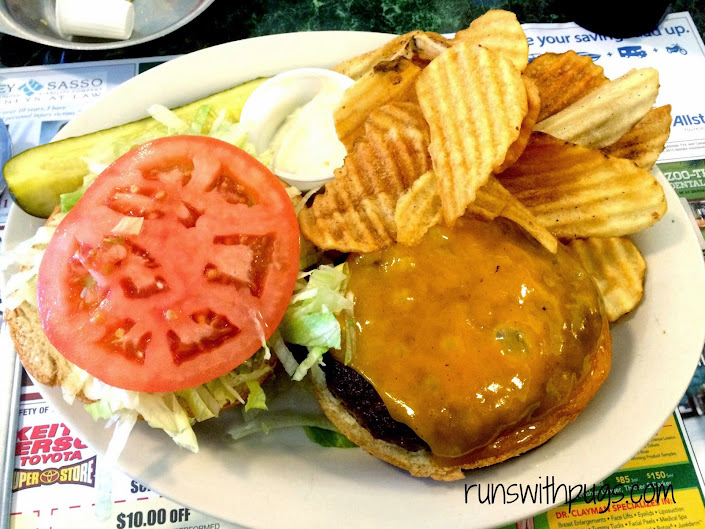 I can’t pinpoint any one thing that made this race so grueling. It was a combination of the different terrains (pavement, cobblestone, mud), the steep inclines, the twists and turns and the false flats. The sun came out full force at my halfway point and that sapped my energy. It was rough, and it left me feeling pretty badly about myself and my ability (or inability) to emerge victorious at Walt Disney World in a few months. After all, if I can’t complete a simple half marathon with a semi-smile on my face, how can I hope to complete a full?

)It was just that feeling that forced me to lace up my running shoes for the second time that day and set out for another four miles for a total of 17+. I couldn’t let the half marathon distance go to waste. It was really more of a shuffle than anything else, but miles are miles and I claimed each and every one of them.)

Of course, the bright spots came in the form of the volunteers, staff and Marines who were on hand to cheer and otherwise support the runners. The water station were plentiful and well-supplied. The volunteers were friendly and helpful. I loved the servicemen and -women in uniform stationed along the route in groups or alone, offering encouragement and support along the way. Due to the twists and turns in the road, there were countless law enforcement officers positioned to divert traffic, and they were all wonderful. Finally, despite the mud, the finish line was well organized, with plenty of Marines distributing medals to the runners, followed by volunteers handing out cold bottles of water and then more volunteers handing out beer glasses. The after party seemed well attended with lots of food, beer and activities, too.

I walked away from this race with a practically indestructible glass (I dropped it in the parking lot and miraculously it survived unscathed!), a medal, muddied running shoes and a bruised ego. I’m shaken, but not defeated, and so I’m just going to get back out there and push harder. 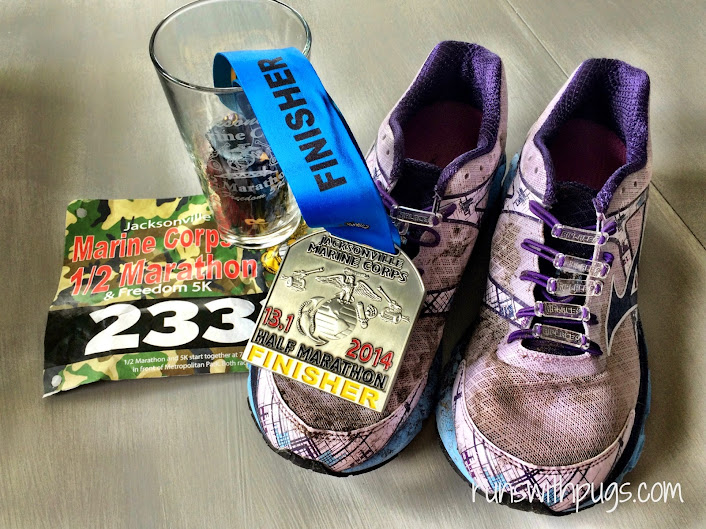 What is one thing about a race course that really throws off your game?