One of the unexpected side effects of running is that I have found myself a lot more adventurous. Maybe it’s self-confidence – I’m no longer afraid of people point and laughing at the unathletic girl struggling and failing. Or maybe I’m at a point where I subconsciously realize that I have done enough sitting on the sidelines and I owe it to myself to try new experiences.

Five years ago, I never would have hooked myself up to a cable and dangled over an alligator pit.

And I am also fairly certain that I wouldn’t have paid a sum of money in order to run 26.2 miles. Voluntarily. In public. In shorts. 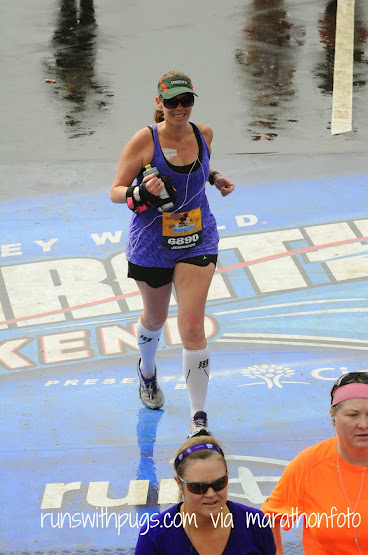 But over the last three years, I have done both of those things, among others, and I have the feeling like there is so much more I need to do and see and try.

It’s been way too long since I’ve been to yoga – work and little man’s schedule, combined with juggling running for both me and Mr PugRunner have limited my time – but I do stay in contact with my former yoga instructors and keep up with the cool events they host. Since last year, I have been telling myself that I should try one of Mady’s stand up paddleboard yoga classes, but for some reason, it just never happened.

However, a few weekends ago, a reminder for the SUP class popped up on my Facebook feed. The class was on a Sunday night, and I wasn’t able to attend, so I messaged Mady to ask when the next one was going to be. She responded that she had a session going out the next morning at 9:30.

And that she was reserving my board.

No way could I back out now, so after I dropped little man at camp, I headed down to Salt Run by the lighthouse to meet up with her and the group. 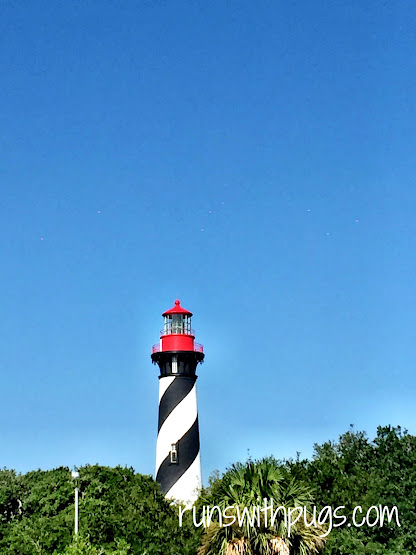 I was so. Freaking. Nervous. I was absolutely convinced that I wasn’t going to be able to get on the board, and that I was going to make a huge laughingstock of myself.

The paddle boards were provided by a company called The Salty Paddle.

I know exactly nothing about paddle boards, but these seemed very new and well maintained.

Mady arrived and introduced me to owners Warren and Denise, and we helped pull the boards down to the water’s edge while we waited for the rest of the group. I think we had about eight people, total.

Since I had never been on a board before, I got a quick lesson on balancing and paddling. Denise adjusted the length of my paddle and we all got the rundown about paddling our knees until we reached a certain point of the inlet, before attempting to stand up if we so desired.

I thought the hardest part would be actually getting on the board, but as long as the bottom fin was clear of the bottom, we were able to hop on, which meant not having to rely on upper arm strength. Yay.

For the paddle out, I stayed on my knees. It took me a few strokes to get the hang of the paddle, but I felt incredibly comfortable. All things considered.

Our entire group made its way to a designated spot where Warren was waiting with an anchor and line. The goal was for everyone to get tethered to the line so we wouldn’t drift during our practice. I struggled getting in position, but Warren was very gracious, and helped get me turned around so he could tie off my board. And paddle. I didn’t like not having the paddle.

By the time, we were ready to get started, and Mady led us through a very gentle flow. It was certainly challenging. the water was pretty calm, but there were poses I just couldn’t achieve because of the rocking of the board and trying to maintain my balance.

I was able to stand up. I was not able to balance on one foot. My upper legs were shaking so badly most of the time, and I definitely had to modify some of my poses to accommodate the exertion. 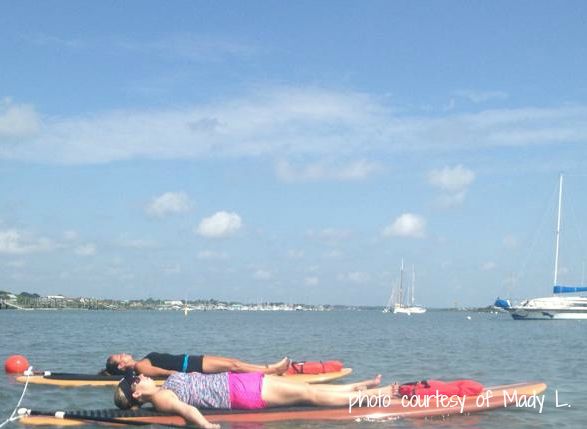 After the official class, Mady encouraged us to play around with some fun poses. Some of the people in the class were able to do amazing inversions, while I managed this two-footed tree. 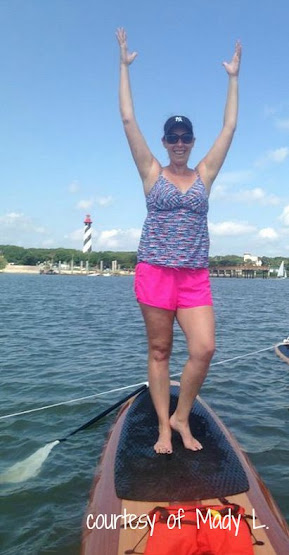 We also took a few minutes to enjoy the beauty of the day, and that’s when we saw dolphins! 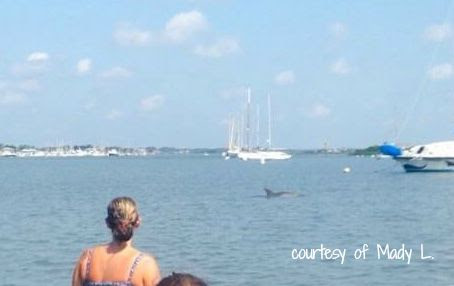 It was incredible, being so very close to them.

And then it was time to unhook from the line and paddle back in. I did stay on my feet for a few strokes, but my legs were still shaking badly, so I dropped down for the rest of the way in. 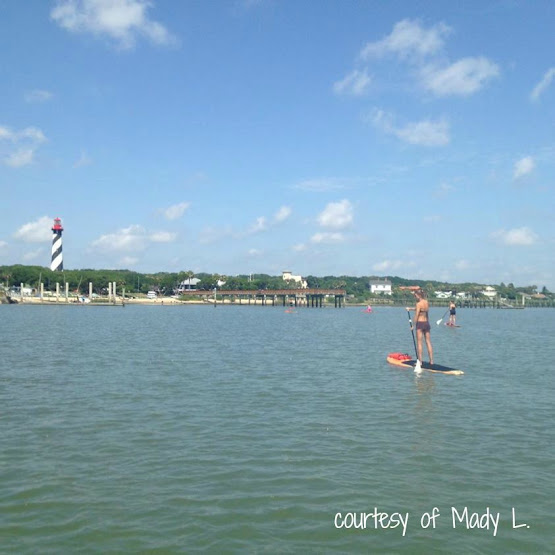 Was I sore? Oh, yes. But I really enjoyed it. And I want to go back to try again. I absolutely loved the challenge and I see so much room for self-improvement. I’m also incredibly grateful to Mady for giving me the push. 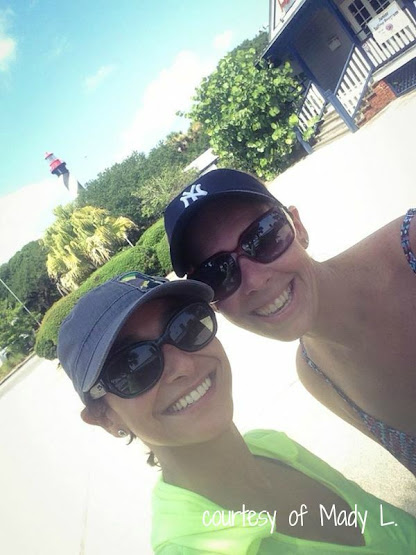 Here’s hoping I can enjoy another few rounds before the water begins to get more rough in the fall. 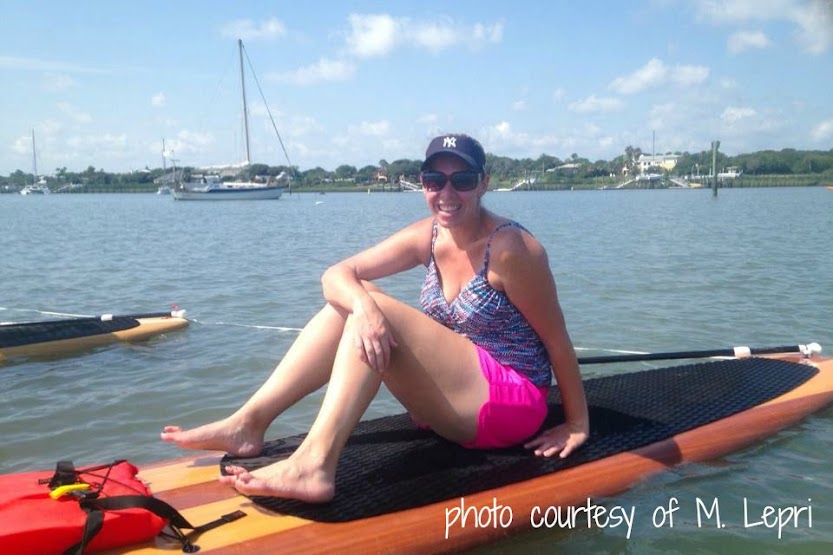 What’s something you have done that terrified you but you ending up enjoying?

Would you ever try yoga on a stand up paddle board?