I have come to look forward to the Evergreen Pumpkin Run 10 Miler. 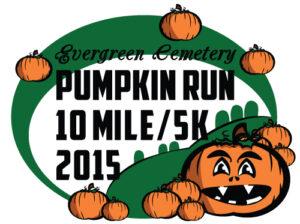 It’s generally at a good time of year, it’s a good distance that I don’t usually get to race and the course takes runners through the most historic (and beautiful) cemeteries in the city.

Last year, Mr PugRunner and I stayed in a hotel not too far from the race, and followed our first attempt with a trip to the Jaguars vs Dolphins, but this year, we opted to just make the early morning drive, along with my friend S as our passenger.

The morning of the race did not start well. Mr PugRunner, already plagued by some minor injuries, managed to fall down our bottom two steps and wrenched his knee. He made the game time decision not to race so he wouldn’t do any further damage.

I left him icing his knee and made my way to a prearranged meeting spot to pick up S. I was a few minutes early, and parked to listen to some music. Of course, my timing was perfect: I was approached by a police officer, who was quite curious as to why I was sitting in my car, alone, at 5:30 in the morning. I showed him my bib and explained that I was picking up my friend to make the hour drive to a cemetery to run 10 miles. I got the feeling he was almost sorry he asked. I’m not sure if he was horrified or amused but he wished me luck and drove off.

S showed up and we were on our way. I was not very familiar with the part of the city were the race was located, and the GPS took us a little past the entrance to the cemetery, but we got righted and parked with plenty of time to spare.

The  morning was warm and muggy, a complete reversal of last year’s brisk temperatures. Boo. We had a bit of a hike from our parking spot to the inside of the park, so we brought bagels for the walk, and hopped on the restroom line.

We watched the beautiful sunrise, met up with friends and tried to acclimate to the humidity.

This year, the race was a total sell out. I am guessing part of it was that this year, medals were being awarded to the 5K participants. The first 3.1 miles of the race would be crowded, especially on the narrow cemetery paths. S and I strategized that we would just go with the flow, stick with our 2/:30 intervals and let it all happen. We lined up at the start and got ready to go.

From the minute the gun sounded, something was wrong. My legs felt like lead, and S confessed that hers were, too. Ugh. Even worse, I had to go to the bathroom! Two trips to the loo prior to the race apparently did nothing for me. S said she had to go, as well. It was nice to be experiencing the misery right along with someone.

As we rounded the loop for the first 5K, we saw the bank of portapotties. I looked at S and she looked at me and we both bolted for the open doors. To add insult to injury, the unit I had selected was out of toilet paper. I flew to the next available portapotty and took care of business. We were back on the course in no time.

I think it was the first time I ever stopped for the bathroom during an actual race.

On the plus side, I felt a hundred times better, and mostly ready for the next 6.9 miles.

The weather was a factor. I felt incredibly depleted, and despite Gatorade and Gu, I couldn’t get myself back on track. The tree-lined cemetery paths were lovely, but the long loops on the roads surrounding the park were unshaded and mentally draining. We plugged along, and finally, at mile 8, I told S to go on. My stomach had just started churning and I realized I was going to be sick. I had to pull over to some bushes and give myself a few minutes, but I was back at it pretty quickly.

After that, it was just toughing it out through the hot morning. I was pretty low on energy, and my legs were over it entirely, but I was finally at the finish line and kicked it in for a nice PR.

I had a hard time celebrating just because of how hard everything was. But then I had to realize that I beat my time in spite of the weather, the tired legs, the bathroom break and the upset tummy. That’s a worthwhile accomplishment and evidence of the hard work I’m putting in.

S and I made the walk back to the car and changed into dry shirts. We were both starving so we stopped at Panera on our way home for an early lunch. I don’t think salad ever tasted so good.

It felt good to have a solid long run done and out of the way. It was also good to see some serious progress.

How do you deal with the feelings that you didn’t perform at your best, even when your results say you did?