Honestly, I’ve been enjoying my time off. The problem is that I do have a few races coming up in January, and some even bigger ones in the months following, so I need to kick it back into high gear.

This week was a little unusual because of some major travel. However, I packed my running gear and made it a point to take advantage of the weather and the new venue for a nice run.

I hopped up early and got all my last-minute things done around the house. I had to drive to my parents’ house, say goodbye to little man, and then Papa Bear gave me a ride to the airport.

In all honesty, I am a BAD flier. I love traveling, but the actual “getting” there is hard for me. The flight did go easily, and I landed in JFK on time. Despite rumblings that baggage pickup would be awful, I got my suitcase pretty quickly and the car service had me within 35 minutes of getting off the plane. Not too bad.

Mr PugRunner was finishing up with his conference at the same time I was settling into the hotel room. We got a snack, and then it was time to check out the tree at Rockefeller Center and get dinner.

It was a madhouse – the crowds were absolutely out of control. We walked all around the plaza, and got to see the first skaters of the evening take the ice, but it was also good to break free of the people and walk to dinner.

We were both pretty exhausted and went to bed right after dinner.

While Mr PugRunner slept in a bit, I laced up my new Adrenalines and hit the pavement. I had never run in a city before, and was so excited. I headed up 8th Avenue to Central Park, and joined the rest of the runners and walkers in the park.

It was the most wonderful experience, and I felt great!

We spent the rest of the day visiting Santa at Macy’s on 34th, 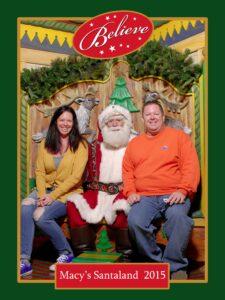 wandering the streets, and then enjoying a date night at Lavo.

There was no way I could sleep in, even after a late night. After breakfast, we walked down to the  American Museum of Natural History. Little man had asked me to take some pictures of exhibits made famous by Night at the Museum, and it was fun hunting down different items among all the displays.

After lunch, we stumbled upon the Star Wars and the Power of Costume exhibit near Times Square. At first, we were going to skip it, but we had time, and the employees stationed at the information booth promised that it was worth it. The exhibit featured 70 costumes actually worn in all seven Star Wars movies and we could linger as long as we liked, taking as many pictures as we wanted.

It ended up being really cool.

That night, we had tickets to see Les Miserables. It’s my favorite Broadway show, and I loved every second of it (again).

For our last day in the city, I still had a few things to see. We started our morning with breakfast at a diner, then we walked down to St. Patrick’s Cathedral. My mom said they had been doing a huge renovation and was curious about it, so we checked it all out for her. It’s still one of the most beautiful Catholic churches I have seen.

We stopped for one last peek at Rockefeller Center,

and for one last cupcake.

And then it was time to get our car back to the airport. Womp womp.

We arrived a little early, but there was no traffic, and security wasn’t crowded. We had a leisurely lunch in the airport, and then had an uneventful flight home.

It was good to get home to little man and the pugs, but in all honesty, I miss NYC so much.

I had to go back to work, so Mr PugRunner took the afternoon and attended little man’s winter party at school. From what I hear, they had a blast – there were all kinds of cute games and activities. They made Christmas trees out of ice cream cones and frosting, played pinned the nose on the snowman and marshmallow toss, and even wrapped up their teacher in green crepe paper to look like a tree. I’m glad they got that time together.

Due to time constraints, I opted for running over body circuit. Ideally, I would have done both, but Mr PugRunner was having his company lunch and he wanted to leave on the early side. It was ok. Despite a little mist, I felt great, and it helped clear up my sinuses, which had been suffering since I got home.

Little man had early release from school: it was his last day for the year. We had talked about taking him to do a little shopping, but Mr PugRunner had a crazier plan: to take him to see The Force Awakens, instead.

We had planned to see it on Sunday night and then take him on Monday, but…. Well, I wasn’t saying no. I ordered tickets online, we got him from the bus stop and headed to the theater.

All I can say is that is was amazing. I have burning questions (for which I am sure the answers will come), but am mostly satisfied. It was light years better than those sorry excuses for Episodes 1, 2 and 3, too. I will be seeing it a few more times, to be sure.

And little man? He gave it two thumbs up (and was sworn to all levels of secrecy. He’s been holding strong).

Little man and Mr PugRunner held down the fort, while I did some errands. My cousin was in town and she had generously offered to take some family gifts down south with her when she went home, so I wanted to take advantage.

In the meantime, it was a big day for little man. He would be testing for his yellow and black striped belt in karate. He has been working very hard over the past few months, and this was going to be a challenging test. For the first time, the students wouldn’t really be getting any help from the instructors, and they would be tested in combinations and simulated sparring, rather than individual skills. I may be biased, but he did great. He took his time on each move, and his combination and forms seemed very strong and precise.

At the end of every test, students have to use a chosen skill to break a board. In the past, each child has had one board, but this time, instructors handed out boards based on age. Since little man is only seven, he was given one board, but he raised his hand and asked if he could have to. At first, the master said no, but then reconsidered.

We had a celebratory lunch, and then little man went home with my parents and we headed back to the house. I had to decorate the tree.

Delilah was pretty excited about everything. I have to wonder if she’s ever had a Christmas before. It will be pretty cool to see her with her stocking and presents this year. I hope she loves it.

The next few days are going to be given over to holiday merrymaking. I completely dropped the ball on Christmas cards this year, so I need to really step it up in other ways. Going on vacation in the middle of the holiday season makes things a little more challenging, but we will get it done and it will be a great Christmas.

How is your training going in the midst of the holiday season?
Do you have any special plans for the rest of 2015?