As you can imagine, I had no desire to do anything on Sunday. Getting out of bed in itself was a chore. I felt fine after Ragnar, but I admit to being bone-tired. We brunched with my parents, and then we all worked on decorating the tree and baking Christmas cookies. I was very grateful for the help that day.

My biggest plan of the day was to sit on the couch in my PJs and watch The Crown on Netflix, but Mr PugRunner asked me to join him from lunch and a trip to pick up little man’s Christmas gift. It was a nice outing and it was great to hang out with him after a few days away.

I was scheduled to return to work and spent the hours catching up on everything I had missed and getting organized. It was a fairly busy day, which made the time pass quickly.

After work, we all went to karate and then out to dinner. I was looking forward to having the rest of the week to work on holiday things, but also realized that I was starting to feel a little sloth like. A new yoga studio had recently opened near my house and I decided to schedule my free trial class for the morning.

My body was absolutely thrilled with the slow, deep stretches of this class. I know it’s been a few months since I’ve been to a yoga practice, but I didn’t feel like I was very far behind. In fact, I was so pleased, I signed up for their introductory special, and am looking forward to more time there.

Refreshed and energized, I finally put the finishing touches on the tree. There are still some holiday things that are missing around here, but I think we are going to have a lovely Christmas.

Since the hatha flow was such a success, I decided to go back for the vinyasa class.

It was pretty intense, with a lot more downward dogs than I was hoping for, but I kept up and felt fabulous after.

Mr PugRunner had planned to make pulled pork on the BGE, and so we invited my parents over to share it with them. I had to help my mom order my Christmas gift: a registration to the 10K + 5K Challenge at Best Damn Race Orlando. Want to join me and earn some flocked flamingo bling? Just use code RUNPUGS to save $5 on any Best Damn Race distance in any of the remaining cities! 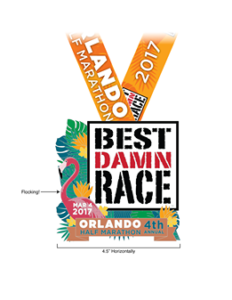 Much as I was dreading it, it was time to start running again. I was hoping to put it off for a few more days, but a friend was going out for her (really) long run, and invited me along for a portion of it. I committed to four miles, and was really surprised to feel decent.

The company and the view made it so much more tolerable.

We had a White Elephant Christmas Party with friends that afternoon, and we had a great time with a gift exchange. There was even a parade with Santa and Mrs. Claus that came through the neighborhood.

And there it is. The quietest week I’ve had all year! I tried to be good about resting and recovery, and even embraced it a little. That being said, I was also really glad to get back in the saddle. I’m excited to have yoga a little closer to home, and I’m hoping I can work some more classes into my schedule.

What are your fitness plans for the rest of the year?