Posted on January 2, 2017 by runswithpugs

It’s 2017! Happy New Year! I hope you all had a wonderful day and are ready to dig in to the new year. Confession – I didn’t make it to midnight (although I was close), but that’s ok. I was well rested for the first day of the year.

MERRY CHRISTMAS!!!! I think this picture sums it up pretty well.

We had THE BEST day. Seriously. The best. Usually, I set my alarm super early so I can get up and get our big breakfast in the oven to be ready for when my parents show up (also early), but we changed things up this year. Don’t get me wrong, we were still up early, but all we had to do was crank up the holiday tunes, warm the cinnamon rolls and enjoy each other.

Little man was so grateful for everything. He is at an age where his gifts are a little more grown up and I was almost in tears over how appreciative he was. Parenting is hard, but it felt like we have been doing something right.

We went outside to play with one of his toys, and the kids in the culdesac ended up going to another house to decorate cookies and have hot chocolate. Normally, I wouldn’t have considered it because it just wasn’t part of “the plan”, but this year, I let him go and he had a blast.

My parents came over for a late lunch

and we had such a great rest of day. It was all just perfect.

Even Bentley thought so.

We went to bed with very full hearts.

I didn’t really want to go out for a run, but I did want to try out my new Garmin Forerunner 735XT.

Guys, this watch is everything. I don’t know how one little piece of equipment could make such a difference but it does. It was a fabulous run, and I am looking forward to many more.

I did have to go to work, so little man went to his friend’s house for the day. They had a blast entertaining each other, so it was a good day.

I had the day off and wanted to make the most of it. Little man wanted to use his Tropical Smoothie gift card, so I suggested we get out the bikes and take a ride. It was really foggy, so we made use of the Christmas lights on them to help with visibility.

Afterwards, we paid a visit to the in-progress St. Augustine Aquarium. There is definitely plenty of work to be done, when it is complete, it’s going to be wonderful. I’m excited to try the zipline course.

Next was lunch and then little man went home with his grandparents for the night.

Another fabulous run. I was really missing K and our morning chats, but it was nice to be able to run in the daylight, too.

I had a short day of work, and the hours flew by – because it was Game Day!

Our family, Papa Bear and our friend R were making the trip to Orlando to watch the Hurricanes take on the WV Mountaineers in the Russell Athletic Bowl! Kick off was 5:30 and we made it to our parking spot in plenty of time.

The first quarter was rough, as the Canes settled into their groove, but after that, it was smooth sailing to victory!

We stayed after the game for the trophy presentation, and then the players came around the field to high five and take selfies with the remaining fans. Magic.

We didn’t have a restful sleep. Mr PugRunner ended up with food poisoning from some bad jerky and was up most of the night. I was really worried that it was the stomach bug, and spent the morning getting Papa Bear and little man out of the house and scrubbing everything down. Fortunately for the rest of us, it was an isolated thing, and Mr PugRunner was feeling much better after lots of fluid and rest.

For my part, once all the laundry was done, I parked my butt in front of a Game of Thrones marathon. I can’t say it was a bad way to spend the afternoon.

Also? Team Pretty in Pink is ready for the 26.2 with DONNA Marathon Relay! I am really looking forward to it. It’s the 10th anniversary of this race, and our team is made of some truly incredible women. 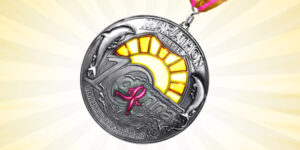 I was hoping to go for six miles, but it was freezing cold (literally) and 5.3 was just enough.

Mr PugRunner was feeling better so we decided to go to the outdoor mall. I had to do some shopping for his birthday on January 1, and he needed the fresh air. All in all, it was a very relaxing afternoon, and I was glad we were able to spend some time together.

He was still pretty tired, so after we got home, we just watched some movies and hung out on the couch.

It felt pretty good to not have to set an alarm. We were expected at my parents house around 12:30 for a New Year’s Eve celebration, so we took our time getting ready. We always have a great time there, and enjoyed ourselves immensely.

At home, Mr PugRunner and little man made it all the way to midnight. Molly and I certainly did not, but let the boys have their fun. I wasn’t too disappointed not to see the ball drop. I was ready for 2017 either way.

Don’t forget, we are giving away an Armpocket Flash to celebrate the New Year! You don’t want to miss out on this one!

How did you ring in the New Year?