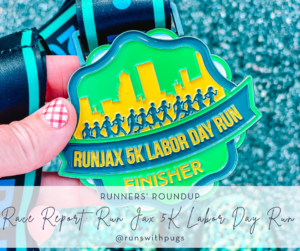 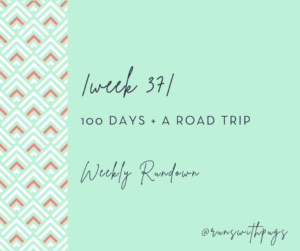 The only thing on the docket was spending the afternoon at the beach. We really hadn’t seen very much of Mr PugRunner with his recent work and travel, so I was glad that he wanted to join us for a beach day with some of our Scout leaders and their families.

We got a light dinner and ice cream to end our perfect day.

My watch only shows 6 miles, but I forgot to restart it after pausing to take some pictures for an MRTT scavenger hunt. Whoops.

Then it was back to the beach for a day with my friend and her daughter. We have really been on a beach roll, but the car was pretty much all packed, so it was easy enough to just replenish the cooler and go.

The kids had a blast in the tide pools and surf, and we had al lovely lunch together at a nearby waterfront restaurant before running some quick errands and going home.

Even though he was tired, little man was a trooper for karate: he is about ready for his next belt test and is tightening up a few moves.

We had a last minute change of plans for the morning, but we just went with it. In the afternoon, one of little man’s buddies came over for a sleepover. I wanted to wear them out a bit, so, you guessed it, back to the beach!

This time, there was boogie boarding and sandcastle building, and I confess that it was tough getting them to wrap it up, they were having so much fun.

I snuck out for a quick run while the boys were still sleeping (and boy did they sleep!).

We dropped his friend back home right before lunch, and chilled the rest of the day because of the storms that came through. While it’s fun to be on the go, it’s also awesome to catch up on some movies and do nothing.

To change things up, we drove to a blueberry farm about an hour away from us. I don’t think we have ever picked blueberries before, and it was a blast. It was more of a quiet hobby farm, and due to the rains, there were still plenty of berries. The owner gave us pails and advised to go further back where fewer people had checked. As a result, in under an hour, we had four pounds of delicious fruit.

We celebrated with lunch and then a trip to Snogenix, a new place that features Taiwanese shaved “snow” (basically flavored ice that is shaved by machine from a cylindrical block) It’s light like ice, but melts creamy like ice cream – it’s so unique, with awesome creative flavor combinations.

And then little man made blueberry crumb muffins.

He did a fantastic job.

I had to head out on this run a little earlier than I would have liked on a summer Friday, but got in the miles I wanted to run.

The plan for the day was to celebrate World Oceans Day with a beach cleanup, hosted by Palm Coast and the Flagler Beaches. We were to meet at the parking lot outside of Marineland and all bags, gloves and water were provided. We had 90 minutes to haul as much trash as we could.

There ended up being about 200 volunteers, who collectively pulled in over 800 pounds of trash and debris! We accounted for 46.5 pounds of it, which is pretty epic. We also met up with some other friends from the St. Augustine Moms Blog, who hauled their share as well.

It was a fabulous way to give back and to also see the importance of cleaning up litter so it doesn’t go back into our oceans.

With the dirty work behind us, we enjoyed the waves and the beach a little longer (and for the first time, I saw these amazing balance rocks!)

And then we grabbed lunch at a new-to-us BBQ joint nearby. I was famished and pretty easily demolished this plate.

I had hoped to run, but I had gotten bitten by a yellow fly on the side of my knee at the beach. It was painful and itchy, swollen and hot to the touch. As a result, I slept terribly and had a hard time putting weight on my leg. It was doable, but not pleasant.

I spent the rest of the day applying rubbing alcohol and taking Benadryl, hoping to get some relief. We finally left the house in the mid-afternoon, for another trip to Snogenix. Mr PugRunner hadn’t been yet, and so we tried some new flavors.

And then, since it was kind of dinnertime anyway, we snagged a meal at 4 Rivers. It was still early and they weren’t busy, but they were preparing to celebrate five years at this location. The GM started chatting with us and when he heard that we had been patronizing the establishment for as along as they have been in town, he offered us a tour of the kitchen! It was so cool (and so very clean), and we very much appreciated the kindness.

Not too bad on the miles, and we are still keeping our Summer Bucket List active. You can check out some of the things we are working on, here.

I am hoping to get back in the saddle this week (literally), and that the rain is all done. We will have a bit of a break from daytime beach and pool sessions because little man has some camp, and then the upcoming weekend promises to be a combination of crazy and fun with a 5K and Father’s Day and all kinds of cool stuff.

Do you have Taiwanese snow where you live?

I am not a doctor or medical professional, nor do I play one on the internet. This blog reflects my personal experiences on my own fitness and running journey, and the processes that work for me. Before you begin any exercise regiment, please consult your physician.
Up and at’em! Normally, Saturdays are for long r