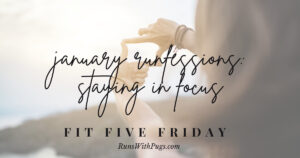 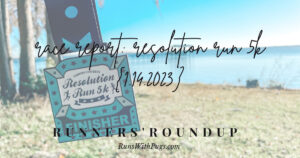 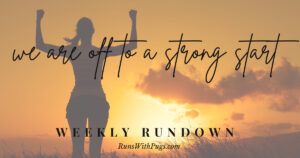 It’s time for the first race report of 2023: the Resolution Run 5K! Whoo hoo! I love a good race report, don’t you?

Packet Pick Up + The Night Before

Everything in my life is total chaos at the moment, but I did have the foresight to pick up my packet in advance at the running store location closest to my home. It was very no frills: a bib and our long-sleeved, unisex cotton shirt, safety pins on the side. Honestly, I like it just fine that way. The bags of flyers and samples are so overwhelming and wasteful, especially in this digital age.

The race starting venue was the Best Bet in Orange Park.

The parking lot feeds right to River Road, where the course winds along the very beautiful St. Johns River, so it’s perfect. I had to get up even earlier than normal, to care for the pugs and the pets I was sitting for. Also, Mr PugRunner decided he wanted to join me, so there were quite a few moving parts.

I’m not going to sugarcoat things: it was brutally cold with a feel-like temperature of 27ºF. For a hot minute, I contemplated bailing on the whole thing. But I was awake and dressed, even if it took me several attempts to settle on appropriate layers.

Since I already had everything in order, Mr PugRunner and I sat in the warm car to wait. I ate a half of peanut butter sandwich since I had been up a while, and was hungry. After a while, I braved the icy temps to use the restrooms in the casino. It was nice to not have to deal with freezing port a potties.

Finally, the start time drew near, so we left the car and headed to the start line. I got ahead of him, as I was trying to warm up, and found one of my neighbors in the crowd. We got some pre-race pics of the river before finding our places at the start.

The Resolution Run 5k is a straightforward out and back on River Road. It used to be a fairly awful terrain with potholes and tripping hazards, but they have since fixed the road, and now it’s a pleasant run. There are some little hills (you know how Florida people feel about hills), but nothing too crazy.

I wasn’t super happy from the start. I was suffocating in so many layers, but also super cold. Also, my watch didn’t start properly, so that was distracting me. Ugh. The course was a little crowded, so I did have to keep my wits about me, but I also managed to get out of the worst of the masses fairly quickly, and I was grateful for that.

There was sun and a wind, but it was coming in from the side, and I struggled with what to do with my fleece. I finally decided to make it to the turn-around and see if that changed things. If the wind was gone from that side, I could strip down. If not, fine. And I did end up removing my gloves and my outer layer at the halfway point. In fact, I was pretty annoyed that I wore tights instead of shorts. Oh, well.

The cold air really burned my lungs and throat, but I kept pushing. I honestly just wanted to be done and back in the car. A man dressed in a Batman shirt passed me on an interval break and started encouraging me on, so I pulled it together for the run to the finish. I was super surprised when Mr PugRunner yelled my name and snapped a photo.

I snagged my medal and skipped the water. It was too cold and I just wanted coffee and a hot breakfast. The scenery was too pretty to pass on medal photos, though, so I made Mr PugRunner weather the cold for just a little bit more.

Mr PugRunner had been super vocal about my time, which, at first, didn’t seem too great. But then I checked back through my records, and this was three minutes faster than my 5Ks in December, and the fastest 5K since 2021! Yay!

What’s the coldest race you’ve ever run? How many times have you changed your race outfit before heading out?

Need help? Check out this amazing worksheet from Honeystinger to get you started!

Link up each week to post your favorite running tips, experiences, race and training recaps, workouts, gear, and coaching ideas. Join your hosts Coach Debbie Runs, Confessions of a Mother Runner, Mile by Mile, and Runs with Pugs, each week for the Runners’ Roundup linkup! Your link must be running related. Unrelated links will be removed. You must link back to your hosts — it’s common courtesy and a lot more fun! Spread the link-up love by visiting at least two other #running bloggers! Leave a comment and find new blogs to read! Use hashtags #running and #RunnersRoundup to stay in touch and promote your content!