We learned one thing from our first Couch 2 5K outing.

Little man was not going to be able to keep up.

I did some plotting and figured out a plan. I would do my sessions of Couch 2 5K in the morning, when I was accustomed to working out. Then, in the afternoon, when Mr PugRunner wanted to do his, our son and I would join him, on bike and foot respectively. I would do the walk/run intervals with Mr PugRunner until our little guy started to get tired, and then I could peel off and take him home, while Mr PugRunner completed his time.

Since I was used to almost daily speed walks anyway, I didn’t think a few extra minutes of jogging would lead to any strain or injuries. And deep down, I was excited to get in a double whammy of exercise.

Day 2 was great. My only major complaint was that my thighs were sore from Day 1, but nothing I couldn’t handle. I expect that soreness will diminish as I get used to the new movements.

It looked like my pace was corrected for this outing: I completed 2.12 miles at a rate of 11:24 per mile. 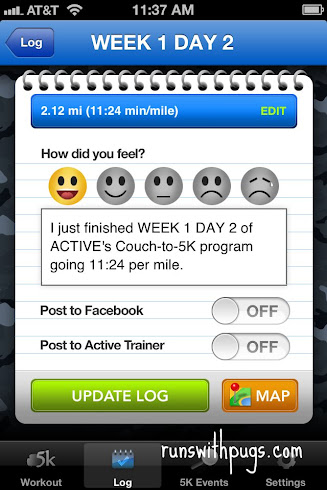 I was actually looking forward to Week 1 Day 3.