We’re huge sports fans over here. We don’t necessarily agree on the same teams (which is why I, a Dolphins fan, and Mr PugRunner, a die-hard Jet, have compromised and support the Jaguars), but we do have the New York Yankees and the Miami Hurricanes in common.

Which is why we made a long weekend out of going to a Spring Training game at George Steinbrenner Field in Tampa. It’s much closer than trekking all the way to Yankees Stadium, and it’s a far more intimate experience.

We left on a Thursday, after picking little man up from school, and headed directly to our hotel, the Grand Hyatt Tampa Bay. All I can say is that if you have the opportunity to stay here, please do. It’s a gorgeous property with a beautiful pool, great dining, and amazing views.

When we looked out our 12th floor window, this is what we saw. It was near impossible to pry Mr PugRunner and our son away.

Service was absolutely flawless. At breakfast on Saturday morning, one of the hostesses overheard little man asking about strawberries on the buffet (there were none, and we got him some other fruit). Not five minutes later, she appeared with a bowl of gorgeous, sliced berries for him. The next day, she approached our table and asked him if he would care for strawberries today, too. He was happy with his watermelon and told her no, thank you, but I was touched that she remembered and took a moment for him. Love that attention to detail.

We got settled in and then headed off towards the Tampa Bay Times Forum, home of the Tampa Lightning, where we had tickets for that night’s matchup against the Islanders. After a quick dinner at Taverna Opa in Channelside (good meal, but slightly disappointing because they were serving from a limited event menu, so I couldn’t get the kefalotiri saganaki I was craving), we found our way to the arena.

The seats were great, a few rows up behind the goal, and while it wasn’t the most exciting game score in terms of action, little man had a great time. It was his very first ice hockey game and he loved it. It’s too bad we have to travel for NHL, but we’re both thrilled he got to experience it. 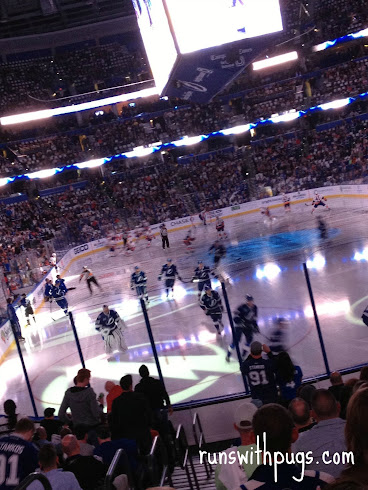 The three of us were exhausted and went straight to bed, knowing we would have to be up and out early on Friday. The Yankees game didn’t start til 1:05 but “they say” if you get there when the gates open, two hours before game time, you might possibly be able to get close to the players at batting practice, and maybe get some autographs.

We entered the beautiful stadium and made our way down to the aisles behind home plate. I was hoping, hoping, hoping that we would at least get a glimpse of Derek Jeter (my favorite baseball player EVAR), and I almost passed right out when he walked on to the field. He hung out, watching some of practice, and then made his way to the crowd of fans (Some were on the field – they had paid for a breakfast and meet and greet, so they got all up close and personal. Lucky ducks). I handed off our baseball to Mr PugRunner, who grabbed little man and headed into the (mild) fray. I snapped some photos as Jeter signed autographs and moved down the line.

And then I heard a voice. A familiar, four year old voice. A voice I would know anywhere, and one that I know (for an absolute fact) has no volume control.

Derek Jeter answered back. “Hey, what!”

And Derek Jeter looked up. He smiled. He nodded. And so little man’s baseball passed down a few people into the hands of the Yankees team captain. Swoon.

At that point, my day was made. But there was more to see, and we spent the afternoon, enjoying some March baseball in a glorious setting.

It was great. And it was a wonderful for little man to see what can come after TBall. There were several teachable moments, most notably pointing out that neither the Yankees nor the Marlins spent their field time drawing in the dirt. Fact.

But the fun wasn’t over yet!

We met some friends of ours for dinner. They took us to Hogan’s Beach, owned by none other than WWF legend, Hulk Hogan. We ate outside (Yes, you want to get something from the sushi menu), watching the sun set over the water, while being treated to this most fascinating show. I have no idea what you would call this, but it was pretty dang cool.

Mr. Hogan was not at the restaurant that night (allegedly, he often is), but as we were waiting at valet, we saw another gentleman who looked like he might have had his hand in the professional wrestling ring. Lo and behold, it was none other than WWF announcer Jimmy Hart, the Mouth of the South. Who, when asked, was more than happy to pose with our little guy.

Saturday came all too soon. We broke up our long drive home with a trip to IKEA (we call it Mommy’s Theme Park), and a leisurely lunch at Elephant Bar. And then it was back to the real world and celebrating St. Patrick’s Day.

It’s a trip we would love to repeat regularly in the future. This time was a little rushed due to a packed schedule, but we will be able to plan better next year and spend more time enjoying the area and all our friends and family who live there.