I was simultaneously excited and afraid. And nervous. Very, very nervous.

It was 39 degrees out, so freezing by my standards. However, the sun was shining and my brother-in-law, a marathoner himself, promised he would take us to a great (flat) trail to complete our sessions.

There are a lot of hills in North Virginia, and… well… I’d be lying if I said it wasn’t daunting, compared to the even terrain here.

We tumbled out of the car next to a very lovely and well-marked bike/run/horse trail. We would only be using about three miles of it, but it allegedly extends all the way into Washington DC. For the really dedicated folk, I’m guessing.

My brother-in-law pointed out the way, explained the markers and then dashed off, sprinting like the graceful gazelle, leaving me and Mr PugRunner to fend for ourselves.

Mr PugRunner was still working on Week 5 Day 2 (two eight minute runs split by a five minute recovery walk), so after our walking warm up, he passed me up on the trail while I tried to maintain a slower pace that would last me through the 20 minutes. Eventually, we crossed paths again and at the end of my cool down I doubled back to pick him up on the trail.

It went ok. I did end up stopping twice. The first time was pretty early on when my shoelace untied. The second time was some point after the halfway mark. The cold air was really irritating my throat (and although I did not know it, I was harboring a return case of tonsilitis). It was messing with my breathing and swallowing and I got pretty nauseous, so I paused the program, pulled off to the side of the trail and dealt with it. Fortunately, there was a lull in traffic on the path, so I had some privacy, but it was pretty embarrassing.

However, I finished. Pretty strongly, if I do say so, myself. And Mr PugRunner did a great job on his set as well.

I really wanted to go back out on Saturday or Sunday to run it again, just to prove to myself that I could really own it, but it wasn’t a good idea physically, and I had to take a few days off to recover.

The Couch 2 5K app made some adjustments, so now it breaks down into distance and time for running portions and walking portions. 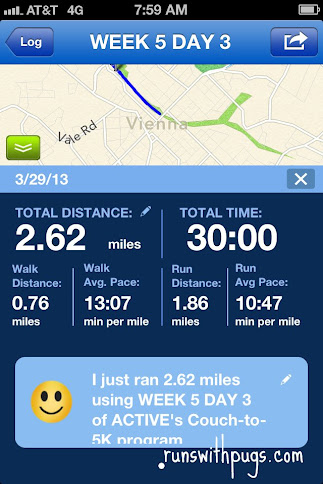 Today, I start Week 6. Which means I am officially more than halfway done with the nine week program. It kind of feels like it’s all gravy from here! I have so much adrenaline and I can’t wait to put it to good use!

I am not a doctor or medical professional, nor do I play one on the internet. This blog reflects my personal experiences on my own fitness and running journey, and the processes that work for me. Before you begin any exercise regiment, please consult your physician.
I am the luckiest. On #NationalSonsDay, I’m prou

Sunrise on the water and temperatures in the 60s?