This morning marks my last scheduled run before the race on Monday. The first day of Week 3 called for a steady 20 minute run, and I thought it would be a good idea to go for it, especially since I didn’t go out walking last night.

I decided that I would get up and out as early as I could to try to avoid some of the heat and sun. I was outside, ready to run, right before 7. It was actually a bit cool, but the humidity was still thick. I chose to focus on the beauty of the rising sun, instead.

My nerves are starting to unravel. My stomach is unsettled, and I was hyperaware of every jolt and movement today, from my toes to the fit of my sports bra. I keep trying to tell myself this is no big thing, it’s going to be just like any other day’s run, but the anxiety of the buildup and is getting to me. I have a bad feeling I’m not going to sleep a wink on Sunday night.

With all that said, I had a nice run. I kept thinking about how, in high school, I used to dread the steep walk up to the track for the days we had to run a mile. I always trailed the pack, and if I came in under 13 minutes, it was nothing short of a miracle. Now that 13 minute pace is closer to my walking speed and I would have no problem taking on those four loops around the track. 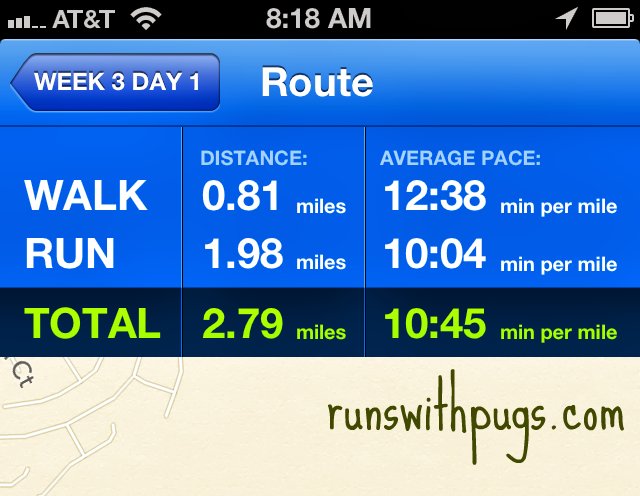 I got some great advice from readers about how to handle my workouts this weekend, and I think I’m just going to take it easy, relax and do a nice paced walk on Sunday to keep myself from tightening up. Thanks to everyone who weighed in on that. I appreciate the feedback.

I also have to take a moment to share how proud I am of Mr PugRunner. After we got started with the Couch 2 5K, I really got into the idea of running and racing, while he kept to a more conservative approach. He had told me that he he definitely wasn’t running any marathons, and wasn’t even sure he wanted to branch out beyond the 5K itself. I signed up for several longer races on my own, with the understanding that he had different goals than me, and was just proud of him for committing to a regular activity. Well, he graduated from C25K about a week after I did, and a few days later, he asked me what app I was using as my next step. So now, Mr. PugRunner has started HIS 10K training. I don’t know if I’m going to get him to sign up for any of the bigger races I’m excited about, but it’s a start!

Do you run with your spouse/partner/good friend? Do you train together or separately because of schedules? Do you run the same races?