Just last weekend, in a galaxy not so far away… Star Wars Weekends!

Normally, when we go to Disney, we don’t have much of a schedule. We may decide on a park or a restaurant, and I do really prefer to arrive at park opening, or rope drop, since we can get so much done before the bulk of the crowds arrive, but unless there is something specific we want to do (Toy Story Midway Mania, anyone?), we just kind of wing it.

Star Wars Weekends are a different animal, though. With so many people flocking to Disney’s Hollywood Studios for the limited time event, it’s important to have a game plan. There are so many things to do and see, and just not enough time.

I took to the internet, hitting up Disney message boards and forums, to formulate a strategy for our time in the parks. I had maps, show schedules, time frames and contingency plans. Mr PugRunner, who is far more spontaneous and laid back about vacations than I will ever hope to be, was alarmed, but I promised him that this would not be our normal plan of attack for the parks. Just this one time. To save us from frustration and unnecessary time wasting in an attempt to fit it all in.

With so many options, the best idea was to prioritize. We knew little man would love Jedi Training Academy, the special Star Wars themed parade, and meeting some of his favorite characters, such as Darth Vader and Boba Fett (who is one of my favorites as well). If we could manage those things, we would call the trip a raging success and the rest would be gravy. Extra bonuses would be seeing the Hyperspace Hoopla (a dance off between the Rebels and the Dark Side), visiting the Darth Mall shopping experience, and meeting Mickey and the gang dressed in Star Wars gear. We were not really interested in celebrity autographs (which would mean, in some cases, camping out in a line overnight to get a wristband and fastpass for an autograph time. It would have been neat to meet Billy Dee Williams, but not enough to spend the night sitting on the pavement).

We arrived at the Hilton Bonnet Creek on Thursday afternoon, one day later than planned, because of Tropical Storm Andrea. We tried to get to bed at a reasonable hour because we needed to be at the turnstiles of DHS no later than 6:45 AM. Insanity. The thing is, for some reason, even though Hollywood Studios technically opens at 8:00 AM, they do a soft opening a little earlier. On regular days, this can mean 7:30-7:45, but on Star Wars Weekends, they had been opening as early as 7:15, and being among the first in the park is critical when it comes to getting on character lines or a reasonable sign up time for Jedi Training.

The guys were super cooperative and we were the third family in line at the turnstiles we selected. True to precedent, the park opened at 7:30, and after a small hiccup with the families in front of us unable to get their tickets working, we were in.

A rope barricade was set up at the first major intersection on Hollywood Boulevard, where two storm troopers appeared on motorized pedestals. They engaged in a 5-6 minute “show”, which was pretty amusing. 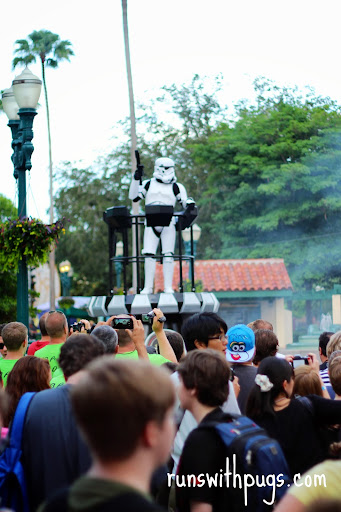 When they were finished, the main theme of the Star Wars soundtrack blasted through the speaker system (Goosebumps. Every time.) and Mr PugRunner and I parted ways: him to Jedi Training signups and me to get a FastPass for Toy Story Midway Mania.

I secured the tickets and then headed back around to the Indiana Jones theater to catch up with Mr PugRunner. He had managed to get a 9:20 training session, which was perfect. Little man wanted to go on Star Tours (3D? No, thank you!), so I pulled out my invaluable character schedule and prepared to hop in Darth Vader’s line.

However, I happened to turn and see Chewbacca, right across from Star Tours, and that line, which was reported to be long, was only about 20 deep, so I went there instead. Chewie rocked. He was so sweet and engaging.

I mean seriously. What a sweet wookiee. He gave us all our own giant bear hugs. Or would it be wookiee hugs? Hmmm. 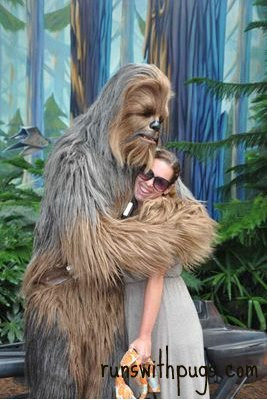 At that point, it was time to report to Jedi Training, so I broke off to get a good photography position at the stage, while Mr PugRunner escorted little man to his class. This was the second time that little man has had the chance to participate and it was cool that he got a different Jedi master than last time. He had a blast and we were so proud of our little Padawan.

After the show, the plan was to head back to Hollywood Boulevard to try to get a decent spot for the parade starting at 11:00. People start staking their spots (on the shady side of the street) at around 9:30 and there was nothing left on the curb. The boys headed off for a snack and I claimed a location behind the first row of spectators, leaning up against a tree. There was about 18″ of room between the two couples in front of me on the curb. I hoped that if no one came, and everyone stood up, little man might be able to still have a good vantage point in that spot.

When the boys returned, we started chatting with one of the couples. Little man, obviously bored with the whole waiting thing, helped himself to that 18″ of curbside property. I immediately apologized and assured the husband of the couple that I would have him move when the parade started. He laughed, commended little man’s go-getter personality, said he was welcome to the spot, and we had a lovely rest of time waiting for the parade to start.

It was a must-see and so worth the hour we spent sitting.

Then it was time to wander. We hoped to use the rest of the day meeting characters, enjoying our lunch and staying into the evening, so we could be home early on Sunday. We enjoyed another ride on Star Tours, and then wandering through the Streets of New York, where we ran into a small squad of Clone Troopers. 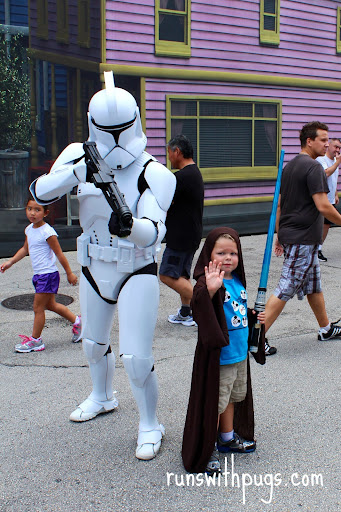 Little man was also happy to pose with this Clone Wars rendition of Obi-Wan Kenobi. Which was fine by me. No line. 🙂

We had lunch and then, finally, got on line to see Darth Vader.  Our luck had run out, however, because right when we were about 15 families away, storm clouds rolled in. The cast member escorting Vader reminded us several times that if it started lightning, the dark lord would have to leave the area, and it did. The queue had been undercover in the backlot area, so we were able to comfortably wait to see if the storm would clear. When it didn’t, Mr PugRunner went to the nearby shop to get ponchos (we had left ours at home by accident), and we slogged back to the car.

Later, we learned that the Hyperspace Hoopla had been canceled due to the inclement weather, so at least we made the right decision in getting back to the hotel and resting. It would have been fun to see, but there will be other years.

On Sunday morning, we were back at it. We arrived a little later, and headed directly to the Fetts’ line, which was near Darth Vader. Jango and Boba were scheduled to make appearances at the same spot, alternating every 30 minutes or so. There were no promises as to who we would see, but we were hoping for Boba. Little man even had a new Boba Fett blaster he wanted autographed. Things looked good when Jango Fett cut right in front of me on his way to take his break.

The whole family got in on the Boba Fett photo.

And little man got his blaster signed. Could he be any happier?

Mr PugRunner took little man on the Backlot Tour ride while I hopped on the queue for Darth Vader again. It was about an hour wait, but it was shaded,and I didn’t mind. Lord Vader was awesome and menacing and signed little man’s light saber, which was so cool.

And then we were done. This had to be, hands down, one of my favorite Disney trips ever. I can’t wait to go back next year.

Are you a huge Star Wars fan? Want to meet Boba Fett and his buddies? Here are my tips for a great time.

The early bird gets the worm. There was a huge difference in crowds between our two days, just based on our different arrival times.  While I wouldn’t have forced everyone to do 6:30 AM mornings, there was so much less stress on Saturday when we were there at that time. The park felt almost empty until about 10:30 and we had about three hours of pretty open walkways and short lines for the things we did. I know getting up and out before the sunrise is brutal on vacation, especially if you have children, but you’ll thank me for it.

Have a game plan. Maps, character locators and tips show up on the internet quickly, especially in the weeks leading up to the event.. Familiarize yourself with where you want to go and who you want to see. It will help cut down on walking and lines. Celebrities will be announced a few months out as well, so keep an eye out. The celebrity meet and greets are serious business with fans camping out overnight, in some cases, to ensure they get face time with their favorite actor or personality.

Stay hydrated. Star Wars Weekends are typically the last two weeks in May and the first two weeks in June. It’s hot. Really hot. We brought bottles of water and Gatorade into the park with us in our backpack and made sure to keep drinking throughout the day. Sunscreen is a must, as well.

Make lunch reservations. There are several table-service restaurants in Disney’s Hollywood Studios. Reserve a table at one of them. With the heat and the crowds, it will be a nice break where you can sit down out of the sun, and take full advantage of the air conditioning. Use this time to rehydrate and decompress. It’s worth it. Keep an eye out for the announced time of the Motorcade. This year, it was at 11, so our 1:30 lunch reservation worked great. In years past, the parade was in early afternoon, so at 2:00 time might be better to give you a chance to claim your viewing spot and make it to your reservation on time.

Enjoy. Enjoy. Enjoy. This event is so much fun. The characters really take their roles to heart (Darth Maul was nothing short of menacing the few times we saw him). Wear your favorite Star Wars outfit or dress up in costume. Tons of guests do it and we saw some amazing commercial and home made costumes.

Are you a Star Wars fan? Have you been to Star Wars Weekends or a similar SW convention? What was your favorite memory?