You are here: Home / Uncategorized / are you ready for some football?

We are huge football fans round here. In the NFL, Mr PugRunner is a Jets fan (sigh), I am a Dolphins fan, and we agreed that little man will be raised as a Jaguars fan. It keeps Sundays somewhat civil.

For the past three years, we have attended the open-to-the-public training camps that the Jaguars host, enjoying the up-close look at the players, and appreciating the fan interaction afterwards. Owner Shad Khan and head coach Gus Bradley are going out of their way to create a great product and a great experience and I am super excited to see what the season brings.

All the camps were in the morning, so we ended up hitting Saturday’s and Sunday’s sessions. Warning: massive photo dump ahead.

Saturday. Was. Awful. It was so hot and so humid and practice ran a lot longer than it did last year. Poor little man was an absolute mess by the end (and I was right behind him).

We watched everything from the team walking in, to the warm ups and the stretches, to the drills and the scrimmages.

There were a few differences from the last few years that are worth noting. For one, the covered bleachers to the back of the practice area were not open as they had been in years past, which was kind of a bummer. It’s definitely nicer to watch from the shade. Additionally, this year they pumped in some pretty fun music through the speaker system which gave a much more fun atmosphere.

As practice started to wind down, we headed out to the barricades leading from the practice field to the stadium to wait for players. Dark clouds rolled in, threatening a nasty storm, but the sudden drop of temperature was heavenly. When we had walked in, we had been handed green lanyards from some Publix representatives – the first 750 fans received one in honor of the announcement that Publix would be the Official Supermarket of the Jacksonville Jaguars. To celebrate, the lanyard-bearing fans were invited to a delicious tailgate after practice. Publix had set up a huge tent, and was serving all kind of delicious foods: chicken tenders, fried chicken, potato salad, shrimp gazpacho, ramen salad, pork sliders and little desserts.

I offered to hold our spot while the boys went to get some food. As as special gift, Publix gave away some really nice co-branded Jaguars t-shirts. Love swag. They came back with cold water and a delicious brownie bite, and then the players started walking back to the locker room.

It was kind of a slow autograph day. No one wanted to get caught in the storm, and the poor players were surely exhausted from a grueling practice in 90-something degree weather and high humidity. We did get to say hi to #51 Paul Posluzny (I was bummed that little man didn’t want to smile for a picture with him),

And #93 Tyson Alualu (that is just fun to say), who was awesome enough to come down the line for a few more autographs and high-fives, even though the coaches were herding them inside.

On Sunday morning, we headed back, this time arriving about an hour before the end of practice, rather than being there for the beginning. It was overcast and significantly cooler  so little man was in a much better mood (understandably).

We missed the stretching, but I was excited to see that the Jags were practicing in pads. That always makes things more exciting. 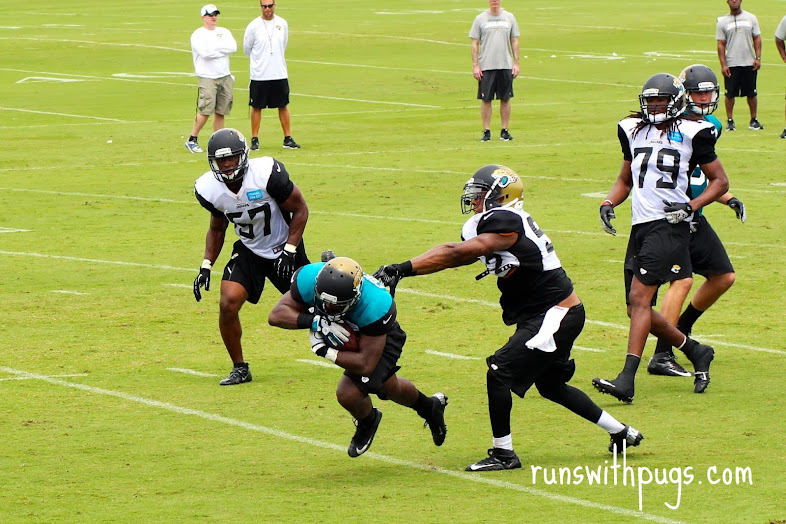 There were some real bright spots. The defense looked really good. Really good. And I loved watching wide receivers Cecil Shorts III and rookie Ace Sanders in action. They both have so much heart and are huge assets for the o-line. Of course, Josh Scobee, the kicker, and Bryan Anger, the punter, looked incredible. And the quarterbacks… Well… there’s still work to be done. Backup (and former Dolphin!) Chad Henne and newcomer Matt Scott looked pretty solid, while I thought Blaine Gabbert seemed out of sync and Mike Kafka struggled. I’m hoping things improved throughout the week, especially knowing that Gabbert was injured at Monday’s practice.

The team worked hard and seemed to be in great spirits. I’m excited to see them in action on the field for real.

Once again, after practice we headed back down to the barricades.

Little man was a lot more chatty today, so we were able to exchange hellos with Gabbert and Henne, Anger, enormous rookie OT Luke Joeckel, Jeremy Mincey and Marcedes Lewis.

We got a photo with Ace Sanders, who is just as sweet as can be.

And then, out came little man’s favorite player: guard Uche Nwaneri. We had seen him briefly yesterday, but he wasn’t able to get over to us, and we were lucky to be able to come back out to try again. Little man had a #77 jersey that he wore pretty much every Sunday last season, but he had outgrown it and we were hoping that Uche would sign it. He did.

The Uche love started in 2011, when Mr PugRunner took little man to the stadium to pick up a particular shirt the Jaguars were selling. They happened to be leaving as the players were heading back to their cars after a practice and Mr PugRunner (who has the amazing skill of being able to approach pretty much anyone), walked right up to Uche and asked him for a picture. Uche was so gracious and obliged, and little man was a fan for life. He was even taped for a sports segment on our local news while he was wearing his #77 jersey, which was really cool. I’m excited to get the jersey framed for him with a collage of these pictures through the years. I love that we have one for every year since we’ve started attending practices and games.

Preseason starts this weekend, and I’m a little sad that we won’t be at the game, but I’m hoping we’ll make up for it during regular season.

Are you ready for football season?

What’s your favorite NFL team? How about in the NCAA?

Is there a player you just absolutely adore?