I was so excited for this particular race. Not only was it going to be a comeback run for me, but the venue was at Everbank Field, home of the Jacksonville Jaguars. I was really digging the idea of a lap around the official football field before crossing the finish line.

I chose my outfit with teal and black in mind.

I went with the pink Mizunos. They just had to be worn.

We arrived early on Friday night, at about 5:15, because we had to get little man signed up for the 6:00 Fun Run. The registration portion of the race was not super organized. There was no information about the Fun Run – no spot for registration on the online form and when I went to pick up my and Mr PugRunner’s race packets, the employees weren’t able to shed any light on it. We finally got word that we could register little man at the venue, which was great. However, it was $30 to get him in. Annoying because had we known, we would have signed him up earlier for a lower price. On the plus side, the fee entitled him to a race shirt (cotton, not tech) and a finisher medal. But, we were there and he was excited to race, so I guess no harm done.

According to one of the volunteers, there were about 1400 people registered. However, it wasn’t at all busy and I attribute that to the fact that there were seven races: a fun run, a 5K walk/run, a high school boys’ 5K, a high school girls’ 5K, two regular 5Ks (one at twilight and one under the stadium lights), and a competitive 5K between the two. Mr PugRunner wanted the stadium lights experience, so we were in the last wave of the evening at 8:30 PM.

We walked around and checked out the field. 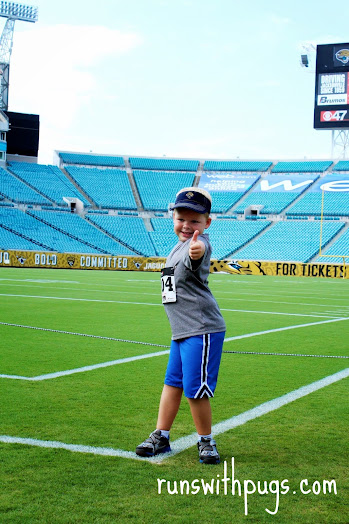 Little man was so ready.

We also got to watch the end of the setup, which was cool. 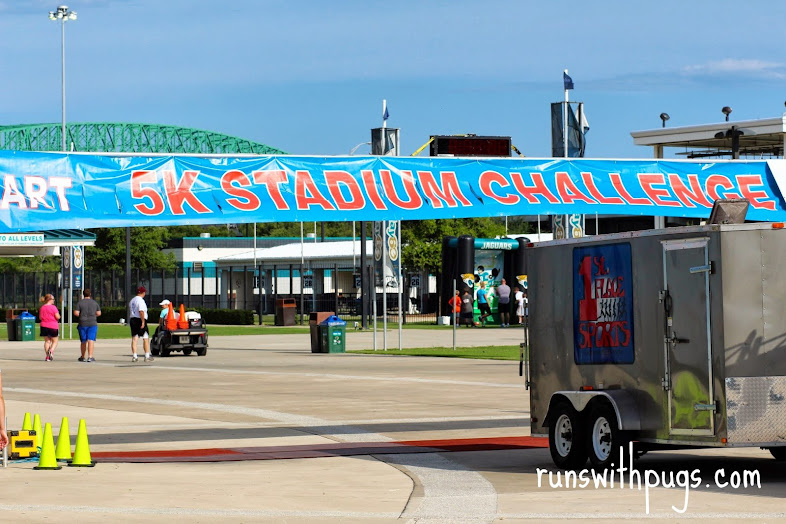 Getting the bananas and water ready for the runners.

This kid LOVES Speedy Banana. He wanted a picture with her in the worst way. 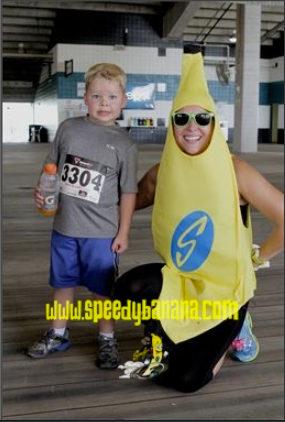 We also got a shot of the whole family. 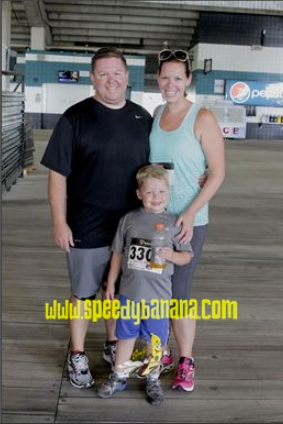 Finally, 6 PM arrived and it was time for little man to line up. We had brought our friend and his babysitter along with us so someone would be able to watch him while we did our wave. She is also a runner and said that if he wanted, she would go with him, so she could get a little run in, herself. Little man was stoked. They mugged for the photographers at the start line a little, then the gun sounded and they were off!

When the runners disappeared around the side of the stadium, we headed over to the finish line to wait. And wait. And wait. As 10 minutes ticked past on the clock, the announcer admitted that perhaps the course was a bit longer than a mile. When the young man above busted over the finish line, they decided it was probably more in the 1.5 mile range. Oops.

Other kids crossed the line and Mr PugRunner and I were starting to get worried, when Mr. PugRunner caught sight of our guys.

“Little man is getting a piggyback ride,” he said. 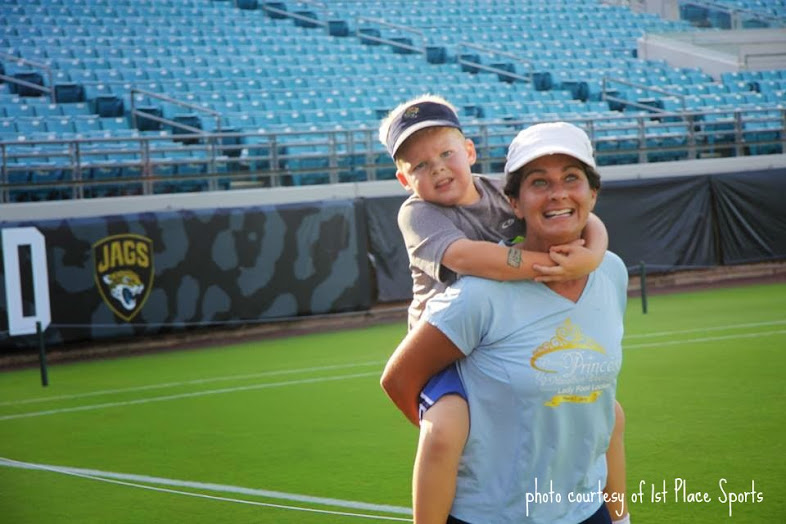 I guess with the extra distance, the blazing sun, and two sets of stadium ramps (Up six to the top, down two, up two, down six to the field. Seriously? Those ramps were intimidating for adults, let alone kids as young as four), little man had tuckered out. From photos I saw later, he wasn’t the only one to hitch a ride, and he did get down to cross the finish on his own. J said he did about half, which is fair. It was a long run.

We didn’t end up getting him a chip (although we could have), so I have no idea how long it took, but all the credit in the world to J for carrying him part of the way. She didn’t get a medal, because she wasn’t officially registered, but we couldn’t let her accomplishment go un-blinged.

It was a good run, although a little long and a little intense with the ramps for the younger kids. It would be nice if they tweaked that for next year.

Stay tuned for part two: the recap of the 5K under the Stadium Lights!