The truth? I was really disappointed that I didn’t get to compete in Monday’s race. I liked the distance (3.5 miles up from the usual 5K), the sentiment (an anniversary), the location (nice and flat) and the medal.

My consolation prize was entering and running Will Run For Bling’s Hangover Run Virtual 10K (and the medal for that should be coming in the next two weeks!), so this time was about Mr PugRunner and little man.

We arrived at the staging area at about 7:00 AM for a 7:30 gun time, and found close parking relatively quickly. We had picked up the packets for Mr PugRunner and little man the day before, so all Mr PugRunner had to do was claim his chip, secure his bib and hit the restrooms. The start line and surrounding area was pretty crowded, but we did manage to bump into our friends: Kristin from A Mom on the Run and her family. She was going to be running in the main race like Mr PugRunner, and then we would take the kids out for the one mile fun run.

As everyone got organized, little man caught sight of Speedy Banana. He LOVES that running banana, and she was kind enough to oblige him for pictures.

After the National Anthem, the runners were called to line up

and Mr. AMOTR and I herded the kids across the parking lot to the finish line, which was fortunately positioned in the shade. I didn’t get a temperature reading, but it was pretty hot and humid.

The boys had a pretty good time cheering on the finishers as they came down the final stretch, but of course, little man was waiting for his daddy, and his friend B was looking for his mommy. Before long, Kristin came running down the line, followed about ten minutes later by Mr PugRunner.

We were all so proud of both of them. The heat was definitely a factor. The majority of the run was on the pavement in the blazing sun, and there was not a cloud in the sky. That will slow anyone down.

There were water stops along the course, and in the finisher’s chute, finishers could grab water bottles from ice-filled tubs and bananas. I also saw some finishers walking around with jars of Biscoff, but not sure where that was.

Obligatory family photo. The orange was not planned.

While Mr PugRunner and Mr AMOTR took the bags and headed to drop some things off at the car, Kristin and I took the kids over to the fun run starting line. The course was an out and back with a little residential block thrown in. Most of it was shaded, and there were police officers at the major corners.

We all took turns running, walking and pushing the jogging stroller. The boys had a blast high-fiving some of the cops and volunteers along the route and just generally being silly and adorable. B’s sister M just enjoyed the ride. It’s good getting to kick back in the stroller.

After a drink break and some more stopping and going, we hit the final two turns before the finish line. The boys both took off!

I had to sprint a little to catch up with him, and for the first time, we crossed the finish line together. <3 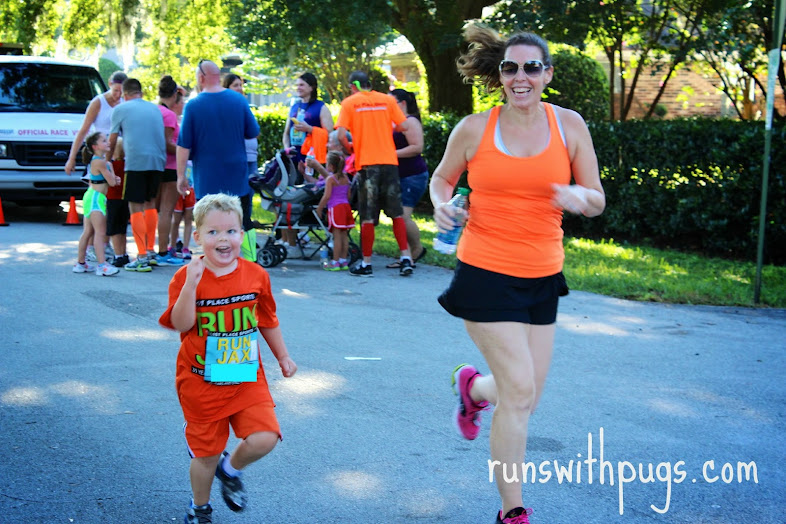 It was a fantastic feeling.

The boys were more than happy to show off their bling before settling down to some Gatorade and a snack.

While the announcers attempted to host their giveaways and post-race festivities, we made our way into the 1st Place Sports store – they were offering 35% off everything except electronics to runners, in honor of the 35th anniversary of the race. It was slammed, but we managed to maneuver through the crowds to select some items. We stocked up on Honeystinger chews and waffles, as well as some other kinds of fuel to try. And Kristin found me a pair of CEP compression calf sleeves.

And, then, finally, it was time to grab breakfast. Mr PugRunner was ravenous, and it had been HOURS ago that I had grabbed my banana. To celebrate, we went to Maple Street Biscuit Company for some delicious breakfast sandwiches and sausage gravy. As an added treat, we happened to grab a seat at the same table as the owner’s grandmother’s and aunt, and had the most lovely chat while waiting for our food.

We made it home before noon, and everyone showered and crashed for naps.

It was a wonderful way to spend the Labor Day holiday.

Do you stick around after races for the raffles, giveaways and post-race celebrations?

If you ran a race on Labor Day weekend, how was it?

I am not a doctor or medical professional, nor do I play one on the internet. This blog reflects my personal experiences on my own fitness and running journey, and the processes that work for me. Before you begin any exercise regiment, please consult your physician.
Blue skies and low humidity = the dream. Five mil

Sunrise on the water and temperatures in the 60s?

One of my favorite things to do is travel. There i