The alarm rang entirely too early on Saturday morning. I popped up at about 4:40 AM, after getting a whopping three hours of sleep.

Clearly, a nap would be in order.

We showered and dressed, and Mr PugRunner double checked to make sure he had everything he would need for the morning. We hopped in the car and stopped at the 7-11 for coffee and a light breakfast, and then headed over to Wide World of Sports to park and get ready.

Fortunately, we got great parking and were there in enough time to walk around and check things out. The weather was cool (to us), although still humid. I wandered around, taking some pictures and checking out the lay of the land, while Mr PugRunner stretched and hydrated. 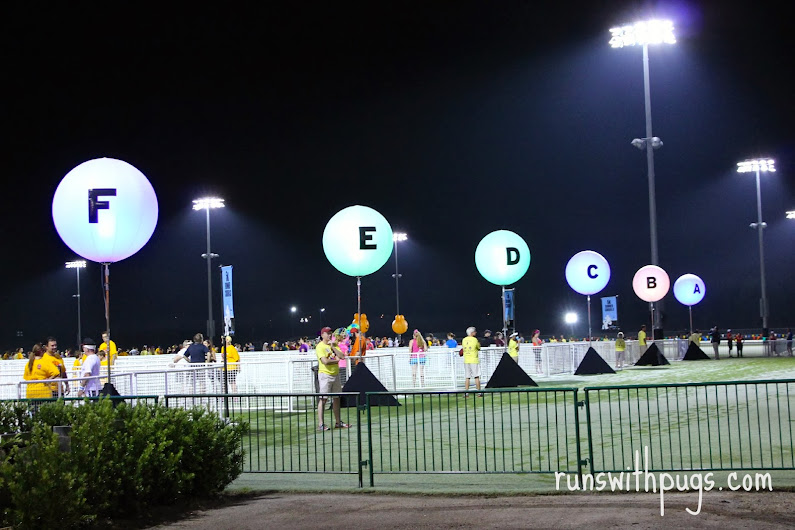 When it came time for him to load into his corral, I took a spot on the spectator bleachers at the finish line. He was ready. 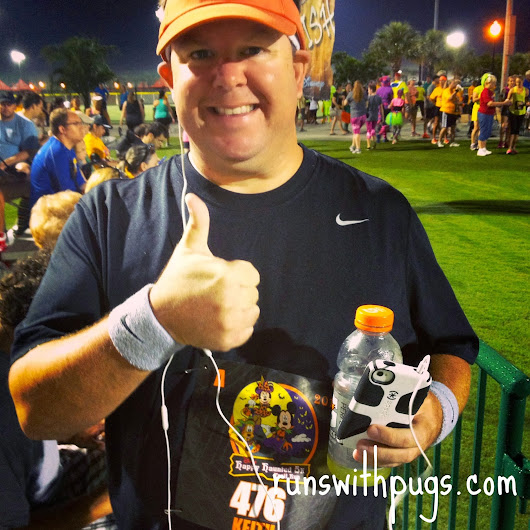 The sun came up, as with it, three brilliant hot air balloons glided over the top of the Jostens Center. It was incredible. I love hot air balloons, and it was great to get to photograph some while waiting for the runners.

There were also a couple of special guests at the finish line, including this guy, dancing along with the constant music and working as complements to the announcer. 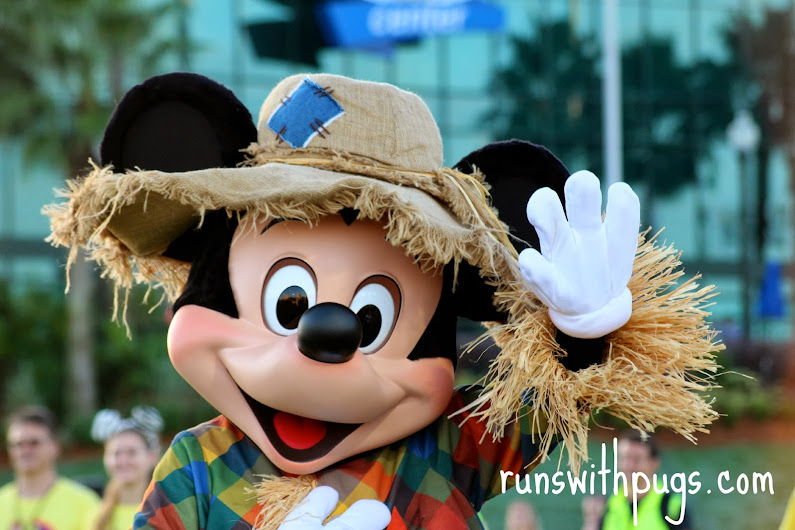 The course was labeled a trail, and included some different terrains, including gravel and grass. It was a slow cross, the first runner crossing the finish line in about 19:30. Once the sun came up, it became brutally hot, without a hint of wind, and I’m sure that contributed to it.

Mr PugRunner crossed the finish line in the zone.

Unfortunately, he jammed his back on a pothole on the course, and it took him a few minutes to walk it off and start feeling better. We got him to a nearby bench with some powerade and post-race snacks, just in time for little man and our firends to join us. 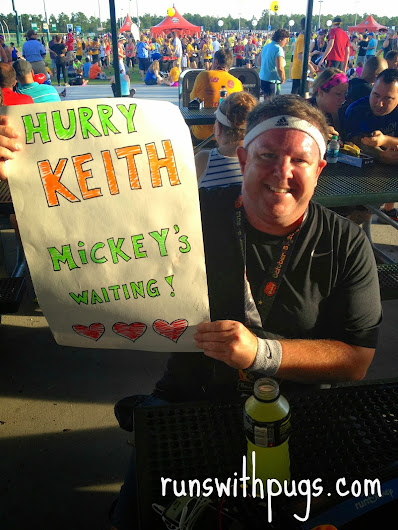 We enjoyed the shade, while the boys were entertained by a balloon guy – he made them aliens. On sticks. 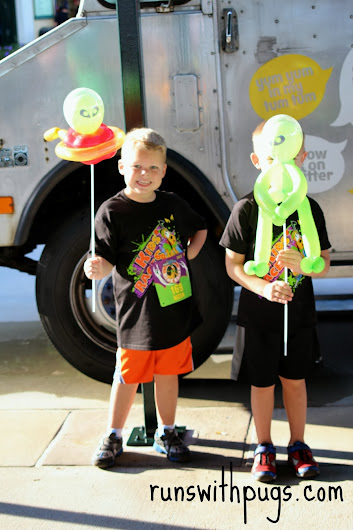 At 9:15, we made our way over to the track and found the starting line for the 200m race. The 100m group went off first, in several waves, and it was adorable to see the under-three crowd toddle along the length of the track, towards Pluto. 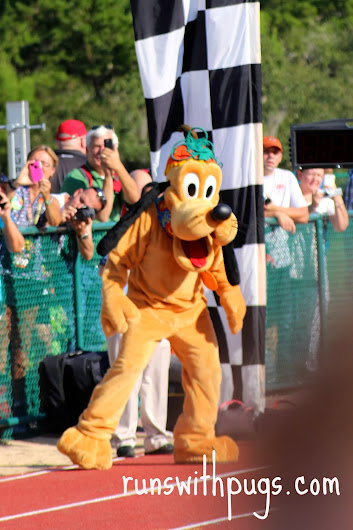 Finally, it was the boys’ turn. They were in the second wave of the 200m runners. I loved how runDisney sent off a batch at a time so the course wasn’t super crowded and all the kids had a chance to high-five Pluto at the end. Genius.

That’s K in the background. She had volunteered to keep them company during the run.

I may be biased, but these are two of the cutest runners ever. The were in love with their medals. 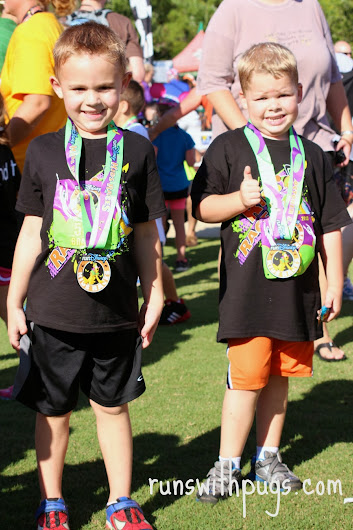 At this point, it was about 10:15, and I realized I was ravenous. Getting the right nutrition for a night race is a tricky thing, and we decided it would be best to head to Downtown Disney and get lunch, then head back to the hotel. My afternoon plan was to nap, while Mr PugRunner and K took the boys to the pool and A went to pick up his cousin for babysitting detail.

We bid Wide World of Sports a farewell, but not before snapping a quick family photo. 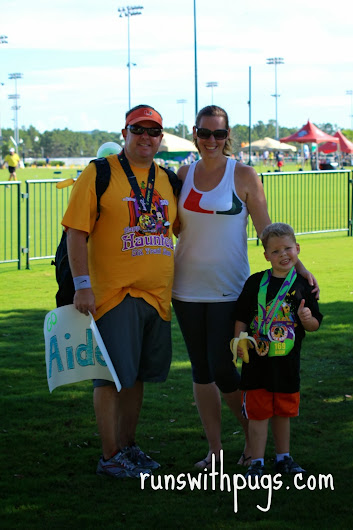 The restaurants in the Disney Marketplace didn’t start seating until 11:00, so we wandered around the LEGO store for a little while, before getting our table. Normally, I order the bruschetta, but it didn’t seem like a solid enough meal for the day, so I opted for the cheeseburger.

It was monstrous. And delicious.

And just like that, I hit my wall. I wanted nothing more than to crawl into bed and sleep. Luckily, I was able to do so, and got about 90 minutes of good nap, while everyone else was off doing their own things.

We picked up some fast food for the boys, A and myself for dinner. I really wanted a bagel, but there were none to be had, so I settled for some chicken nuggets at around 5:00. I figured that I could take a banana and a Luna bar to the staging area with me, and fuel as necessary.

The last thing I did before taking my shower was lay out my race outfit (and huge thanks to K for the loan of the skirt). 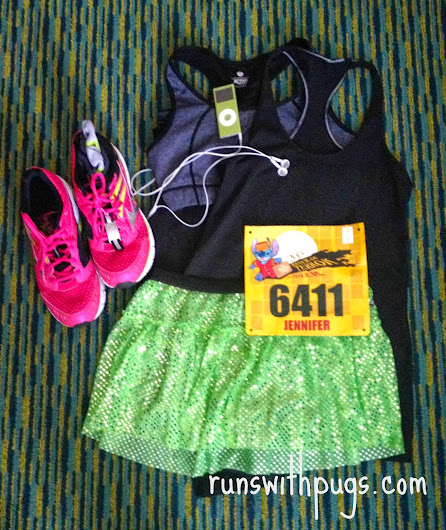 How do you fuel for a nighttime race?
Are you always able to get enough sleep before your race time?