Posted on December 5, 2013 by runswithpugs

then When the alarm rang at 4:00 AM on Sunday, I popped right up.

My stomach was feeling a little better, which was a huge relief. I gathered my clothes and treated myself to a lovely, scalding shower. The plan was to leave at 4:45, so Andrea and I checked our bags one last time and headed next door to get Kristin and Mr AMOTR, who was driving us to the starting line.

They weren’t quite ready, so we headed to the lobby to see if there was anything for breakfast. I had packed a granola bar, but Andrea was in search of a banana. The hotel’s complimentary continental breakfast buffet was not yet set up, so we asked at the front desk to see if they could help her out. Surprisingly, the agent there handed us some gift bags containing bottled water, a banana, a wrapped apple and a muffin. They were available for all the runners, and I thought it was a very nice touch. We got an extra bag for Kristin and we were ready to go.

After parking (pretty close to the start), we took it all in. The area was packed with shuttles, runners and spectators.

Yes, we matched. No, we didn’t plan it that way.

Kristin and Mr AMOTR were able to buy coffee from a sidewalk stand and we located the starting area. Half marathoners were supposed to start at 6:00 AM, and at 5:30, I decided to get on line for the bathroom.

Of course, five minutes later, announcements were made, asking the half marathoners to make their way to the line. Normally, that would have sent me scrambling to comply, but when you have to go, you have to go, and I decided to stick it out. We made it back to the line with maybe five minutes to go, which was probably for the best. We wished Kristin good luck (she was starting at 6:30) and found our pacing areas. Andrea lined up a little ahead of me. I found a spot between the 11:00 and 12:00 groups, and felt good there.

The National Anthem was sung (it was beautiful, but the audio kept cutting out), and then the big screen at the start line played a rocket launch, complete with countdown. When the blast off came, the gun sounded and we were off.

It was dark. Really dark.

We wound out of the downtown area and then back around to the main road where we would be completing our out-and-back. The course cut a line between the Indian River and some of the most beautiful homes I have ever seen, overhung with old, gorgeous trees, thick with Spanish moss. I wish I stopped for a picture, but the sky was so overcast and cloudy and I just couldn’t find an opportune moment.

The temperature was fine (high 50s, low 60s when we started), the predicted rain showers were holding off and the sun was held at bay by dark clouds. It would have been nice to see the sun rise over the river, but in retrospect, I’m glad that the clouds provided shade for the duration. The only big weather complaint was some nasty wind. It didn’t turn out to be an issue for me, which was surprising, but I think I was distracted by other things.

Normally, I start my intervals pretty much right off the bat, but going for it worked well for me at my last 10K, so I ignored my Garmin for a little while. I managed a mile and a half before the crowd thinned a little and it felt like time to settle into my 2:00/1:00 routine. It coincided nicely with the first aid stop – water, gatorade and portapotties.

I skipped the first two or three aid stations – I don’t really ever need or want a drink before that point, and while I have no reservations about using a portapotty, I didn’t want to lose the time if I didn’t have to.

By this time, it was pretty much daylight, and I was in a groove, so I was able to look around. As I mentioned earlier, the course was beautiful. The road we were on was narrow (one lane going, one lane coming), which would come into play later, but the pavement was relatively  even and flat (there were a few inclines and downgrades, but nothing too taxing). What I did notice was that so many of the residents were out, holding signs, cheering and generally enjoying the morning. Some were tailgating and offering refreshment to the runners, and others were just yelling and ringing cowbells for support. This is the first race I’ve run with such an incredible spectator turnout and I loved it.

I was probably at mile 3.5-4 when the lead runners were looping back and starting to pass us. At this point, things got a little tight, because we had to stay to our side of the double yellow line while they stayed on theirs. I got stuck behind the 2:30 Galloway pacing sign, which I think was kind of a good thing. I wasn’t intending to run with a pacing group at all (mostly because I was intimidated), but I was there and really couldn’t get around them, so I figured I would see where it led me.

The answer was up to mile 8 or so. Their intervals were a little longer than mine (I think either 2:30/1:00 or 3:00/1:00), but I was feeling good, so I went with it. I was starting to get a little excited at the prospect of possibly finishing in about two hours and thirty minutes, which was the long shot of my goals. We made the turnaround (which I hated because there was a volunteer in an astronaut jumpsuit spraying the runners with water, although I did manage to avoid a dousing), and it was time to head back.

I was alternating water and gatorade at the stops, now. I wasn’t thirsty but I did need the extra boosts, and I started in on a combination of pomegrante honey stinger chews and chocolate honey stinger waffle. I was walking through the water stops, while the pace group kept right on running, so I decided to let them go and continue on my own, rather than worry about making a crazy sprint to catch up. It was fine. They had gotten me so far and I was feeling great.

And then it started happening. A twinge in my right calf. Followed by a twinge in my left calf. I think I was at mile 9 or so. I kept going, kept up with the Gatorade, and hoped it would subside.

I tried to focus on the ambiance and the excitement around me. We were on the river side of the course now, and it was so beautiful to see the boats on the water. The spectators had ramped up the enthusiasm and were standing out with boxes of Krispy Kreme donuts, bowls of M&Ms, platters of fruit and other treats. I loved the idea but I was so afraid to try anything because I had no idea how my tummy would react. There were some people in costume and almost everyone had some kind of sign. But it wasn’t helping.

On the other side of the road, the lead marathoners were starting to come through with some of the half marathoners and I used that to drive me. Even more inspiring? A woman walking with a half bib, led by a friend and her service dog. I tried very hard to stop feeling sorry for myself and the cramps and kept pushing.

I pulled off the course a few times to stretch and to rub the muscles. It seemed that only made things worse. I made it to what was either the last or second to last aid station, got a cup of Gatorade and got out of the way of the runners. The volunteer handing out Gatorade must have noticed that I was about to burst into tears and asked me if I was cramping. I said yes and he told me to just take a few minutes to rest and to have a few cups of Gatorade while I was doing it. He was so sweet. I didn’t linger long – I knew that if I took a really hard stop, I wasn’t going to want to keep going and I was so close to the end.

I was a little down on myself because I knew the 2:30 goal was shot to hell, but the 2:45 pace group still hadn’t caught up with me. With that in the back of my mind, I tossed my empty cup and dug in. This was it. I had come way too far to fail and I was going to get to the end of this race, one way or the other.

To be honest, I don’t want to know what my splits looked like for the last mile and a half. I had stopped paying attention to my intervals, running when I could and walking when I couldn’t. I fell in next to a woman who was wearing a tag for the 2:15 pace group and I joked that I was going to pretend we were at that pace. She laughed and told me that she was running a full marathon next weekend and needed to drop off to save herself for that challenge. We stuck together for a little while and then I was able to take off again for a little more running.

The end was close. Volunteers started promising that there was a half mile to go, and oh, it was the longest half mile of my life. I high fived a Star Wars Angry Bird and a Darth Vader and just kept going. My legs were really hurting, but I was doing my best not to show it. The course rounded a couple of turns and we were approaching the finish line. I ran along a sidewalk, and was about to open up to run, when I saw that the walkway was paved in brick and also went in a semi circle. Mr PugRunner had texted me and said they were on the left with a red sign. I pushed as hard as I could, kind of sad that I didn’t see them, and then there they were, with another friend. Little man was waving the sign and I knew that in just a few more seconds I would be able to stop. I waved and smiled and ran as hard as I could for the finish, with a big-ass grin on my face. 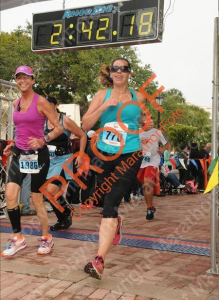 I hobbled through the finisher’s chute, collecting my medal and my towel, trying not to cry.

Andrea came and found me. She asked if I was crying because I was happy or because I was hurting and quite frankly, I had no idea. It was probably a combination of all the things.

And then Mr PugRunner and little man were there with our friend, and there were so many hugs, even though I was a disgusting, sweaty mess, but OMG. I had done it. I had run 13.1 miles and finished upright. Holy. Crap.

And this beauty? This was all mine.

Tomorrow, I’ll post about the after-race party and my overall thoughts on the whole experience.

Thank you to everyone for all the support and encouragement on this leg of my running journey. I don’t think I could have done it without you.