Read about my first half marathon race experience here.

So, instead, we posed for a picture with our medals. 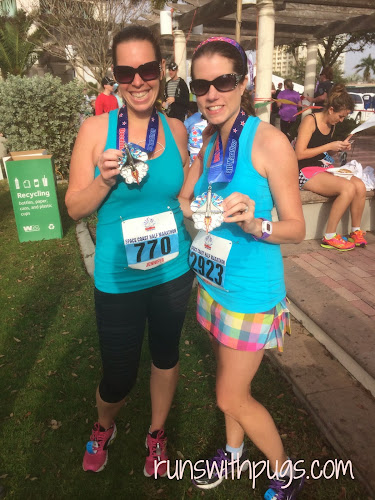 Once I got myself together a little, I was able to look around and take everything in. The post-race party was incredible. It was in a circular, grassy field, surrounded by a brick-paved path (that was doubling as the course) and with a clear, beautiful view of the river. Music was cranking and there were several stations set up with all kinds of food and drink.

For whatever reason, I wasn’t all about wandering.

I had my eye on the pancake tent.

Volunteers were cheerfully churning out trays and trays of pancakes and scrambled eggs. I couldn’t stomach the eggs, but I did snag a plate of fluffy, buttermilk goodness, smothered in butter and syrup.

Mr PugRunner went off and snagged a couple of sodas for me and Andrea, and at that moment, happiness was mine.

We settled in to wait for Kristin. She was keeping us abreast of her progress via text, so we were able to gauge when to hop to the finish line to watch for her. In the meantime, we were joined by friends who had just finished the marathon, and a friend who lived locally and wanted to give her support. It was so cool to have so many familiar faces around us even though we were a distance from home.

Oh, and remember Ashley, who I met up with at the St. Augustine 10K? Well, she was also out there, running her first marathon and her husband met up with us while we were waiting. Andrea had a gift from the expo for her, and they had the Moon Pies from the expo that we never saw. It was an excellent trade. We didn’t get to see her cross the finish line, but I know she did an amazing job.

It was so exciting to see Kristin run in. She looked super strong and happy, and we were so proud of her! She’s worked so hard and her training really paid off. It almost makes me want to try for a marathon of my own. Almost. Maybe. We’ll see.

Reunited at the post-race festivities.

We spent some more time hanging out, but little man was starting to get tired. He had been up since 4:30 and it was a long day for him. We got ourselves together for one more picture with the official race backdrop. 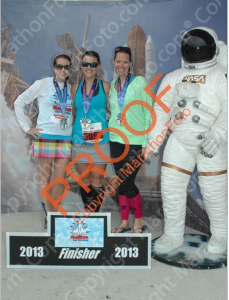 Kristin, Mr AMOTR and their friends were heading out to lunch, so we said our goodbyes and  took Andrea back to the hotel to collect our things. I desperately needed a shower, and something to eat.

Our timing was off. The annual Toys for Tots motorcycle caravan was going on and while I thought they were just closing the exits on the interstate for the duration,  they, in fact shut down the road to our hotel. So that was pretty frustrating. We waited for about 40 minutes before we were released and able to complete our journey.

That shower was the best ever. We left the room and decided to wait to eat lunch until little man woke up from his nap (fortunately, that happened to be right around where Red Robin was located, so yay for a delicious burger).

Other than some twinges in my calves, I was feeling really good. I had to wear compression sleeves on my legs for a few days, but that was a small price to pay for the great feeling of accomplishment I had.

I already planned to run the Space Coast Marathon (half) for the next four years to keep up with the medal series, but after Sunday, I am even more excited about that plan. I loved this race. I loved the volunteers and the course support and the spectators. I loved the other runners and the course. I loved watching a blind marathoner cross the finish line with his running partner, and I loved watching volunteers escort the injured in for their medal. I was so inspired by so many people on Sunday, and that’s a feeling I will carry with me always.

I haven’t run a step since Sunday. Part of it is Oscar. The other part is post-race blues. I have a 5K tomorrow afternoon, and I hope I’m in decent shape for it. This is really the first time since I’ve started running that I haven’t been worried about slacking. For some reason, once you’ve proven to yourself that you can run 13.1 miles, the rest falls into place.

Oh, and even though I had an automatic PR because this was my first half, I am pretty damn proud of my finishing time. 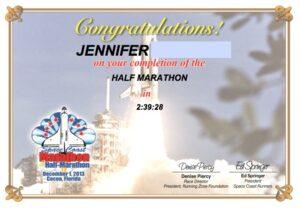 My vacation from running ends tomorrow, and then it’s time to get serious for ZOOMA Florida in January.

Do you get post-race blues? How do you combat them?