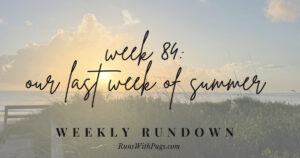 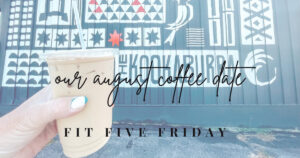 Finally, it was race day. Time for the DONNA 5K.

I got a decent night’s sleep. Not as long as I would have liked, but I was ok.  I showered and dressed in my gear, before letting the pugs out and feeding them and double-checking to make sure my race bag was packed and that little man had all his things for his football game. I was going to drop him off at the sitter’s in his PJs at 7:00 – she planned to fed him a pancake breakfast and then take him over to the field. I would meet them either at the game, or at her house afterwards, depending on how quickly I finished.

After some quick last-minute instructions, a big hug and kiss, and tons of thank yous, I was on my way. I had a banana and water in the car, to follow up the banana I ate at home, and I was glad that the weather was cloudy (though humid) and traffic was clear.

I was a little stressed driving into downtown. Finding parking throws me into a tailspin. There was a free lot near the convention center, but I wasn’t sure precisely where. I knew there were a few cash lots, so I had tucked some money into my Armpocket, just in case. I am much happier just paying for parking, than stressing about it, especially right before a race. I turned into a lot too soon, and ended up having to pay, but it was ok. I was close to the start line and knew where I was. Five dollars well spent.

I laced up my shoes and then set out to meet up with my friend S, and her friend (also S). It was nice to see them, and we decided to check out the convention center to see if there were real restrooms open, since they had packet pickup up and running. Lines were reasonable, and it was nice to not have to use a portapotty.

We lingered near packet pickup for a while, because it was still pretty chilly out. I ate my granola bar and adjusted my laces for the millionth time. For some reason, they just weren’t working out over my right arch. Annoying. When the other runners started moving outside, we followed suit. I was feeling great. Nice, and relaxed, and ready to go.

The scene at the start line was pretty incredible. There were a bunch of vendors set up, handing out samples and food. It was too early to have anything more than what I had already eaten, but it was nice. We didn’t have time to really look around, because it was crowded and Donna Deegan was giving a speech onstage.

Powerful and moving. It was such an inspiring way to start the morning.

We kept moving to take our places in the start line. There were going to be two starts, within five minutes of each other. I positioned myself near the back of the first wave. I was pretty sure I would be able to keep pace.

After the National Anthem sounded, we were off.

Here’s a look at the course.

It was lovely. There were two big ramps/bridges – one at the start and one towards the finish, which were unexpected, but I didn’t really mind. The views were lovely. I wish that I had my phone out so I could snap a few quick pictures during my walk breaks, but it was stowed in its band, and the effort to pull it out seemed counterintuitive. I resolved to come back and run the route at another time. I loved seeing the city skyline over the river, with the sun peeking through the clouds and fog. I don’t get much city running in my training and it was something new.

I felt good. Maybe even great. My heel was a little twinge-y, but I don’t think it was affecting anything (we’ll discuss this more tomorrow). The course wasn’t congested and I felt like I was making good time. There was a water stop somewhere in the second mile. I thought I grabbed gatorade, but somehow I ended up with water. This was not so good. I only had a couple of slow sips to wet my mouth a little, but it hit my stomach hard.  Blah. I ignored it and pushed on.

The last downhill was a fun, twisty corkscrew, which dumped out on the street. There was one more turn and then the finish line was in my sights.

My stomach was in absolute protest, but I saw my friends on the sideline and all the spectators cheering for everyone still running, and I couldn’t stop. I kicked it up as much as I could, and crossed the finish. 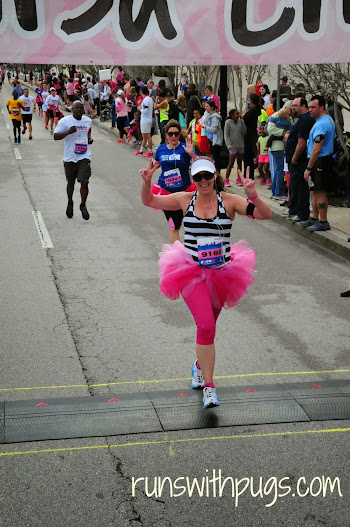 I moved quickly through the medal distributors to get out of the way, and then squatted down by the barricades, to give my nausea a chance to pass. It only took a few minutes, and then I was able to go and rejoin the other ladies.

I didn’t get my PR. However, my post-surgery 5K time was over 37:00 and this time was just over 34:00 so I shaved three minutes off that. I call that progress.

The race was amazing. So much raw emotion and positivity all around. The crowd support was amazing, and the volunteers were friendly and encouraging. I loved every minute of it, and I hope to be back for many years to come.

Thank you to all who made this an outstanding race and event!

(If you didn’t get to run this year (or even if you did, and are excited to run again in 2015), registration is open for  the full and half marathon next year (other events will be open soon). Also, donations are still being accepted through March 31. If you’d like to contribute to help finish breast cancer, with funds going to the Donna Foundation and to the Mayo Clinic, you can do so here. It’s a wonderful cause and support is appreciated.)

This morning’s activities are courtesy of an ear