We are fortunate enough to live in an area where trips to Orlando, and its plethora of theme parks, are fairly easy. For the past two years, we have had annual passes to Walt Disney World, and it’s been great. However, before the start of kindergarten, we were able to go down on a whim, avoiding busy seasons and weekends. There were times when the parks were close to empty and it was wonderful. We were able to meet family at the parks in the summer or just go on little, mini getaways, and the passes definitely paid for themselves.

Things kind of changed a bit this year. With little man’s school and sports schedules, as well as our own race calendar and training, it’s been difficult to fit in trips. Add to that the new Magic Bands and Fast Pass +, and the seemingly increasing crowds at what have traditionally been slower times, we’ve been thinking it’s time for a change.

Our last trip to WDW was after the new year, so we could check out the Osborne Family Spectacle of Dancing Lights. We stayed on site at Pop Century (rooms are super-small, but clean) so that we could get our Magic Bands and prebook our three Fast Pass + attractions per day (at one park per day). It was a fun trip, because family trips are always fun. 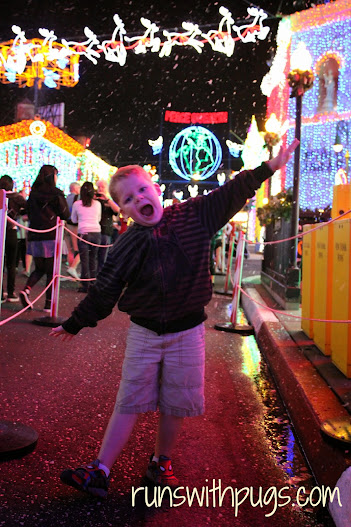 But it was a lot of work. While I am a planner and I love the idea of having an agenda laid out, I felt like I was constantly checking the time so we didn’t miss any of our fast pass or dining reservations, and standby lines for even non-headline rides were ridiculously long. I also disliked being locked into rides or restaurants weeks and months before we even set foot on Main Street USA.

It just wasn’t quite what it used to be.

So, we started looking at our options to see if we could take advantage of some of the other Orlando offerings. Mr PugRunner and I are both huge Universal Studios lovers but we never thought it was worth it to take little man because he wasn’t tall enough for a lot of rides. He has been growing though, and now, he is only too short for some of the more intense thrill rides, so we thought maybe we would give it a try.

On Saturday morning, I had planned a departure time of 7:00 AM. For some reason, I thought we were about an hour away, and I wanted to be able to get parked, get ourselves situated and be in the park right at the 9:00 AM opening. The GPS crushed that thought when it announced we had a two hour drive ahead of us. Ugh! However, we grabbed muffins from the complimentary breakfast buffet at the hotel we had spent the previous two nights, and loaded up the car.

Even more of a surprise than taking little man to Universal (he had no idea!) was that we were taking his cousin T too! So much excitement!

The ride up I4 was surprisingly easy. We made it to the Universal parking garage (amid happy cheers from the backseat) at a little after 9:00 AM, and I decided to pay for the closer parking option because we still had to walk to the entrance, turn in our ticket vouchers and purchase another ticket for T before we got through the turnstiles.

While I was worried about it being a Saturday and Sunday during prime Spring Break weeks, I had decided to forego the Express Pass (which is basically an added value ticket that provides front of the line access to most attractions). For one thing, the EPs are based on a sliding scale depending on anticipated crowds and they were currently priced at about $50 per person per ticket. We could upgrade at any point throughout the day at any number of locations inside the park, so we could always adjust if needed.

It’s been about 10 years since my last trip to the park, so it took a little time to get acclimated. We bypassed Minion Mayhem because the wait was about 40 minutes (it seems that everyone who enters the park hops into line for that attraction as it is right on the main thoroughfare). We veered right and queued for Shrek 4D. Little man didn’t care for it at all. He thought the intro was spooky and the movie too intense. I thought the trip was doomed, but when we got back outside and he saw Shrek in the flesh, well… I’ll let you be the judge.

We moved on and couldn’t believe our eyes when we saw a life-size, fully functioning Bumblebee! The technology was ridiculously impressive! Next time, I’m hopping in the picture. 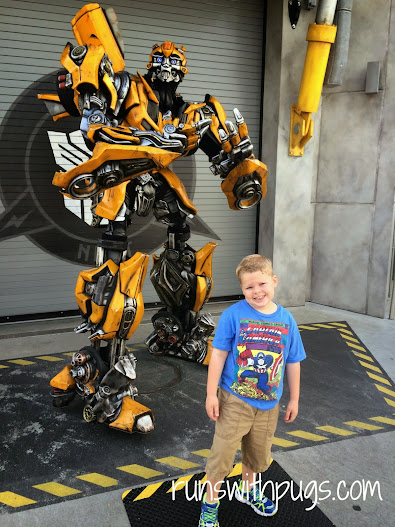 Little man wasn’t sure about TRANSFORMERS: The Ride. The queue is housed in a large building so we couldn’t figure out exactly what we would be in for. Since the line was short, I approached the cast member at the entrance and asked her what we could expect. She said that if we had been on The Amazing Adventures of Spiderman in Islands of Adventure, it would be a very similar experience – a flat track, with 3D effects, and not really scary. Little man listened intently and decided we would go for it. We loaded into the ride vehicle and I gripped his hand on the lap bar. Minutes later, he was shaking me off – apparently he was too grown up to need Mommy’s support on this one! He loved it!

Next up? Twister. Little man froze at the entrance and refused to even try, so we moved on to lunch at Mel’s Drive In. The food was decent (for theme park, concession type food), and my only complaint is that a lot of guests seemed to be using the dining plan or were signing up for the dining plan, which led to very slow lines. Not a fan of whatever was going on with that.

With full bellies, we made our way to the back of the park and hopped right on Kang & Kodos’ Twirl ‘n’ Hurl, The Simpsons Ride, and MEN IN BLACK: Alien Attack. Please note: when the rule is “no loose items allowed,” that also goes for sunglasses that might be perched atop one’s head. The first circuit of super-fast spinning sent mine flying off into the ride. Thank goodness there was a rack of decent, affordable ones in the gift shop at the ride’s exit, or I would have been miserable the rest of the rip.

We walked past a huge construction zone (they are creating Diagon Alley from Harry Potter – set to open this summer!), and then picked our seats for the Superstar Parade. From our seats on the curb, we enjoyed some gelato and watched the characters dance and interact with the crowd.

Afterwards, T asked if they could get henna tattoos, so the boys selected designs and got “inked.” 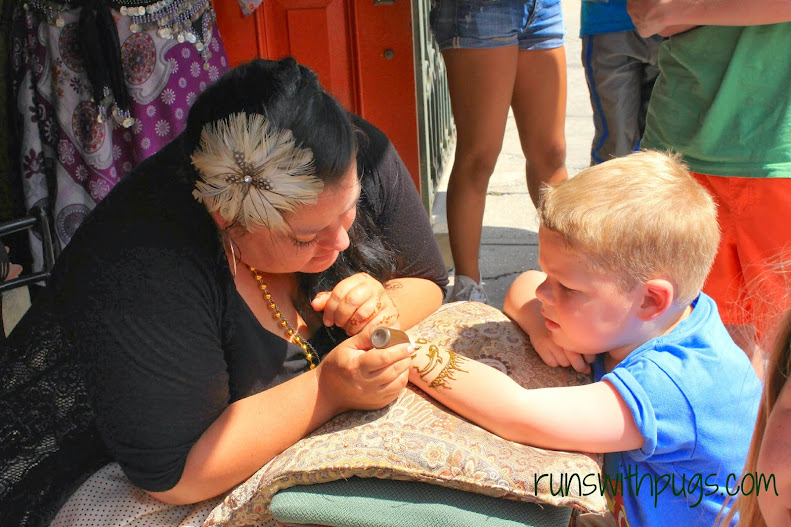 By this point, the park was getting more crowded. We were still in the thick of the Mardi Gras schedule and that night, Gavin DeGraw was scheduled to perform. While I would have loved to stay for the music and the parade, we were all exhausted, and we still had another day to go. I felt like we had had an incredible productive day so I didn’t feel too badly about loading everyone back into the car and going to check into our hotel.

While Universal Studios offers packages with three luxury hotels located right next to the property (soon to be adding a value hotel to the mix), we chose the Doubletree Orlando, located directly across the street.

It was half the price, clean, and spacious. We had a room on the 15th floor with a full view of the parks, two queen beds and a small pull out couch. Also, you can’t beat the warm cookies at check-in.

Little man took a quick dip in the pool, and then we opted to get an early dinner at the onsite restaurant. The food was good and service was excellent. After that, it was time for bed. We would be getting up early for Islands of Adventure.

At the end of day one, we were all so happy. Our experience had been wonderful. I was worried that some of the rides would be too intense for little man, even if he was the appropriate height, but he was pretty good at telling us what he did and didn’t feel like doing, and there really wasn’t any pressure. Our longest wait time was maybe 20 minutes (although we never did make it on the Minion ride because of the length of the queue). The staff was wonderful in all of our interactions with them. The park was clean and well-maintained, and while there wasn’t  lot of rhyme or reason to the layout (like the “lands” in Islands of Adventure or Magic Kingdom), I am excited to see what will be coming in Diagon Alley.

I couldn’t wait for our adventure to continue.

Are you a fan of theme parks? What’s your favorite?

What kind of rides do you prefer: big, fast thrill rides or more tame, carousel types?