We all enjoyed a great night’s sleep, and were dressed and checked out by 8:15 AM. It took us about ten minutes to leave the hotel and pull into a spot in Universal’s parking garage (I opted for regular parking today, which was fine). We had a  long morning to tour, as Mr PugRunner and T’s father were driving up to meet us for lunch at Hard Rock Cafe at 12:40, before they would take T and head back to the airport and I would head home with little man.

For breakfast, we grabbed pastries at the Starbucks in CityWalk and pushed through the turnstiles a little after 9:00 AM.

I had but a few goals for the day: to have little man ride The Amazing Adventures of Spiderman, and to have him meet Captain America. If I could possibly squeeze in a butter beer in The Wizarding World of Harry Potter, well, so much the better.

The first attraction we came across was The Incredible Hulk Roller Coaster. No one seemed anywhere near it, and I peeked quickly to see the wait time. Only five minutes! I looked at T and then marched all three of us up to the employee to ask if they offered any kind of rider swap. T was sent up the regular queue and I was sent around to the exit, where I simply explained to the worker at the gate that we were swapping out, and after T’s train unloaded, he sat with little man at the exit while I got my turn.

Hulk is, hands down, one of my favorite roller coasters. I was so happy for a chance to ride it.

Little man wanted a turn, too. Fortunately, he was quite satisfied to try out the test seats. 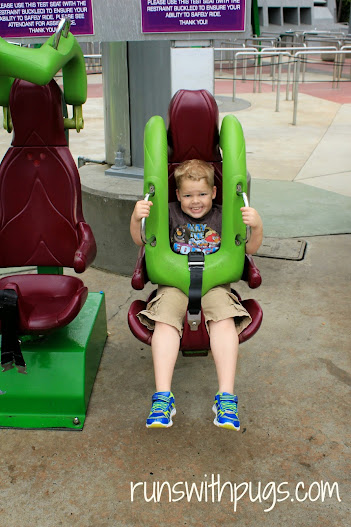 For some bizarre reason, I agreed to go with them on the Storm Force Acceletron. I don’t love rides that spin, and this was no exception. By the time it was over, I felt like I was walking sideways. Little man wanted to go again, but we managed to distract him by pointing out The Amazing Adventures of Spiderman. This was probably his favorite ride of the whole day. 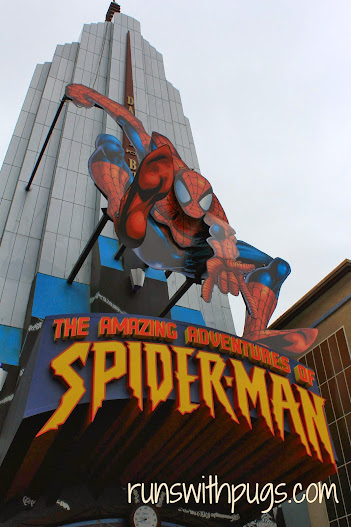 Upon leaving the attraction, we saw a sign advertising photos with Spidey, himself. We guided little man to the queue, and five minutes later, he was enjoying some awesome interactions with the famous web-slinger. 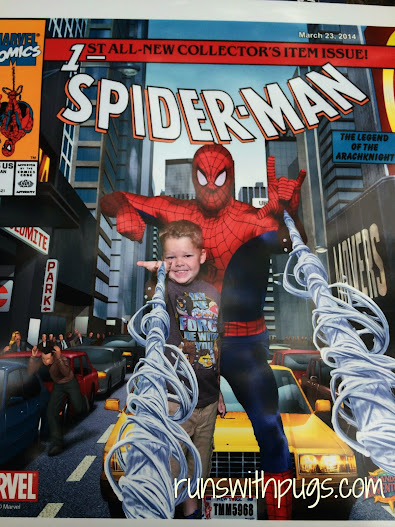 We bypassed Toon Lagoon (little man didn’t recognize any of the characters and there were a lot of water rides) and headed to the next land: Jurassic Park. Little man loves dinosaurs, in theory, but he wasn’t really enjoying the spooky sounds coming from the lush jungle landscaping. He went on the Pteranodon Flyers ride with T, and then they chased each other around the slides and bridges of Camp Jurassic right across from the entrance. Somehow, T convinced little man to go on the Jurassic Park River Adventure with him (think log flume with some pretty intense dinosaur animatronics), and while I didn’t think he would like it, I didn’t want to influence him negatively. I mouthed to T to cover his eyes at the end (when the big T-rex leans down before the drop) and went to the exit to wait. They found me minutes later – apparently, the riders coming off the boats were SOAKED and neither one wanted to get quite that wet. Crisis averted.

I would have liked to stop in the Jurassic Park Discovery Center, but the noises were really starting to get to little man, so we pushed onward towards Hogsmeade. Right before we got there, however, we saw the most incredible sight. A “zookeeper” holding a (fully functioning, breathing, blinking, moving) baby triceratops! 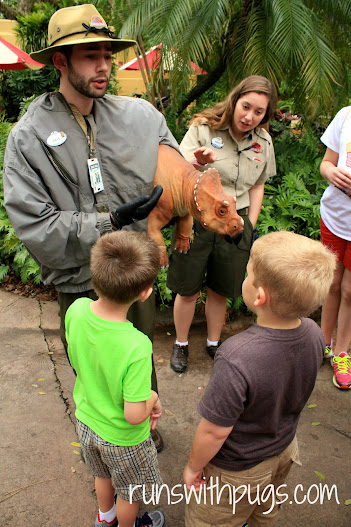 Spectators gathered around, petting the baby and asking questions. The zookeeper responded with answers and explanations, completely in line with John Hammond’s protocols. Little man was enthralled and I thought it was one of the more creative things I’ve seen in a long time.

And then we were in Hogsmeade. 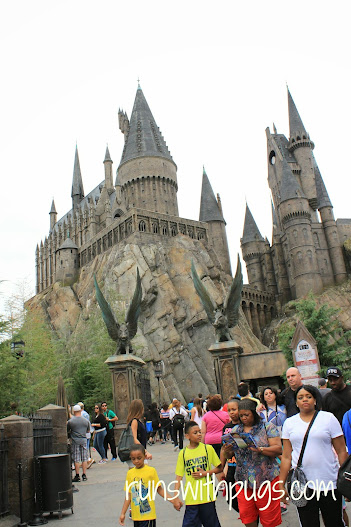 This was my first time visiting the Wizarding World of Harry Potter. I had zero delusions about actually getting to DO anything in this area. We were well past rope drop, the crowds which had been nonexistent in other parts of the park were clearly all collected here and the line for the kiddie coaster was 60 minutes long. I wasn’t interested in Harry Potter and the Forbidden Journey (I am 110% sure it will make me sick), but I did want to look around and soak in all the details and ambiance. All the people stressed me out a bit – I wanted to take my time, but I wanted to keep the two kids happy, too. I noticed that the line for Dragon Challenge was only 15 minutes, so we decided that T would ride one of the coasters, and I would take little man to Honeydukes for a snack. We would meet at the Hogwarts Express station. 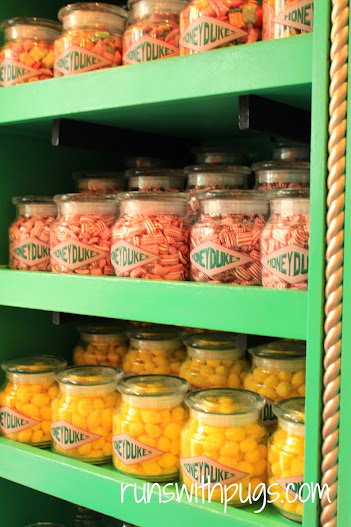 I loved all the details. It was like JK Rowling’s series had come to life in the middle of Orlando and I was enthralled.

I tried to talk little man into a chocolate frog or cauldron cake, but he insisted on a big lollipop. I got a box of fudge flies. 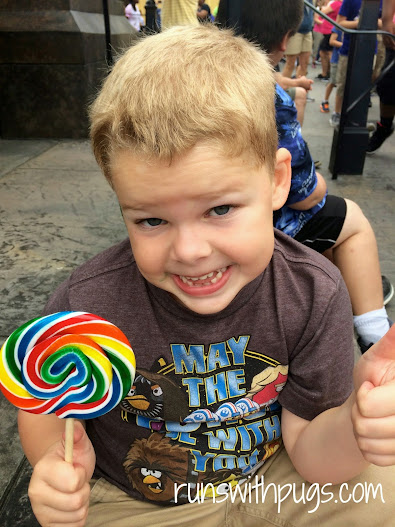 Since the line for butter beer was painfully long (next time, I’ll treat myself), we said hello to the conductor of the Hogwarts Express, instead. 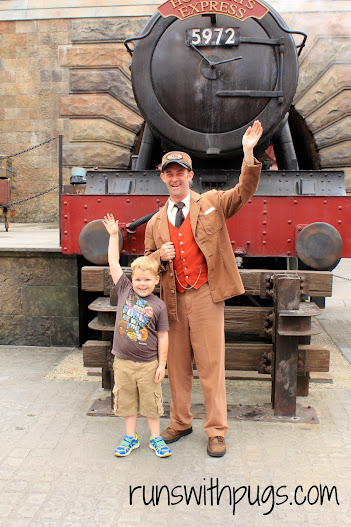 When T was finished with his ride, we continued on through The Lost Continent and into Seuss Landing. I wanted to be back to Marvel Super-Hero Island by noon for a meet & greet with Captain America, so we chose one ride. Little man wanted to try the High in the Sky Seuss Trolley ride, and so we did. It was really cute, and provided a birds-eye view of the Landing and nearby areas.

And then we hustled back to our original location in the park, just in time to meet one of little man’s favorite guys. 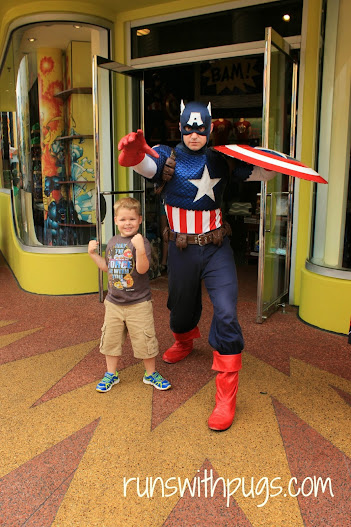 We were the second or third to last people to meet him, so we really were in the nick of time. Whew.

And then, it was time to exit the park.

For lunch, we had priority seating at the Hard Rock Cafe in City Walk, where we would be meeting Mr PugRunner and T’s dad. We got seated immediately and ordered appetizers while we waited. It’s been a while since I’ve eaten at a Hard Rock, and I was at that point of too hungry to want to eat. We shared a huge platter of nachos and then I got a chicken tender appetizer, which I couldn’t even really finish, though it was pretty tasty.

As we dined, Mr PugRunner and I discussed upgrading to annual passes. If we did it that day, we only had to pay the difference between our two day ticket and the Florida resident pass. We had had such a brilliant time and little mans was so enthusiastic about our trip that it didn’t make sense not to go ahead with it. I headed to the guest services windows to make it happen and we all met up to head into the parking garage and take our leave.

All in all, it was an exceptional trip. We saw and did a lot in a limited period of time, and there is still a lot more we need to do. I was really surprised by the lack of crowds. The longest queue over two days’ time was 20 minutes, which was nothing short of miraculous during peak season and spring break. The only thing that I can figure is that all the people gravitated towards the Wizarding World of Harry Potter and the ones not in the park were at the Megacon event in Orlando at the same time. I’m not complaining.

The parks were clean and well-maintained, employees were courteous and engaged. What we saw as far as food seemed varied and reasonably priced (for theme park fare).The characters and their handlers were awesome with the little ones. There are some rides that are still too intense or unsafe for the younger set, but little man is at a good age – he can do a lot of things, and has room to grow into others. I also like that older rides are retrofitted or revamped on an ongoing basis to keep up with movie trends.

And I think the best part of the whole thing, besides spending time with family and loved ones in a really cool place, is that little man developed a new interest. He doesn’t have much knowledge of Harry Potter and I tried to explain something to him while we were waiting in Hogsmeade. He decided he wanted a magic wand, but we didn’t have time to go hunting for one, and I told him that we would when he was a little older and understood more about Harry and his adventures. In the car ride home, I went into more detail and asked him if he thought he might like me to read the Harry Potter books to him. He said no.

That night, after his shower, he climbed into bed with me for his bedtime story. I asked him if he had selected a book. He looked at me and said “Harry Potter, mom.” 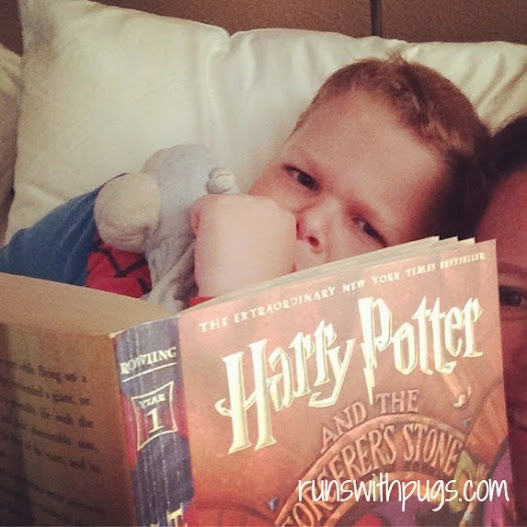 Are you a Harry Potter lover?

Did you own one (or many) Hard Rock logo t-shirts at any time in your life?