This is a sponsored post. I was given a complimentary entry to the local 2014 Color Me Rad event in exchange for my review. All opinions are my own.

After participating in (and loving) the 2013 Color Me Rad 5K event in Jacksonville, I was really excited to be able to have the chance to do it again, this year.

Last year, Color Me Rad took place in October, but had returned to the area in March of 2014. I don’t think this was much of an issue as the weather is pretty temperate in both months.

Another change for 2014 was the course. Last year, the run would through the parking lots of Everbank Field, before diverting into the concourse of the stadium and around the actual football field. It was a neat way to finish up a fun run, but due to the massive construction going on, a change of route was necessary. This year, the run began in Metropolitan Park, right across the street from Everbank Field.

Packet pickup was also located in Metropolitan Park, and was held on Friday before the race from 2:00-7:00 PM. I was planning to be there on the earlier side, but due to a change in errand schedule and a bad accident on I95, I arrived close to 5:00PM. There were two lines: one to either register on-site or to get your bib number, and then a second to pick up the rest of your bag: gender-specific event shirt, RAD tattoo and sticker and sunglasses.

The lines were both pretty long, but there were a lot of volunteers working and it moved rather quickly. The biggest hiccup was that the server seemed to keep going out, probably because of the weather and high traffic. It happens.

I had to pick up packets for myself and my three friends, and that was easy enough – they had given me their signed waivers beforehand, so no problems there.

I didn’t stop to really check out the merchandise. I already had a bandana and a tank, and I didn’t need anything else. There were plenty of cute shirts and accessories, though, both for the actual run and for souvenirs.

I went home, dropped off the packets to my teammates and prepped my things, praying for no rain. 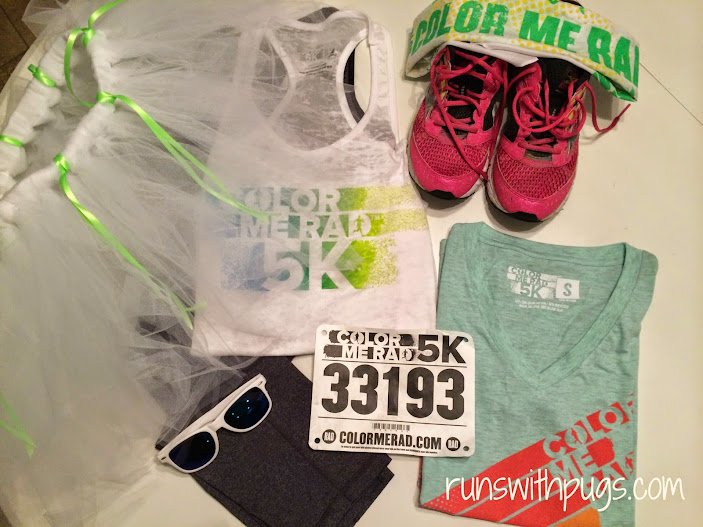 We were up nice and early. My friend K was picking me and other friend S up at 7:15 so we could be there by 8:00, in time to find parking and take pictures. (It was both of their first official, organized run, and they had to experience all of it to the fullest). I had also discovered that I had been given the wrong size event shirt, and when I asked for help on the Color Me Rad Facebook page, they told me to just bring it back to registration in the morning and they would happily switch me to the correct shirt. (Yay!)

This year, parking at Everbank Field was $7 per car. Plenty of advance notice was given and while it was annoying, sometimes it happens, especially when using a sports venue. As long as we had a spot within reasonable distance of the start line, I was happy.

We finished getting ready in the parking lot and then walked over to where the crowds were gearing up for the run. We had to scramble to get our pre-RAD photos – volunteers with color bombs and the new color blasters were stalking through the crowd, trying to give preliminary hits of brilliant hued powder to participants. This was another change from last year, where all color was reserved for the finish line to ensure that everyone started out as close to a “blank canvas” as possible.

There were plenty of backdrops and inflatables set up for photo opps. We promptly took advantage of as many as we could.

The weather was holding, but threatening. I suggested that after we used the restrooms (in a real building!), we move to the start line. Color runs usually let a certain number of people go at a time, to ensure that there isn’t any overcrowding at the color stations along the way. Since we would be walking and running, my hope was that we could at least get finished and enjoy the post-run festivities before the storms hit for real.

It was a good plan.

As the 9:00 AM start approached, more people crowded in at the start line and the music pumped louder. A few volunteers came to the start, armed with fire extinguishers, full of what we could only assume was color. One of the volunteers spotted me, still all in white, and pointed. As the air horn sounded, he ran up to me and blasted me full on with purple.

Epic. S said I looked like a purple minion. She wasn’t wrong.

The course was nice. It was flat and wound through the streets surrounding the stadium. The color stations were evenly spaced and well manned, and the volunteers in charge of throwing color were enthusiastic and fun. After our initial burst of purple, we were doused with yellow, orange and green, and then we came upon a station where liquid blue was sprayed on runners (I circumvented that one. It was drizzly and I just didn’t want to be even more wet).

We ran some and we walked some. There was an excellent crowd and the participants all seemed to be having loads of fun, despite the less than pleasant weather. There was a lot of great music along the way and it kept the party atmosphere going, and a water stop at about the halfway mark, where volunteers handed out mini bottles of H2O.

This year, we were handed our included-with-registration color bombs before we crossed the official finish line, rather than after. It definitely cleared up the congestion the finisher’s chute faced in 2013. We ran throughout the last color station, smiled for the photographers and then navigated the color-splattered crowds to find S’s daughter and mom, who had come to the finish line to celebrate her first 5K.

The after party was a little bit smaller than I remember, but still lots of fun. I noticed an absence of food trucks, but we did get bottles of water and protein/granola bars upon completion. There was music and dancing, and plenty of color tosses.

I ran into my good buddy – the one who had blasted me with purple from the fire extinguisher as the run began – and got him to pose for a picture with me.

You can tell he took great pride in his work that day.

We were all absolutely drenched in color.

You can tell by our faces that we had the best time. And even better than a fun day? S and K absolutely LOVED their experience. 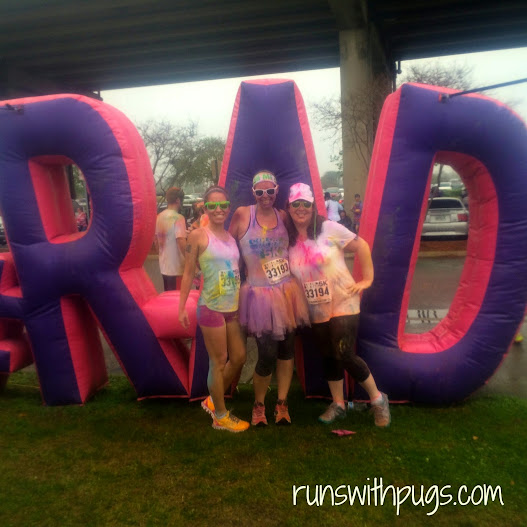 I’m so proud of both of them for completing their first 5K, and I hope to see them out there again at other events in the future.

Once again, Color Me Rad put on a wonderful event. I loved seeing so many people out there, even with the threat of storms, running, walking, pushing strollers and breaking a sweat with smiles on their faces. I remember a time when I used to get together with friends at night, have a few drinks, and sleep in the next day. Now, we get up before the sun, load up on water, and run for fun. It’s quite a change, but it’s an awesome one.

A special thank you to all the volunteers, police officers, and organizers for another great year!

Do you find that your social time is more based on entertainment or on physical activity?

What are your favorite runs to do with friends?