You are here: Home / Uncategorized / race report: the flavor run

This is a sponsored post. I received a complimentary Flavor Run race entry for myself, and several others to giveaway on this blog for promotional purposes. All opinions are my own.

Two of the inadvertent benefits of running are getting to try new things and explore new places – both of which came into play when I got the opportunity to participate in the brand-new Flavor Run in Nocatee on the first weekend of April.

Having never run in the Nocatee area, I was pretty pumped. The neighborhood is beautiful (and flat) with lots of lovely homes and paths to see along the way. And the idea of a color run where the dyed powder actually tastes (and smells) of fruit (which is what The Flavor Run is all about) was definitely intriguing.

Packet pickup took place at the Nocatee amenity center the Friday before the run. It was very small and very easy. The volunteers manning the booth were extremely friendly and helpful. They loaded me up with a (women’s cut) event t-shirt, a very pretty customized bib, temporary tattoo and a flavor/color packet of my choosing (I went with grape). The pre-run email had asked that participants bring their own bags to help keep the event as green as possible, and so I loaded everything up into my big purse (paper bags were available upon request.)

I then moved over to the merchandise table where I was able to pick up a white logo tank for the morning. For some reason, I was having the worst luck finding a decent white top at a reasonable price (I didn’t want to spend a lot just in case all the color didn’t come out). Problem solved. They were also selling shades, shirts, water bottle and tutus.

While browsing, I met John, who had been my contact for The Flavor Run. It was great getting to put a face to the emails and I was pretty impressed that he was rocking a tutu. I got the little final details about the start line and parking (I’m a lunatic about parking) and headed out.

I finished making my last tutu of the season and got my things ready to go.

For some reason, I was up and and on the road super early on Saturday morning. I excepted it to take me about 20 minutes longer to get to the race start, but it didn’t, so I camped out in my car in the parking lot across from the run set up. I was thinking about getting out of my car to take some pictures, but an incredibly dense fog rolled in, pretty much obscuring most of the visibility. I stretched my legs with a walk to the nearby Publix to use the restroom and then started to keep an eye out for Kristin, and L and A, who would also be participating.

As luck would have it, L and A were parked two spots away from me! A had brought her parents and her little one and we had fun just chatting and catching up as we waited. When Kristin arrived, we started posing for our pre-run pictures.

Thanks to A paying attention, we heard that the start time was delayed from 9:00 AM to about 9:30. I’m not sure if there were some glitches in set up or if it was to let some of the fog burn off, but it was fine. I was worried that it was going to get a little hot at that hour of the morning, but not much to be done but enjoy the music and the people watching.

In the field where the start/finish line was positioned, there was face painting and a shaved ice truck, and people, both participating and not, were hanging out with their families, and in some cases, pups. It was a really nice, local vibe. And it smelled fantastic! People were already tossing their fruit-flavored packets to get colored up, and it was like being in a Skittles factory.

Before too long (and definitely not as late as 9:30) we  were ready to get started.

John was up on one of those towers, emceeing the event. He thanked everyone for their patience, briefly described the course (I was going on the plan of “follow the people ahead of you” since I was completely unfamiliar with the area) and let us know that this was actually the second ever Flavor Run to go down. Kind of like history in the making. And then we were off.

We ran all through the Nocatee area: main roads, around the pool, along the outskirts of some of the subdivisions. There were flavor stations situated along the way, manned by very enthusiastic volunteers. Color was kept off the main roadways, so to get our share, we had to cut through grassy areas. I remember that orange was first, but not sure about the order thereafter. I will say that someone had done some landscaping and fertilizing in the community so it was nice to have the fruit smells to help cover up the less pleasant odors.

Kristin and I ran ahead for a bit, but then we fell back and L and A caught up to us, and we continued on that way for the duration. It was nice to walk a bit, run a bit and chat a lot.

At one point, we cut into the woods, via the paved walking/biking paths in the community. I am calling this the closest thing to trail running I ever need to get.  There were trees, and spooky sounds in the woods and a little wooden bridge.

And a four foot long black snake, just hanging out near the foliage. I did not take a picture because I was too busy sprinting for my life. Like Indiana Jones, I hate snakes.

After more color, a nicely stocked water stop and (blessedly) houses instead of woods), we finally saw where the road would wrap around to the finish line and we picked up speed so we could cross through the last color station and hit the finish line!

We collected our medals and headed to the tents in the middle of the field, where volunteers were cutting up and plating delicious fresh fruit.

I don’t think anything tasted quite as good as those two chunks of watermelon I scarfed down. I really wish I could manage oranges, because they looked delicious, too. 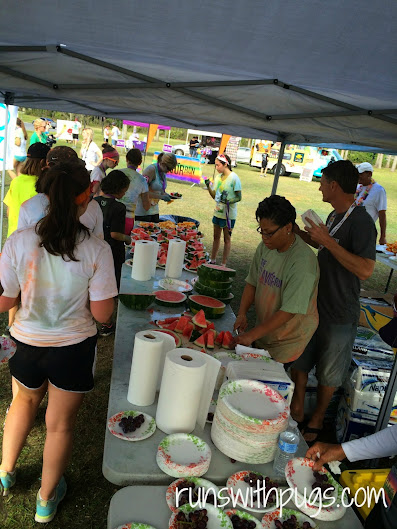 We hung around for a little bit, enjoying the music, before deciding to go back to the cars to clean up.

Where we got a very special treat from A’s parents. They had offered to grab donuts for us while we were running and A turned them down. Halfway through the course, when it was just really sticky and hot, I was joking with her about how it would be really nice to have not only donuts, but some beer to help cool down.

I have now learned that A does not mess around when it comes to beer. She pulled off the course immediately, called her mom, and made it happen. And yes. The combination was divine. (Thank you for being so sweet!)

This was a really nice event. I loved that it was a little smaller than other fun runs I’ve done – it made for a comfortable, neighborhood feel. This was very family-oriented and perfect for kids. We have saw some adorable pooches getting in on the flavor fun.

The idea of the flavored powder was excellent. I didn’t get any in my mouth so I can’t vouch for the taste, but as mentioned earlier, the smell was great. The “flavor fairies” weren’t quite as aggressive as volunteers at other color runs I have done, so we didn’t walk away with every inch of skin covered – but this wasn’t a bad thing. I liked how they were pretty careful not to nail runners in the face and head. It’s also hard to hit everyone thoroughly in wide open spaces. If the volunteers close ranks a little bit in the future, they will have a better chance of getting more flavored color on everyone.  Also on the note of color, it would be nice to have an organized flavor toss post-race, like they do at other events. We ran with our flavor bags, but never came upon an opportunity to make use of them.

Packets were great. I love my t-shirt (not tech, but very soft and comfortable), and I thought giving a medal was a nice touch, especially for some of the younger participants. I like bling in any form, so even though this wasn’t a competitive race, I appreciate having a medal to commemorate the occasion. I also really love the bib that accompanied this race. 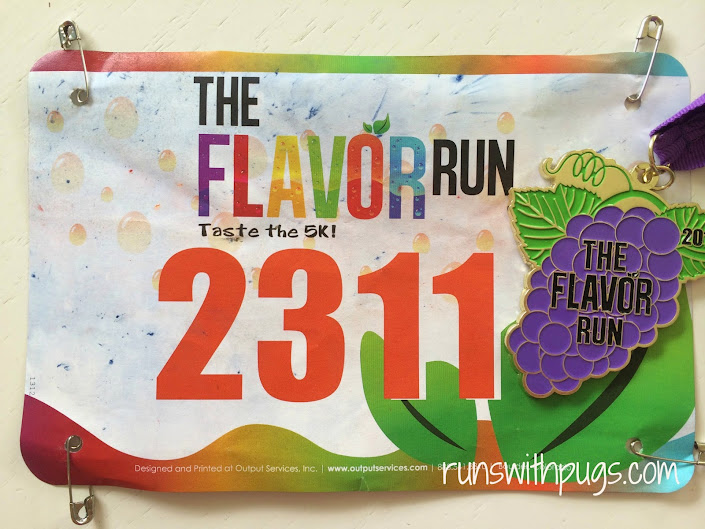 Event communication was great – lots of pre-race emails with full details and even the late start was announced and participants were kept in the loop as to what was going on. There seemed to be plenty of water and post-race refreshment available. It was definitely hot and it would have been nice to start at 8:30 instead of the planned 9:00, but it was manageable.

Thanks to the volunteers and organizers for an active and fun Saturday morning. It was great running in a scenic location with some friends and getting to experience something a little new and different.

Is The Flavor Run coming to your area?

Have you ever run an event that was brand new?