I’ve been all over the place with blogging this week – I have a lot of catching up to do at home, so it just hasn’t worked out well for sorting photographs and getting all my thoughts typed out.

This week, while not exactly what I had planned, was pretty productive. Despite storms, and soreness, I kept up a reasonable level of activity. It was also in my plan to try two new things this week: yoga and swimming.

I never did get around to the swimming, but it will come.

Tuesday: attempt at speed work – completed 4x 800m repeats with a warmup before having to call it quits because of the heat and humidity. I was annoyed at myself for even thinking about bailing, but was pleased that I got some of it in. Total of about 2.25 miles.

Wednesday:  60 minutes of yoga at sunrise. I’ll report more on how the actual class went next week.

Thursday: Rest. Because I bailed on my long run.

Friday:  75 minutes of “center, stretch & strengthen” yoga, .75 miles of dog walking. It turned out to be cooler than I expected, so I could have run after dropping little man at school, but I had already reserved the class. The pugs needed the exercise anyway.

Bentley is finally at a point where he is letting me harness him (he HATES people, especially me, touching his paws, and he has to have a special harness where someone has to guide his legs through the opening – it’s not a step in apparatus).

Molly, who hates any and all physical activity, got jealous, so I offered to take her out afterwards. She made it halfway, before she just couldn’t do it anymore and had to be carried home, like the royalty she thinks she is. 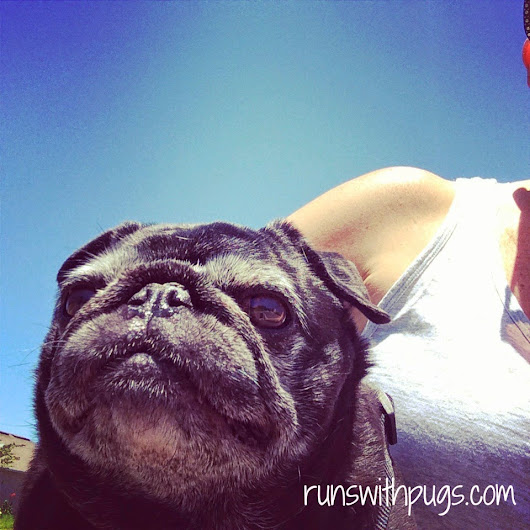 I think we will be getting her a harness of her own. She’s just going to have to suck it up.

Last, but not least, I had to deal with our workout clothes. Slowly, but surely, we are running out of room in our drawers. We have purged and reorganized, but it became abundantly clear that we needed some more space. I got a hanging shelf unit from Target, and we are now using it for smaller items: socks, headbands, belts, compression sleeves and hats in the two drawers,

sports bras, yoga tops, and Mr PugRunner’s shorts and tech shirts in the shelves. I also started hanging my skirts to keep them from getting too wrinkled. 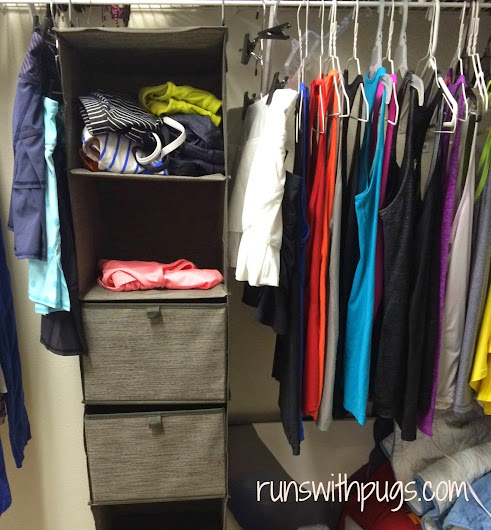 It’s not the most glamorous, but it was a relatively inexpensive and quick fix.

How was your week of workouts?

How do you organize your fitness clothes and gear?

What do you have planned for the weekend?