I have long declared my … oh, let’s just be honest… hatred for yoga. It began about six years ago, when I signed up for four prenatal yoga classes. I attended two of them. Partly because I couldn’t stand the whole relax/empty your mind/yoga’s not a competition woo-mantra (I have THINGS to do! I can’t just sit around for an hour and RELAX!) and partly because after the second session, my blood pressure bottomed out and I almost fainted in the hallway of the studio, while crawling to the bathroom so I could throw up or lay on the ground in fetal position (I wasn’t being particular).

After that, I pretty much swore I wouldn’t set foot in a studio again.

It was a pretty easy oath to keep. There weren’t any yoga classes remotely close to me – out of sight, out of mind. When I started running, the idea of supplementing with yoga was suggested to me several times. I realized it would be great for stretching and flexibility, but I had no intention of paying actual money to drive any significant distance or to torture myself as I did so many years ago. I caved enough to purchase a Jillian Michaels Power Yoga DVD (the “power” made it feel more like exercise) and I did it maybe 10 times. Maybe. My heart wasn’t in it, though, and I’m not sure how much benefit I actually derived from my efforts.

Things changed a little when I got hurt earlier this year. I admit I’m not religious about my stretching, and I also know that my cross-training was leaving much to be desired. When a new yoga studio opened up less than 15 minutes away, owned by the friend of a friend, my interest was piqued, just a little. I think what pushed me over the edge was the fact that they offered a “mild intensity” sunrise class once a week. While I do have a little time to get to a class after I drop little man at school, it’s nice to have everything done and out of the way before the day really starts. When I saw a friend mention she would be attending, I invited myself along.

I even offered to drive. When I commit, I commit all the way.

I always feel incredibly productive to be up and out while the moon is still bright in the sky. Tired and crazy, but productive.

The studio was gorgeous. Not quite what I was expecting. It was definitely small, but comfortable and airy. In my previous experience, venues had been dark and stuffy and stifling. This was different, in a good way.

There were three of us in the class (we had all come together), and it was pretty comfortable for my first time out in six years.

Our instructor, P, was incredible. She was extremely sweet and soothing, and I really appreciated her approach. She kept us on track, but there was a nice, light undercurrent to everything. The lesson was slow and we really focused on stretching and maintaing poses. P encouraged us to reach outside our comfort zones, but not in any terrifying kind of way. Ok. Her suggestion of balancing our knees on our triceps to attempt Crow was a bit terrifying, but she took it in stride when we gave her the side eye and opted to remain comfortably in our squats.

After that first class, I was sore, but inspired. So inspired that I signed up for an introductory set of 8 classes for $40. You can’t beat that. I knew if I was invested, I would keep going back.

And I did go back, two days later. This time, the owner of the studio was leading, and I was in a class of strangers. Usually, this would intimidate the pants off me, but I sucked it up. The class was 75 minutes long and the goal was strengthening and core work. It was tough. I kept up and was able to do most of the moves without modifications, but I could feel it. As I side note, I really liked the owner. She was very positive and encouraging, and emitted a lot of great energy.

I also tried a 60 minute power flow with weights. This is probably my favorite of the classes. P teaches this one as well, and we can choose to use two, three or five pound hand weights (or none at all). The class focuses on traditional yoga positions, but adds dynamic movement (biceps curls, tricep presses, etc) as a supplement. 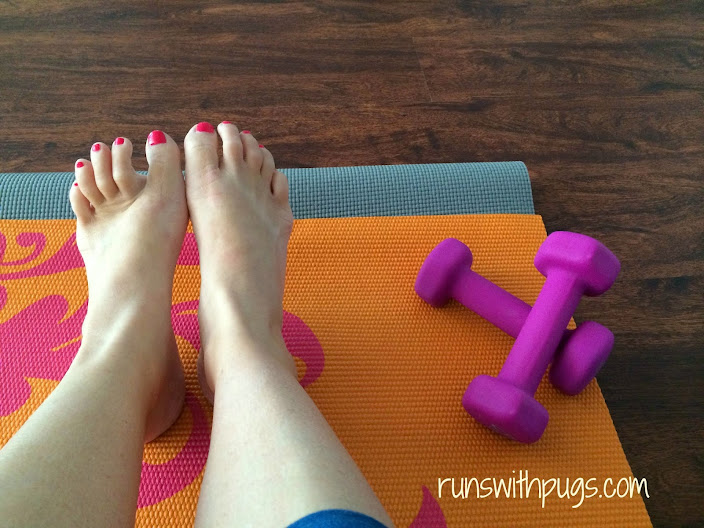 So far, I’ve been to five classes. Each one has been a little different, which is great. I won’t get bored if the instructors make a habit of mixing things up. I also love that if the class is smaller, the instructors take into account things the students might like. P knows that I am there as a runner, so she will pull in some great hamstring or hip stretches that are really beneficial. It’s a small courtesy, and one I really appreciate.

Dare I say, I am actually enjoying the experience. I have felt very comfortable with the instructors, so far, and am excited about attending class, even when it means setting my alarm for 4:50 AM in order to get there on time. I can even see some small progress with certain stretches and poses, and it’s a good feeling. P also shows us how our poses are going to evolve over time. It starts out really simple, with a lunge, maybe. And then she asks us to move our hands into a position that is slightly less comfortable, and we do it, feeling all kinds of badass. And then suddenly, she seems to dislocate her shoulder and twist into a shape that is so incredibly out there, and tells us (without the slightest indication of exertion in her voice) that this is what we are shooting for in the future. It’s hilarious because I can’t personally see my body every recreating some of things hers does, but also gives a goal. A very long term goal, but a goal none the less.

I do struggle with certain things. Savasana, or corpse pose, for example. Because I really just don’t understand doing a nice routine, feeling all kinds of accomplished and strong, and then laying limp on one’s back for an indeterminate amount of time. I also prefer to opt out of the shoulder massage the instructors offer at this time (see also: I hate massages). I know it kills P to see that I can’t just “let go” enough to lay “naturally” (whatever that means), but in our 3 classes together, she has admitted that I am getting a little better about it. Even if I do continue to make grocery lists in my head rather than focusing on the stillness. You can take the uptight girl to yoga class, but you can’t take the uptight out of the girl. Or something.

To be honest, I’m glad this is working out. It’s a low impact regimen, so it hasn’t been too hard on my body and I’m glad that I am in a classroom setting to ensure that my form is correct and that I am accountable for pushing myself (at home, with my DVD, I confess to not giving it my all on more than one occasion, and I can guarantee that my form was often disastrous).  I am settling into a two-a-week schedule, definitely taking advantage of the mild intensity sunrise class and then fitting it whatever other class I can.

What other types of workouts do you combine with your running?

Did you ever go back to something you thought you couldn’t stand only to find out you liked it after all?