The Florida Striders Memorial Day 5K had special meaning to us.

After all, one year ago, we ran this as our very first race ever.

I was kind of on the fence about registering, but sentimentality got the better of me, and we went for it. Unfortunately, I was fresh off being sick with some kind of bizarre ailment and I was really nervous about racing. The idea of a DNS really bothered me, and I figured worst case scenario, I could resort to walking. Not a comforting thought, but the option existed, and it was better than not starting at all.

My heart really wasn’t in it, but I tried to keep to my normal routine of setting out my race outfit (we would be picking up our packets in the morning),

and enjoyed a really delicious meal at a neighbor’s BBQ.

Then it was off to bed to try to rest up. We had a super early wake up call, because we had to get ready, and then pick up my parents. They were going to hang out with little man and his friend while the adults did the 5K.

I had a last minute wardrobe change, and then we hit the road. I wasn’t feeling great but tried to let the beautiful sunrise cheer me up. 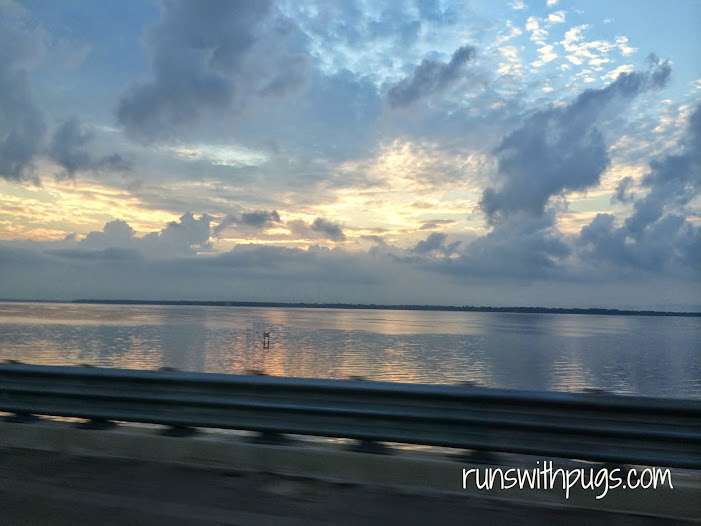 The race moved from last year. It was set back about a mile or two from its original location, and I’m not sure I loved the change. We arrived 45 minutes before the gun, and had to park on a crowded side street. It seemed so packed in comparison to last year, with far less options. It kind of threw me a bit.

Devon, from The Food Bitch Blog, coincidentally parked right behind us. We hadn’t seen each other ages, and it was nice to catch up as we made our way to the packet pick up and start line.

I was in a fog, all morning. We got our packets and our chips, and then tried to get my parents situated with their camp chairs and all the bags. Mr PugRunner got little man signed up for the kids’ race, and I ran into a group of runners from around our neighborhood and joined them on line for the restroom. We also met up with A Mom on the Run‘s Kristin and her family (B would be hanging out with little man until it was their turn to run). Normally, I’ve got the camera out and am looking for great ambiance photos and otherwise taking it all in, but I just couldn’t get it together.

It was humid and muggy and I was pretty sure that this was not going to be a spectacular run.

Mr PugRunner found me at the starting line.

We lined up, and the National Anthem was performed. The singer asked us all to join in, and it was a beautiful moment of camaraderie.

The gun rang out and we began.

My first mile was actually really solid. I was pleased to go out as strong as I had, considering the situation. Unfortunately, the thick, heavy air was doing me no favors, and soon, I was really struggling to breathe. It was certainly frustrating, but there wasn’t anything to be done for it but forge ahead.

At the 1.5 mile mark, Mr PugRunner caught up to me. I’m kind of glad. I was really about to throw in the towel, but he told me that our intervals matched up so he would stay close. I’m pretty competitive when it comes to us, but I appreciated the support. We had some half-hearted leap-frogging (he would get a little ahead, and then I would), but we were within eyesight for the rest of the race.

The new course was nice. It wasn’t as scenic as last year’s route, but there also weren’t the little hills from last year, either. I spent a lot of time focusing on my feet and the pavement ahead of me, rather than taking it all in.  I was glad I was there, but I wasn’t enjoying the run.

I did try to smile, though. 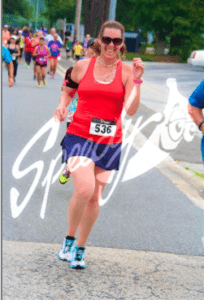 Perhaps the first time we have ever run together as a couple. 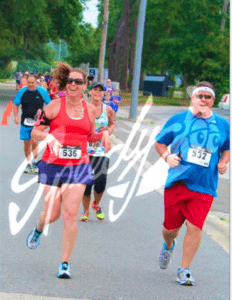 Finally, we turned the last corner, and sprinted to the finish line. I was, regrettably, so happy to be done.

I had to crouch down after claiming my medal. I was a little lightheaded, and worn out. I downed quite a bit of water when we got back to my parents and rejoined our friends.

Had I known little man was going to attempt to sprint the whole thing, I probably would have asked Mr PugRunner to supervise – I had a hard time keeping up. Which, isn’t the worst thing, in the world, but it was a little nerve-wracking since part of the route was set up along a main road and the only thing separating the children from traffic was a row of cones. The mile was an easy out and back, and when we got to the last turn, I just let him go. Mr PugRunner and his grandparents were set up before the finish line, and Mr PugRunner hopped on to the course with him to get him to the finish line. 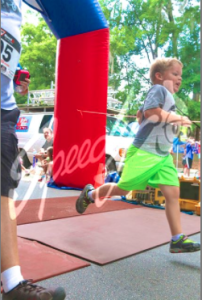 We need to do more races with him. He loves it so much, and I love having a family hobby.

No PRs for me, this time, but it wasn’t a worst, either. I’m glad I put myself out there, and I’m looking forward to feeling better and performing at a higher level.

What a difference a year makes.

Do you run races when you’re under the weather, even though you know you won’t be in top shape?

What was your first race?