On Saturday morning, we woke up at a somewhat reasonable hour (7:00 AM – whoo hop for sleeping in!) and took our time getting ready to leave at 8. We figured Hollywood Studios would have already had their early-morning influx of Star Wars fans, getting wristbands for the celebrity meet-and-greets, scrambling to get to the retail outlet, Darth Mall, and rushing to sign up for the various events (Jedi Training, Padawan Challenge, etc) in the park.

Since we had absolutely zero preparation for the day, we didn’t even know what celebs would be onsite. We had our character dining reservation for breakfast at Sci Fi Dine-In, and a 12:15 Star Tours Fast Pass +. That was the extent of our plan.

We got a pretty sweet parking spot, and were able to skip the tram again. The lines at bag check and the turnstiles were nonexistent, and we pretty much waltzed right into Hollywood Studios. It finally dawned on little man, from the banners and signage, that it was Star Wars Weekends, and he was so excited.

He and I activated our Magic Bands and stepped into the park. There was a cast member (Cindy, from Columbus), standing nearby with a stack of Star Wars specific park maps, and we moved over to her to grab one. I’m not exactly sure what happened to Mr PugRunner, but for some reason we were waiting and Cindy struck up a conversation with us.

They chatted about Star Wars, and he was showing a lot of interest in the map. He told her that he had done Jedi training before, but today we were just getting breakfast, etc, etc, etc (he can talk a blue streak). Cindy asked him if he really loved Star Wars and he said “Yes, I’m a big fan of Star Wars.” She asked us to come with her, and led us over to a tent-covered table located in the entrance of the park. She asked the cast member manning the table to hand her something from underneath the counter. I figured it would be something like a sticker or some kind of little Star Wars tchotchke, but instead, she pulled out a folded piece of paper and produced two wristbands.

To little man, she said “Would you like to be in a parade?”

You see, every day of Star Wars Weekends, there is a Legends of the Force Celebrity Motorcade. It’s led up by Mickey in a Jedi costume, and features pretty much all the fan favorites from the Star Wars saga, including that weekend’s celebrity guests. Also walking in the parade? A group of children in Jedi robes, brandishing light sabers, selected at random from guests among the park.

There is pretty much no way we could have planned for this or made it happen. Little man was in a Star Wars t-shirt, but certainly not all decked out in ultimate fan wear. It was just plain ol’ luck, and the goodwill of a lovely, lovely cast member (thank you, Cindy!). Of course, little man’s eyes got wide and his jaw dropped, and he responded “YES!”

Cindy asked him to pick a parent to walk with him in the parade (he chose Mr PugRunner) and put the wristbands on them. We were report to a designated area at 10:45, and then I would be taken to a reserved viewing area, and Mr PugRunner and little man would be taken backstage for the main event.

We practically floated our way to breakfast.

As we passed Star Tours, we saw the stand-by line was only 10 minutes, so Mr PugRunner took advantage and accompanied little man for a ride. And then we got on line to check in at the Sci Fi.

The only problem was that our reservation was 9:40 and we had to be at the meeting place at 10:45. I was more than a little nervous about it. I explained our dilemma to the hostess at the check in stand, and she kind of shrugged it off. She said that she would try to have us in by 10:00 (we were checking in about 15 minutes before our reservation, per the instructions one receives when making dining reservations at Disney), and that we should just tell our carhop. Hmm.

So we waited (me, somewhat anxiously), and right at 10:00 our name was called, so we could get in line for our included photo with two favorite villains. 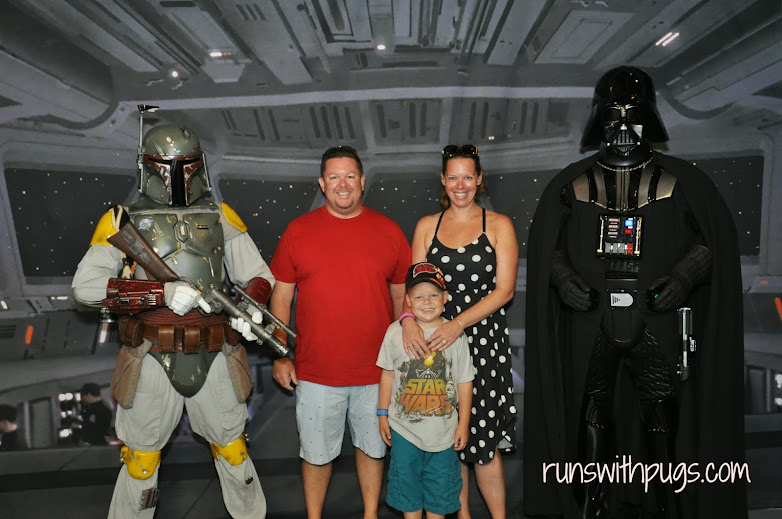 Darth Vader positioned us by “using the force.” It was pretty cute.

We were then led inside and seated in our car with our menus. I was a bit perplexed to see that the restaurant was pretty empty (not sure why the long lines outside…), and started looking around for our server.

Sharon appeared a few minutes later. She took one look at my face and asked me what was wrong. I explained the situation and that we were on a really, really tight schedule, and she didn’t even flinch. She told me that she wasn’t leaving the table until we had placed our order with her. Everything would be fine.

True to her word, Sharon was quick and efficient. We never felt rushed, and we were able to (almost) relax in the dark theater, watching clips of Star Wars movies and vintage Star Wars cartoons on the giant movie screen.

Our meal included a little platter of pastries per row of the car (which meant that I had this one all to myself).

The second course was a choice of fresh fruit or a parfait with greek yogurt, granola and fruit. I chose the fruit. I think the boys had the parfait. We all got a decorative honeydew garnish, cut in the shape of Yoda.

I am pretty sure we all ordered the same meal – scrambled eggs with sausage, bacon and Disney’s delicious cheesy potato casserole. Sharon checked on us often and asked us if she could bring us more of anything. Since there really isn’t room for a buffet at the restaurant and the “tables” are too small to accommodate a platter (like is served at Akershus), I guess we could order more as we wanted. We were all pretty stuffed, though, so it wasn’t an issue.

While we ate, a few Storm Troopers came by to monitor our doings.

Also in the restaurant were Greedo and some Jawas. However, they were on the opposite side and working slowly through the tables. Sharon came to the rescue one more time. As Mr PugRunner took care of the check, she led us over to the cast member in charge of handling the Jawas, explained our situation and that we had to leave, and they allowed us to slip in for a quick Jawa shot.

And then we hustled over to the appointed meeting spot, arriving just in time. Others gathered and some cast members came over. They instructed us to have the kids use the facilities, reapply sunscreen and get water, and then the non-walking members of the party were directed to a roped-off area to the right of the main stage.

In the meantime, Mr PugRunner and little man actually got to go backstage! They weren’t permitted to use camera or cellphones (boo!), but Mr PugRunner said that they were right near some of the celebrities, and they were hanging with members of the 501st Legion. Not going to lie. I was a little jealous.

Finally, after what seemed like hours, the iconic theme music boomed through the crowd (goosebumps!) and the motorcade began making its way down the street. 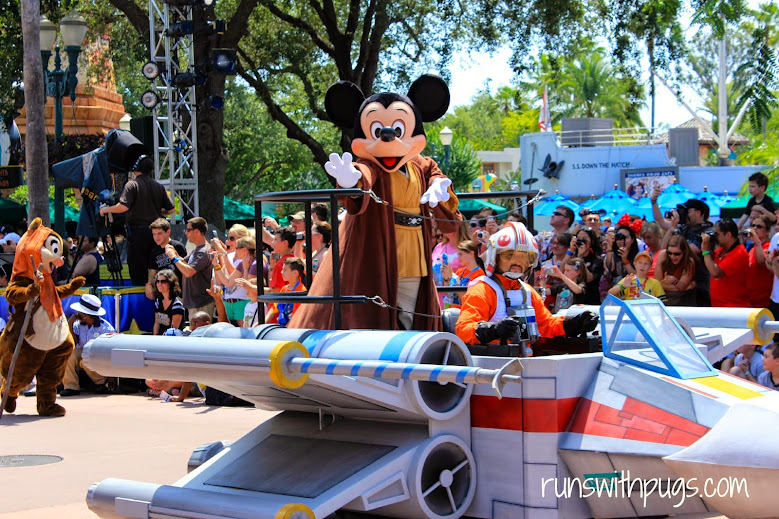 And right behind the Force-Filled Fab Four? 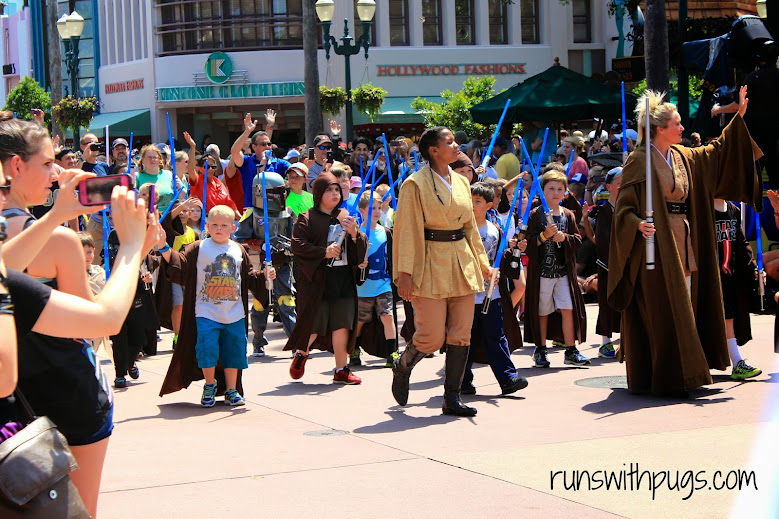 He was a natural, looking around and waving to the crowd.

The kids followed their instructors to the front of the main stage, where they lined up. And pretty much had the best viewing spot in the house for the rest of the parade to follow. 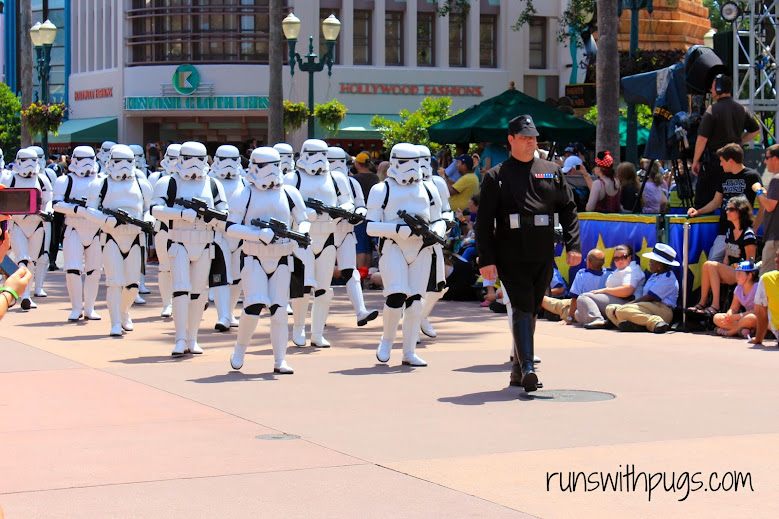 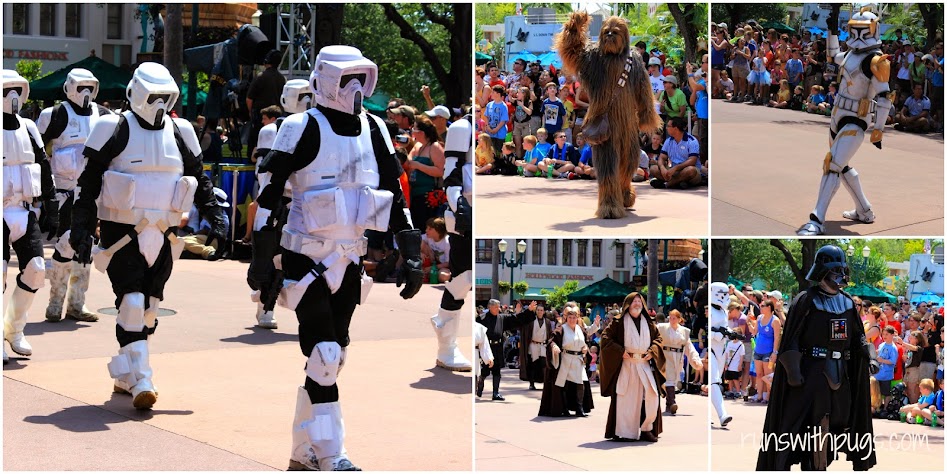 But there was an even more special guest: Mark Hamill, the original Luke Skywalker.

When the last of the paraders climbed on to the stage, the crowd surged forward into the street to get as close as they could. For a minute, there was panic, because there was nothing between the watching kids and the rush of fans. However, cast members linked arms and formed a human barricade keeping some safe distance, and James Arnold Taylor performed a singing number, introducing the characters, the VIPs and detailing some of the fun things that would be going on through the weekend.

And then it was over. The kids were escorted to a holding pen to turn in their costumes and wait for pickup.

Little man was completely overwhelmed, but declared it the best day.

At that point, I was completely hyped up and would have loved to spend the rest of the day taking in all the Star Wars-y sights, but we had to get to South Florida for dinner for my grandmother’s birthday, so we said goodbye to Hollywood Studios and went on our way.

Have you ever marched in a parade?

Are you a Star Wars fan (geek/nerd)? Which celebrity from the franchise would you be most excited about seeing?