You are here: Home / Uncategorized / unveiling the scoreboards

Since the franchise was founded in 1993, the Jacksonville Jaguars have had a rather inconsistent record. There have been some definite bright spots in the team’s history, but the last six years have been a time of rebuilding, rebranding and renewing.

I’ve always maintained that it’s hard being a sports team in Florida. So many of the state’s residents are transplants from somewhere else, bringing their own team loyalties and allegiances. It’s tough to win over converts.

When we moved to the area, we decided that we would both root for the home team, in addition to our first NFL loves (the Dolphins and that green team which shall not be named). We love football and going to game, and we are glad to support the local community. In the seven years that we have lived here, we have watched the team grow and change, but have always been thrilled to call ourselves fans.

In 2013, Shahid Khan purchased the Jacksonville Jaguars, and a new era began. Despite circulating rumors that he would sell or move the team, Khan has been a very visible and passionate owner, doing his best to allay those fears, while helping to grow the franchise and the entire Jaguars experience. He has been accessible to fans, vocal about his plans for improvement and, in my humble opinion, has made positive strides in developing the football community in Northeast Florida.

On Saturday night, we were invited to an amazing event at Everbank Field, to celebrate the newest changes to the venue. Not only would we see a soccer match between DC United and Khan’s own Fulham FC and a live performance by Carrie Underwood, but we would witness the unveiling of the world’s largest video boards. Measuring at 362 feet wide, these boards are part of a $63million renovation package, which also included new swimming pools and cabanas on the viewing deck at one end of the field.

It was pretty exciting.

I really wasn’t particularly interested in the match, but it was fun being out at such a great event, being among the first to see the massive new boards.

Right before eight o’clock, a stage was erected in the middle of the field, and some of the Jaguars administration and local politicians begin making their speeches.

And then, beneath the glow of the setting sun, we counted down. 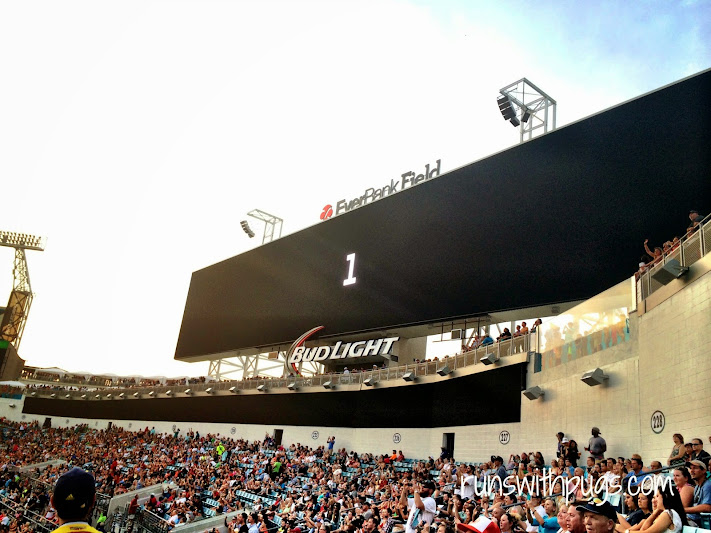 The montage that played was beautiful, highlighting all the things that are special and wonderful about Jacksonville. The screens were brilliant, vivid and crystal clear. I don’t think the unveiling could be considered anything but a triumph.

I can’t wait for football season to start.

Not long after, the concert began. Carrie Underwood was lovely. Even in a huge, open-air venue, her voice carried beautifully, and for those that were too far to see her clearly, one had only to look up to the screens for a clear view.

We ended up leaving a little early (we were exhausted and needed to be back at the practice field for training camp early the next morning), but it was a phenomenal show.

Do you support your local teams?

What do you think of the new swimming pools at Everbank Field?