Read about Day 1 of Tour De Pain and the 4 Mile Beach Run here.

Of course, with my awful sleeping, I was awake before the alarm rang, way too early, on Saturday morning. The course for the 5K road race was much closer than last night’s race, so we didn’t have to really rush, but with a 7:00 AM start time, we needed to be out the door by 5:30 or so.

I’m not going to lie: my stomach was unsettled. Not just because of the 5K, but because of the 5K, and having to make it home for a birthday party, then regroup and take little man back to his grandparents’ for the night and then make it downtown for the one mile sprint, all under the threat of thunder storms. It was a lot for me to process, which was probably for the best in a way, because I wasn’t focused on the actual running part of things.

All that to say I had to use the port-a-potty twice – there weren’t that many and the line was pretty long the second time. In fact, I was actually afraid I would miss the start of the race.

Fortunately, I was able to get in and out and line up with minutes to spare. Eeek.

However, I do think that burst of adrenaline and fear helped my running overall, so I can’t complain. The course was a flat, shaded loop down a main road and then through some residential streets. I felt pretty comfortable the whole time, but stopped once for a quick sip of water because I was getting thirsty. What made my day was the family who had set up a table in their driveway right after the official water stop. The kids were handing out what looked like pink lemonade. I didn’t take any, because I didn’t know what it would do my tummy, but I waved and thanked them for being out to cheer us on. It was really cute.

After the race, we didn’t hang out long.

We had water and I snagged a banana for each of us to have for later.  Then we grabbed bagels and coffee (iced for me) from Dunkin Donuts on our way home to shower, change and get ready for little man’s friend’s birthday party.

It was nice to get some downtime with friends and let the kids play arcade games and chow down on pizza. I was definitely sorry to have to pack it up and head out.

At home, we changed into running clothes, packed our race bags (again) and loaded up the car to bring little man back to his grandparents’ for the night. We chilled out there for a little while, before leaving for downtown and the One Mile Sizzler. I was very anxious about parking and the weather.

And, let’s be honest, I was losing my mind over having to sprint one mile.

I am not a sprinter. From day one, I have had distance in my sights, not speed in shorter bursts. I can’t breathe correctly on a good day, let alone for something like this. The intimidation had a firm hold on me.

The closer we got to downtown, the worse things got. The clouds were rolling in fast, thunder was rumbling, and there were definite stabs of lightning forking through the threatening skies. We were about 90 minutes early, and it looked like the race organizers were setting up for a go ahead.

We parked and walked around a bit. The rain was sporadic, but frequent peeks at the doppler seemed to show that the storm would be passing us by. The big benefit of the rain and clouds was that the weather had cooled significantly. It was still humid, don’t get me wrong, but not having the late afternoon sun beating down on us would be a a blessing.

As we waited for our friends, we tailgated a little.

We kept a wary eye on the weather.

As we met up with our group, we moved our way down to the staging area. The Sizzler would be a double loop around one city block, next to the Jacksonville Landing.

It was organized in four waves: Master’s Men at 4:30, Open Men at 4:45, Master’s Women at 5:00 and Open Women at 5:15. The waiting was awful. For some reason, I had it in my head that I wasn’t going to finish. That they were going to run out of medals before I crossed the finish line. That there wouldn’t be any finish line by the time I got done. I was a hot mess, and really struggled to get a grip. I blame exhaustion.

To distract myself, we chatted and took lots and lots of pictures. The threatening sky made for a powerful backdrop, and our city is quite beautiful, so it only made sense to take advantage of it. 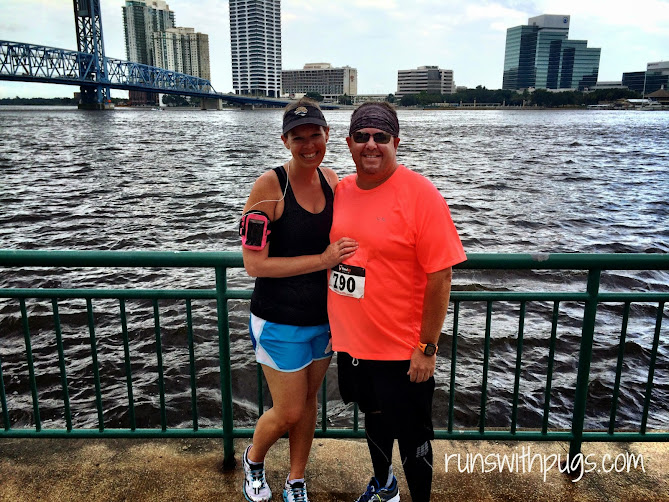 And yes. For the first time in my running history, I was wearing shorts. I bought them for Crocodile Crossing a few weeks ago and was surprised by how comfortable they were, and how not hideous they appeared on me. While I usually run in skirts, and they are usually satisfactory, I somehow felt I needed a change. On race day. While running a distance that intimidated me. Go big or go home, right?

Then, it was time for Mr PugRunner and our friend’s dad to line up. Poor Mr PugRunner learned that he is, indeed, at the ripe old age of 40, considered a “Master,” so he got to go out in the first wave.  It was absolutely jaw-dropping to watch those athletes sprint. I wanted to throw up when I saw the first finisher come in at 5:08. That’s not even human. We cheered like crazy as our guys crossed the finish line (Mr PugRunner kicked butt!), and then we cheered two more times for the Open Men and Master’s Women.

Finally, the Open Women were up. There was a sense of urgency because even darker storm clouds were rolling in and of course, they wanted everyone done in case of lightning.Once again, our time would be from the gun, so I lined up as close to the front as I dared. My stomach was in my shoes. I’m pretty sure I was shaking. I needed to run.

When the gun sounded, I sprang out. I know it was way too hard and way too fast, but that was the point: run as fast as you can and vomit later. In my head, I had it worked out. Eight lengths of street and then straight through the finish. I wish I could say I ran the whole thing. I can definitely say I ran most of it. It was hard and it hurt and the crowd on the streets was so close and so loud, even over the music in my earbuds. My legs were in it, but my lungs and throat weren’t (because they never really get on board for these moments), but I did what I could, and somehow, I managed to finish at 10:09.

This picture pretty well sums it up. 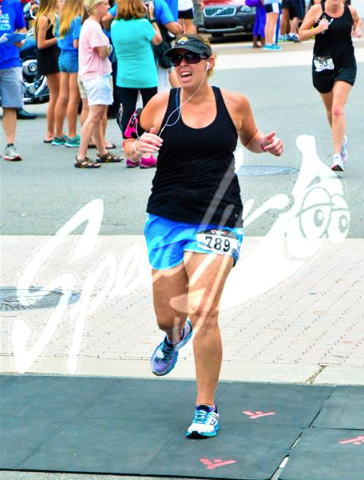 Obviously, I had no idea there was a camera anywhere near me.

I didn’t see Mr PugRunner, and the crowd was so tight, with people in line for pizza and beer and cookies. I had to get away, and found a tiny patch of curb behind one of the race company’s trucks, so I could just take a few minutes to sit and decompress. I was fine, just overwhelmed and so very happy to be done.

When I rejoined the group, we were ready to celebrate! We got our complimentary beer, but I couldn’t stomach the pizza at that moment, so I got a cookie instead. 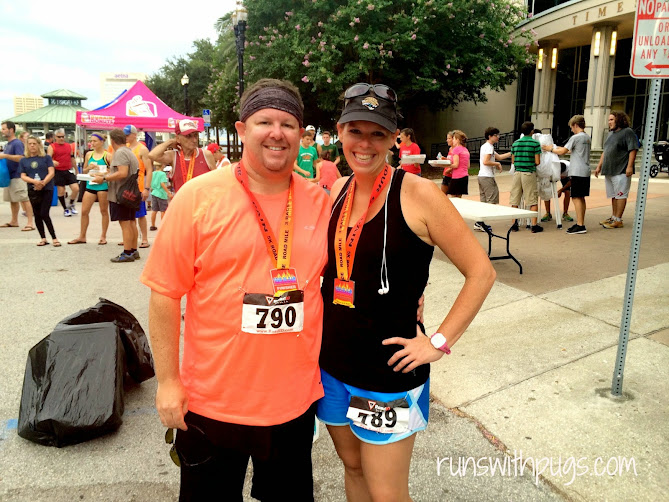 We pulled up a piece of curb and waited for the awards presentation. Our friend T won third in her age group! Rockstar!

At this point, I think we were all just flat-out exhausted. Twenty-four hours of being mentally “on” for racing can do that a person. We said our goodbyes and Mr PugRunner and I decided to get dinner at one of the Landing restaurants. Zoning at the bar was just what we needed.

All in all, it was quite the experience. I actually really liked it (except for the lead up to the Intimidating Mile). I don’t think it’s a race series I would feel compelled to do every year, because it’s hard and brutally hot and really leaves you drained, but I also wouldn’t mind doing it again, either.

Everything was well organized. The volunteers were wonderful. There were plenty of water stops and water at the finish line (although it would have been nice if they had more water on ice). I didn’t notice if there was food after the 4 Mile Beach Run, but there were  Dunkin Donuts, munchkins, bagels and bananas after the 5K Road Race and munchkins, pizza, cookies and beer after the 1 Mile Sizzler. The only thing I really didn’t love was the gun-timing, but I did my best to compensate for those lost seconds and it wasn’t a huge deal.

Summer racing in Florida is serious business, and Tour De Pain was no exception. In spite of it all, it felt good to take part and push myself in a different way. I don’t know if major “series” racing is for me, but I enjoyed the challenge and overcoming the hurdles that are uncomfortable for me.

Is there a distance that particularly intimidates you?

How do you distract yourself during the wait for a race to start?