I was pretty excited for this day to arrive. The Space Coast Half Marathon is, perhaps, my favorite race. It was, after all, my first half marathon, and I think that first one really sticks with you.

I was also excited that Mr PugRunner would be sharing in the experience, running his own race. Even though he had been so sick, I was hopeful that he would enjoy his first half marathon and all the trapping of a really, big race. To this point, he has mostly run smaller, local events, so he would be contending with the extra layers of travel, a larger field of athletes and more general hoopla.

We hit the road after breakfast. The ride was about two hours long, and the expo was located in the convention center of one of the race’s host hotels. This was a major change from last year, when the expo was held at Kennedy Space Center, to many complaints of overcrowding and limited vendors.

With an increase of the cap of racers in 2014, I was interested to see how the new venue would fare.

I’m going to be honest. I think they need to go bigger.

Bib pickup was pretty neatly organized, actually. Runners could have gotten their bib numbers ahead of time, or consulted the printed lists posted at the entrance to the expo and then proceeded to the appropriate marked pickup “window” to collect their bib, informational brochure and safety pins in a sealed bag. That part was smooth sailing.

There were two computers set up near packet pickup to test the electronic timing tags, and I think there was supposed to be a snaking line for that, but the area was incredibly narrow and there was really no direction, so people scanned as they could.

T-shirt pickup was a whole different story. Rumor had it that there were some serious issues with the printing of the t-shirts, and that organizers were out of women’s small and men’s large. Runners could select alternate sizes at the expo or sign up to have the proper shirt mailed to them 30 days later. My shirt size wasn’t an issue, but it was clear that people were getting pretty ornery. I do have to say that the volunteers remained smiling and pleasant as they fielded questions, complaints and concerns and I hope that the race organizers are able to make good on their promises for proper shirts. Because they were pretty cool.

As far as vendors… Again, things were a little limited. Mr PugRunner was able to get a wicking headband, and I was able to finally try on a Sparkle Skirt for size, but I had to fight traffic to get to the Galloway pacing table to see about running with a pacer and it took forever to wrap around to the last few booths. There was very little official Space Coast Marathon merchandise available, and the area was so crowded that it was nearly impossible to browse.

Photo opportunities and medal displays were located in an adjacent room. It would have been nice to see some more vendors in there, instead, but we were happy to get our pictures. 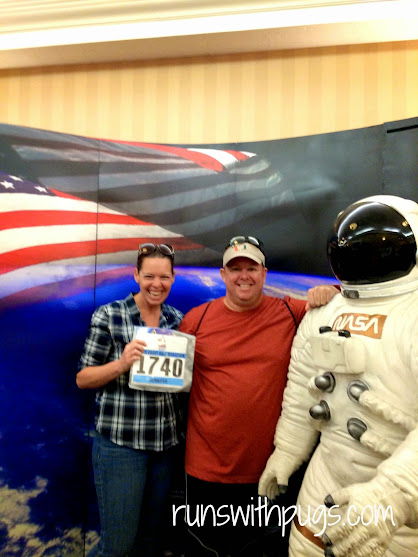 I can think of so many vendors who would have done so well at this expo. And because of the size of the field and the fact that this race draws so many people from all over the country, I think the game needs to go to the next level. I’m pretty sure everyone was expecting some growing pains – from what I understand Space Coast used to be a very small, local race that blew up with the advent of their amazing Big Bang Medal Series, and the race organization has been playing keep-up ever since. In fairness, I think they are doing an excellent job of handling the quick growth and all the challenges that come with it, and I have no doubt they will work out the kinks as they go.

We were both getting hungry, so we decided to pull out. A Mom on the Run’s Kristin and her husband were on the road behind us, and so we decided that we would go check into the hotel and find a place for a quick bite.

After last year’s experience with a somewhat seedy hotel, we booked early at the Four Points by Sheraton Cocoa Beach.

It was really nice, if a bit far from the race staging area, and the staff were incredibly pleasant and helpful. The room was clean and the beds comfortable, and that was pretty much all we needed.

Since we hadn’t seen anything particularly appetizing on the drive over from the expo, we decided we would get some appetizers downstairs at The Shark Pit Bar & Grill. Everyone wanted to watch the FSU vs UF game, and there were plenty of TVs to do so. Kristin and Mr AMOTR arrived and we shared some snacks and a few beers. We didn’t really want a full lunch because we were looking at a 3:15 AM wake up call and needed to have a solid dinner and get to bed early.

At halftime, we abandoned our plates and made a move towards dinner plans. We tried walking a few blocks to a local Italian place, but it was slammed, so we hopped in the car and drove to the same Carrabba’s we dined at last year. Being a creature of habit, I ordered the same dish (mezzaluna) and enjoyed a glass of red wine to calm my nerves. The four of us ate at the bar, which was nice, and finally, it was time to get back to the hotel and get some shut eye.

We had decided that we would take the shuttle provided by the host hotels to avoid parking issues. The first shuttle was scheduled for 4:15AM, and me, being anxious about getting to places on time, intended to be on it. Mr PugRunner wanted to watch some of the Hurricanes game, but sleep was more important to me. I set out my outfit

and shut it down.

For some bizarre reason, I woke up an hour later with my heart pounding and it took me FOREVER to get back to sleep. It’s an awful feeling to see the minutes ticking by, knowing that you need each and every one of them to perform at your best, but finally, I drifted off with visions of PRs dancing in my head.

Stay tuned for Part 2 of  my Space Coast Half Marathon race report, coming up tomorrow!

Were you at the Space Coast Marathon/Half Marathon this year?
What do you think makes a successful race expo?

PS –  Don’t forget ZOOMA’s awesome Winter Flash Sale. From now until Sunday, 12/14/14 at midnight EST, use code JENN15 for 10% off ANY 2015 ZOOMA race registration! Run with me in January in gorgeous Amelia Island, Florida, or grab your friends for an amazing racecation in another location!