And the countdown continues. Everyone I know said that marathon training though the holidays would be hard, and they were 100% correct. This week, my motivation is so very low. And, you know, I think that’s ok. I’m spending time with family and enjoying our holiday traditions, and generally soaking up all the Christmas we can. I think I’ve hit the resignation stage. Which will be closely followed by panic, I assure you.

That’s where the fun will REALLY begin.

After a hotel breakfast, we wandered around Universal Studios. We did some more rides (Nana got on Transformers, which was amazing since she can’t handle thrill rides at all), and called it quits after a lovely lunch. 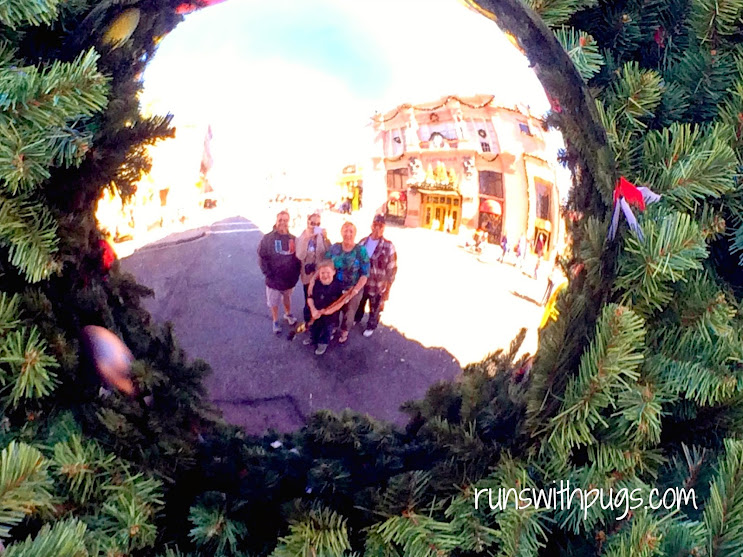 We made it home in time to stop at the tree lot for our Christmas tree, and then to get the laundry done and get little man packed off to bed for his last week of school.

I started the holiday baking on Tuesday. It was pretty intense, but worth it.

It felt great to get in this run, because my parents were coming over later, bringing with them a traditional Hanukkah feast. Yum.

There was also a menorah lighting nearby, so we went to check that out. It was small, but very nice. They had music, latkes and sufganiot. The rabbi gave a beautiful blessing and the light from all the candles was gorgeous. I think Papa Bear appreciated it, too.

Apparently, it was “Grinch Day” at school. I wasn’t entirely sure what that meant, but I sent little man out in his Grinchiest t-shirt and waited for news. Apparently, the Grinch himself came to visit, and the kids made all kinds of awesome Grinch projects. Most notable? This Grinch dust for Christmas Eve. 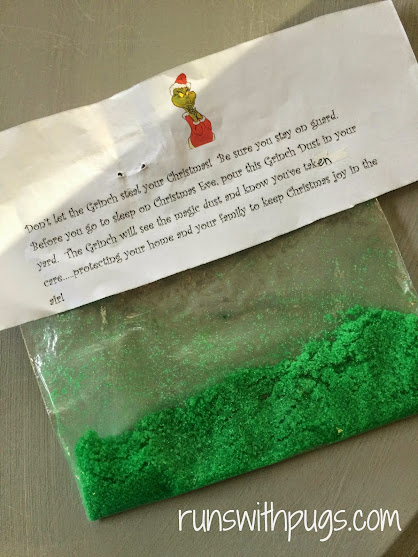 And the adorable Grinch mask and collar with heart. Little man loves the mask but claims the collar is too itchy. He did humor me for one photo, though. Please note the Grinchy face and hand gestures.

Later that night, Nana and Papa Bear met us for dinner at a burger joint and when the sun set, we checked out a neighborhood that boasts absolutely gorgeous Christmas light displays.

Absolutely phenomenal. I would love some of those star lights for our yard next year.

First mission of the day? Finish. That. Tree.

It was also little man’s last day of school so they were having their holiday party. It also doubled as a farewell party for his teacher, who will be moving to a new position in the district. So bittersweet because we loved her to pieces. We got to meet his new teacher, as well, and she seems really sweet, so hopefully the second half of the year will be as wonderful as the first.

I was a little mopey the rest of the day, but Mr PugRunner made us pizza, and we watched The Santa Clause, then hopped in the car to see some more of our local lights.

Afterwards, when little man was in bed, we had a glass of wine and watched Fred Claus. So festive.

My initial plan was to go out but it was kind of nice not to have to set an alarm and the boys let me sleep in til about 8:00 or so. That hasn’t happened in a while.

We were having a few people over for a hot cocoa bar, so I got to work with cleaning and cooking.

And making these adorable hot cocoa ornaments to send home. 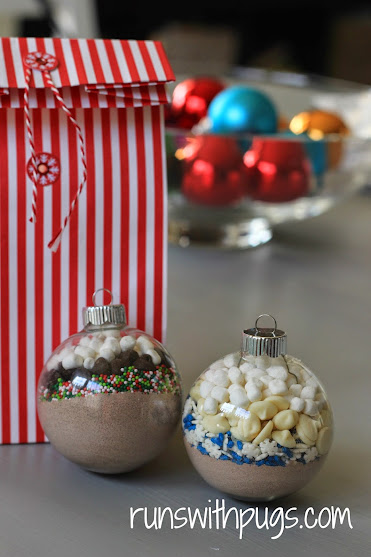 We went with a pasta bar (plain penne with a choice of sauces) and meatballs, along with this ridiculously delicious artichoke appetizer that my mom has been bringing to dinners (I could eat the whole thing).

For the hot cocoa bar, I used this crockpot recipe, and it was pretty delicious. I also found this idea for frozen whipped cream dollops, and I think it was a super cute touch (as well as a great way to help cool down the cocoa). Other touches included marshmallows, sprinkles, candy cane stirring sticks and cute straws.

Afterwards, we wound down by watching the Grinch (the Jim Carrey version, which is somehow growing on me), and by some Christmas miracle, my amazing cousin finally, finally, finally taught little man how to tie shoes! A million thanks for that, because we were pretty resigned to Team Velcro-and-Bungee-Laces.

This week, the weather has been nasty, nasty, nasty. I have 21 miles on the calendar for the weekend, and then it’s taper time. In the meantime, we have done our last minute shopping and wrapping, and I think all things are a go for Christmas Eve.

Are you ready for Christmas, if you celebrate?

What are some of your favorite holiday traditions?