So here’s something crazy.

The marathon is 13 days away. That’s less than two weeks. I’m not really sure how I’m feeling about that. I’m kind of at the point where I just want it to be done and over with. But maybe that’s my nerves talking? I don’t know. The whole thing is incredibly surreal.

Since it was kind of cool out, I took advantage and ran a few miles.

Afterwards, little man and I met up with his friend and his mom (my friend) to see Annie.

I don’t know what I was expecting, exactly, but it was cute. I think the ending was slightly anticlimactic compared to the original, but I wasn’t disappointed. Cameron Diaz was great as Miss Hannigan, though. 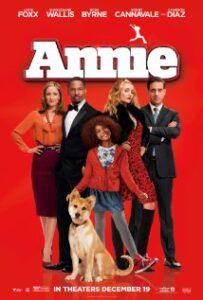 Little man wanted to spend a day or two at his grandparents’ house, so when the movie was over, I took him over there to begin his stay.

Mr PugRunner and I ended up spending a quiet night at home. It was much needed.

It was kind of nice waking up to the alarm clock. But I did still have places to go and things to do, so I headed out to pick up Papa Bear for Exodus: Gods and Kings.

I was hopeful that this movie would be incredible – I always loved The Ten Commandments when I was younger (I have a thing for sweeping epics), so I was interested to see what some technology and new special effects would do. The casting choices were questionable, but overall, I thought it was very well done and a nice nod to the original.

Mr PugRunner and I had some Christmas shopping to finish so I picked him up for our trek to the outdoor mall. We did a little shopping, and then grabbed a late dinner.

I may have rested from running, but I was on the go all day. I finished some last minute wrapping, and then it was off to pick little man up and take him to a playdate. The kids made dreidels out of marshmallows, Hershey’s kisses and pretzels, and played a ton of Skylanders and some other video games. It was some nice downtime and I hope we can repeat it during the break.

Christmas Eve! I knew I wouldn’t be running on Christmas or the day after, so I had to force myself out for a few miles. Ugh. I did 2.4, you know, for December 24. Or because I just couldn’t push myself to do more. Oh, how we justify these things.

My parents invited us over for an early Christmas Eve dinner.

It was nice to spend the day with them, and my mom made a delicious bolognese at Mr PugRunner’s request.

All too soon, it was time to get home to get ready for Santa. Little man had some wrapping to finish up, and I had to finish cookies and prep for tomorrow’s meals. We made reindeer food and read Twas The Night Before Christmas.

When little man was sound asleep, with visions of sugar plums dancing in his head, we called Nana and Papa Bear and they headed over. They were going to spend the night and surprise little man in the morning. We got to bed entirely too late, after stuffing stockings, bowing and tagging the gifts and watching a little bit of A Christmas Story, one of my favorites.

Morning was going to come early.

Little man was bright-eyed and bushy-tailed at 5:20 in the morning. Fortunately, I had managed to drag myself out of bed and into the shower a little before, so we were able to hold him off long enough for me to get the camera, feed the pugs and turn on the tree lights. Nana and Papa Bear parked themselves on a couch near the tree, and little man’s face lit up when he saw all the presents and lights. It took him a minute to realize we had extra special guests, but when he saw them? I don’t know that he could have been happier.

It was a lovely morning. Little man loved all his gifts, and was so very appreciative.

He also picked out some wonderful things for me and Mr PugRunner. His heart is so big. I loved how he told Mr PugRunner that he wanted to get me a copy of Guardians of the Galaxy, and then told me he wanted to get the same for Mr PugRunner, and kept it a secret from both of us. He was pretty pleased with himself when we opened our identical copies (we have since traded in one blu-ray for Teenage Mutant Ninja Turtles and the original Annie, so it all worked out).

One of my favorite gifts was a virtual race entry for the inaugural Best Damn Race in Jacksonville. I won’t be able to run it for real, but I would love to add the skyline medal to my collection. Mr PugRunner registered me on the sly, and soon, this beauty will be mine.

We spent the rest of the day helping little man play with some of his new toys, eating yummy things, and enjoying the company. I don’t think we even bothered getting out of PJs, which just made it so nice and cozy.

This was just a lounging around kind of day. Little man tried out his new bike a bit, and we just relaxed and basked in the post-holiday glow. Every so often, it’s nice to have a day like that.

I think I will devote a full post to this, but it was long run day. And yeah. Twenty miles. I was planning on doing 21, but it wasn’t meant to be. I was very lucky to have E join me. She rode her bike alongside me the entire time, carrying extra snacks and offering encouragement and support. I am eternally grateful for that.

It was truly one of the hardest things I’ve ever done and a lot of those doubts I had early on in my training are starting to creep right back in. Fun, right?

We are officially in the taper period. I have pretty much zero experience with this. I guess I’ve tapered a little before, but it seems like I’ve always been in active training, so I didn’t focus on it quite as much. I have a rough idea of how I plan on handling it, but in the meantime, I am freaking right out. You know that scene in Bridesmaids, where all the ladies have eaten at that questionable Brazilian steakhouse, and then Maya Rudolph is trying on her even more questionable couture wedding gown, and food poisoning hits, and she flees into the street, swathed in thousands of dollars of tulle and muttering “It’s happening. It’s happening”? I’ll spare you the video, but that’s pretty much where I’m at right now.

How do you handle the taper?

How was your Christmas? Any special running-related surprises?