As my marathon training has gone on, I have come to dread the inevitable “long run.” When I was working towards the half, the long runs were always pretty much manageable, with the exception of a bad run here and there, but I could power through eight miles, ten miles, twelves miles, refuel, shower and go about my life. If I was supposed to run long on Tuesday and had to postpone to Wednesday, it didn’t make much of a difference in my sleeping, nutrition or hydration. Things were flexible and fluid, and that eliminated some of the pressure (real or imagined).

Once I hit 15 miles at a time, things changed. My hydration had to be on point for days leading up to the big day. Obviously, because running long(er) takes significant chunks of time, I had to carefully schedule my runs. And afterwards, well… I confess to being pretty useless after long runs (Sorry Mr PugRunner, little man and pugs). Tired and listless, sometimes achy and, depending on my thoughts on the quality of said run, moody.

At this point, I feel like it’s so much more mental than physical. My body keeps going. I’ve seen that. It may be slow and sluggish and painful, but I can put one foot in front of the other, a la the “competitors” in Stephen King/Richard Bachman’s The Long Walk. My brain, on the other hand, starts to scream “Stop it! This is stupid! Don’t do this! You can’t do this!” And for me, that’s the hard part. No amount of Serial, or upbeat music or witty banter can shut that voice down. It’s soul-sucking and draining and I can’t fathom having to listen to it for much longer.

I really wish I enjoyed it more.

I have been working with the Jeff Galloway Walt Disney World Training Plan. There are three specific to the marathon and all three go up to 26 miles. After much discussion with my friends and you awesome blog readers, I determined that 26 might be too much on my body. I was hoping to hit 21, for the mental boost of getting over 20, but 20 would be sufficient as a final long run. Of course, I was feeling super ambitious after an amazing 18 mile long run, so we have to take that into account, too.

My friend E mentioned to me that we should go to the Jacksonville Baldwin Rail Trail for this run. She would ride her bike next to me and be my sherpa: carrying extra hydration and nutrition, offering encouragement and conversation and basically just keeping me company. I was incredibly grateful for the offer, but worried that it was going to eat up such a huge portion of her day. I didn’t want to be responsible for that, especially if I ended up having a hard time, but she promised it was fine, and so I picked her up at 5:45 in the morning and off we went.

We were greeted by this guy. Loudly and insistently. Also, he was gigantic. I don’t think I’ve ever seen a rooster so huge. 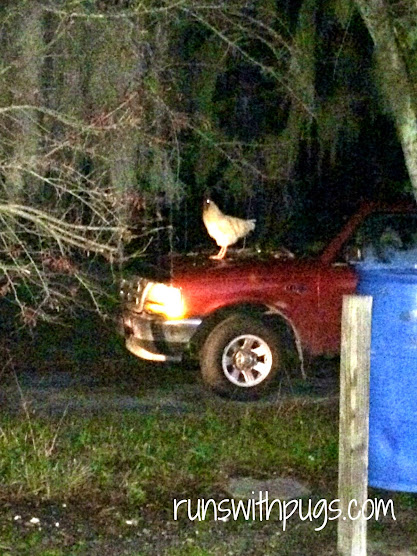 We hit the restroom in the parking lot, double-checked what we had packed, and had a good laugh when one of my bungee laces snapped. It was over my lower arch so it really didn’t feel any different.

It was time to go. 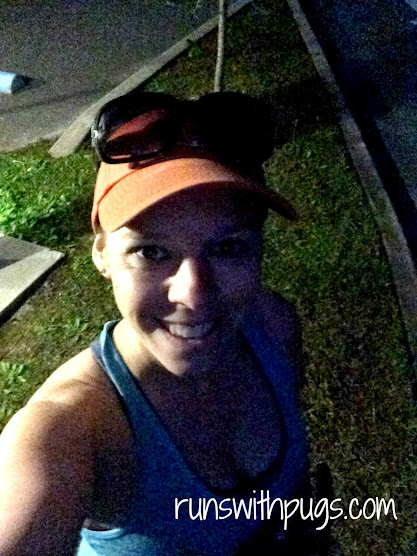 Although the temperatures were supposed to be in the 60s and 70s, it felt much cooler, and I was grateful for that. E actually had on long pants and had to pull up her hood. I wish I had thought to bring gloves, but after a while it was ok.

My pace was slow, but we decided that was probably for the best since I had so many more miles to go. There was a bathroom at six miles on the trail and I was pretty gleeful to see it.

The first ten miles went really well. We chatted, checked out the beautiful scenery and enjoyed the quiet. 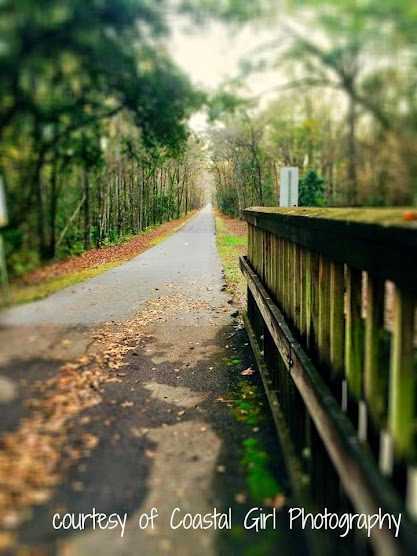 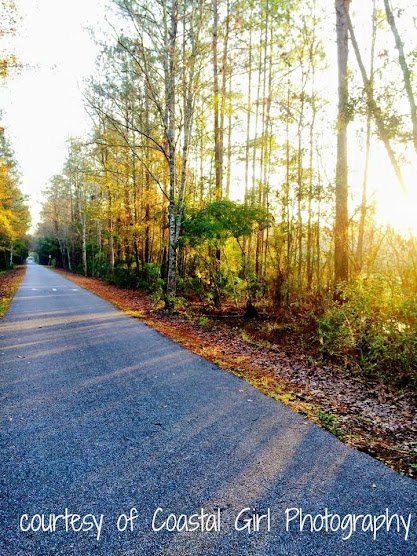 There were a few bikers and even fewer runners out, so we had the trail mostly to ourselves. I started with my Gatorade at mile six (because I had to go to the bathroom so badly LOL) and fuel at mile eight. Finally, it was time to turn around, and the next couple of miles were ok, too.

We took quick breaks every two miles so I could get down my mini Snickers. I felt fine, although I was really anxious to find that restroom again, and then I tripped on something on the trail, rolled my ankle and did something unpleasant to my big toe. Ugh.

I deflated quickly. There was no way back to the car other than straight ahead, and man, it felt like it would be forever. I had stopped talking and plugged in, first to some music and then to another episode of Serial.

Things started to stiffen up on me, and I’m not ashamed to admit that I almost started crying at mile 17. I took a kind of long walk break (maybe half a mile), and told E that I was really afraid of being picked up by that sweeper bus. I just couldn’t conceive of having to do all this PLUS another nine miles. She was very kind and told me to take my time and do what I needed to do – however we got back to the car was fine.

I took a last break for some cheez-its (it was a salty snack that sounded better than pretzels when I packed), and made the decision to set my phone interval timer to 1:00/1:00. I didn’t think I could handle 2:30 of running at that time, but anything was better than straight walking. I felt my legs loosening as we went, and I was able to take out my ear buds and chat and joke again.

At one point, we passed a group of guys, who must have been training for a trip (we had seen them on bikes earlier, and now they were running – one of them and a great sense of humor and had called out how unfair it was that I was running while E was biking). E yelled out “Hey! This girl just ran 20 miles!” and they all clapped and cheered. Which almost brought me to tears again (I swear, I’m not a crier. Running makes me leak).

And then it was over. OMG 20 MILES! Who would have thought that I would ever be able to complete that kind of distance in one shot? 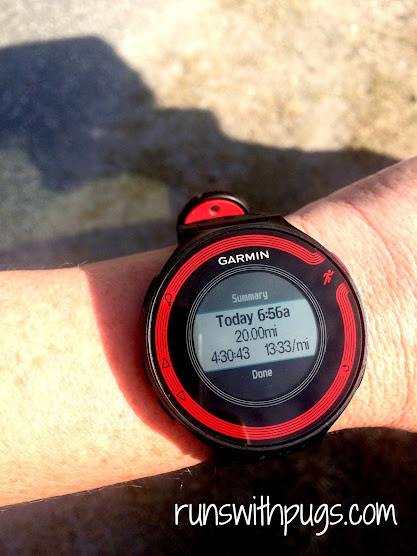 But it was still discouraging. My 18 miler had been so great and this was just so awful. I tried to be an optimist and told myself that it’s better to have a bad run now than on the big day, but it still stings and leaves the window of doubt wide open.

When I got home, Mr PugRunner had picked up some chocolate milk and a Publix sub (turkey and swiss and all the veggies). It was perhaps the best food I’ve ever tasted. 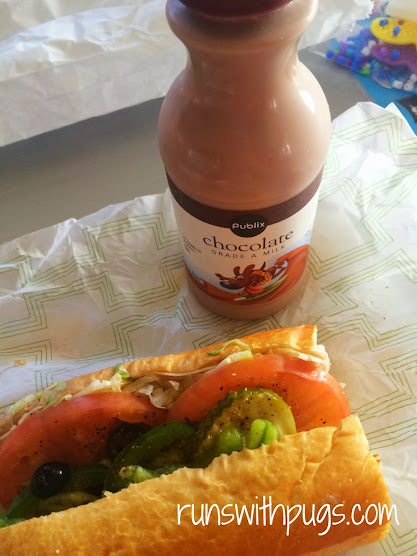 And then, little man and I climbed into bed to watch Teenage Mutant Ninja Turtles. My adrenaline was too high to doze, but this little girl picked up the slack for me. 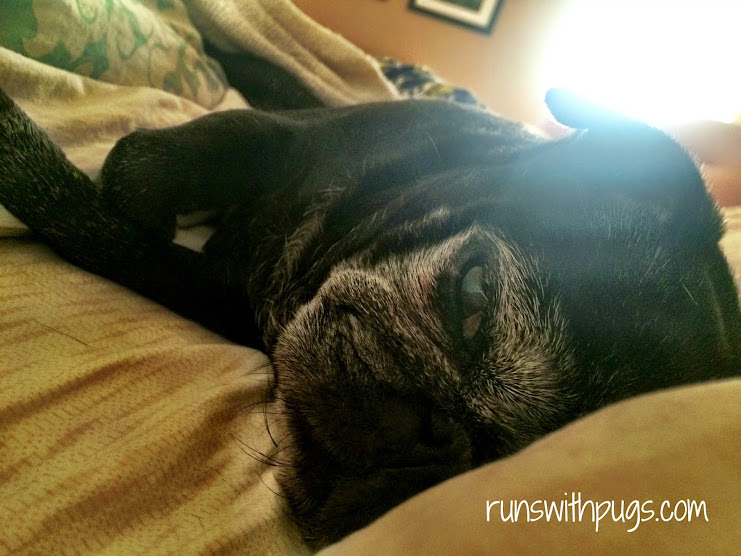 I don’t know what’s going to happen at the marathon. I know what I’ve done so far, and I hope that it’s enough to get me through. I really don’t think there is any kind of training that can prepare a person for what an actual 26.2 race will be like, so I have to be ready for that unknown, too.

Now we begin the taper. I am looking forward to some shorter, easy runs, and also to putting in some miles at the ZOOMA 10 Mile Training Run on Saturday (don’t forget to RSVP here if you plan on joining us! And if you still haven’t registered, please use code JENN15 to save 10% on any of the Amelia Island distances).

Time to sit back, sort out my packing list and get my mind focused.

Do you love marathon training or do you prefer other distances?

What are some things you do to help combat the fear of the unknown?